Green Shoots Are Appearing For Ireland, Now We Need The Patience To Let Them Grow

It truly felt like the beginning of a new era in the buildup to Stephen Kenny's first game in charge of the Republic of Ireland.

A UEFA Nations League game against Bulgaria wouldn't usually garner much excitement, but this was the start of something. It was hoped that the new Ireland manager would introduce an exciting, progressive brand of expressive football, one that the nation's supporters could be proud of.

Stephen Kenny will still want to do that. Last night's game just showed that it will take time.

There were some signs of encouragement during the draw in Bulgaria. Rarely have we seen an Irish team keep the ball so well, ultimately ending with 63% possession in the contest. The opposition has to be considered here, but we have far too often seen Ireland fail to complete even basic passes against a similar standard of opponent.

It was clear right from the kick-off that Ireland would be more adventurous on the ball. Inside the first minute, Shane Duffy took off on a solo run into the Bulgarian half. That was something he would attempt on a few occasions.

Darren Randolph kept the ball on the ground as often as was possible, while John Egan showed immense calm in possession. The Sheffield United man's performance will certainly offer plenty of encouragement, with his manager previously hinting that Egan's proficiency on the ball will be a key part of his game plan. 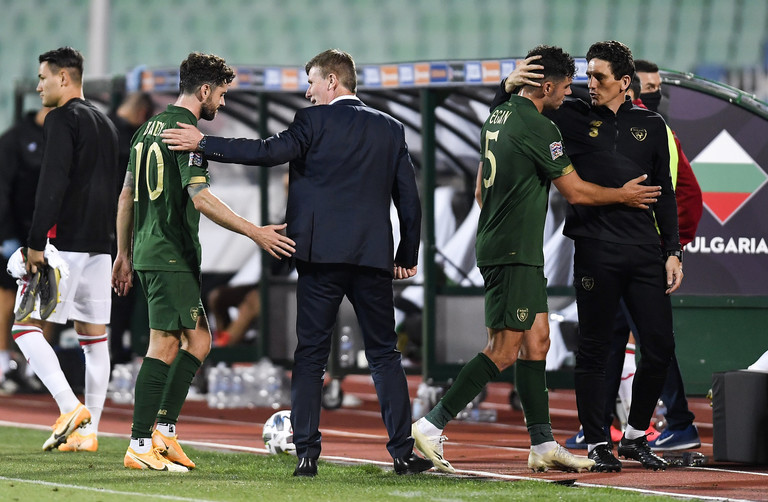 That being said, Ireland may have retained possession, but they didn't move it quick enough at times. There was often a lack of options when playing out from the back, while some players had a tendency to take an extra touch instead of moving it first time.

That will likely come with more practice in this system. The timing also wasn't ideal, with this fixture coming before the return of the English domestic season, ensuring a lower standard of fitness and intensity.

Stephen Kenny's system had a big impact on the way Ireland played. The formation was far more fluid, with players constantly swapping positions. Conor Hourihane often found himself on the left wing, while the fullbacks drifted infield at times.

We didn't quite see the benefits of that on this occasion, but it should should be another thing that comes with time.

Aaron Connolly will be key in that.

While he didn't have his best night in front of goal, the forward looked incredibly dangerous for most of the 90 minutes. His ability to run in behind or beat a man on the dribble is something we haven't had for quite some time on the wings, with the Galway native possessing all the traits you would want from a modern wide forward.

A theme in what is discussed above is Ireland's ability to improve in the long-term, but how can Kenny get more immediate results?

One way could be to make more use of the fullbacks. Matt Doherty and Enda Stevens are amongst the best in the Premier League in their respective positions, but neither impacted last night's game in the way they would have wanted.

Both thrive on their ability to make overlapping or underlapping runs into the opposition penalty area. Hourihane seemed to occupy any free space on the left wing, and while this offers another crossing threat, it does hinder Stevens' ability to get beyond the midfield.

On the other wing, Jeff Hendrick's and Callum O'Dowda's propensity to cheaply concede possession had a major impact on Doherty's display. If Ireland are to create more in attack, it is hugely important that their fullbacks become more involved in the final third.

Then you have the Robbie Brady factor. 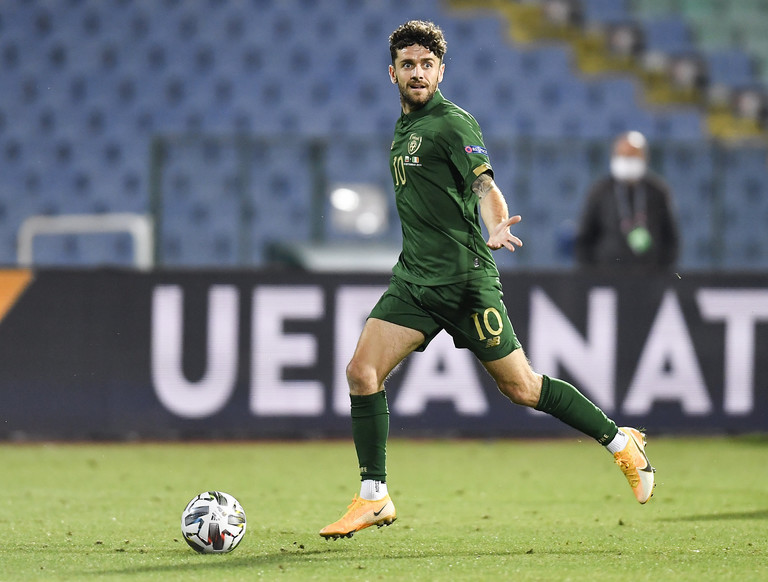 The Burnley midfielder was excellent after his introduction, offering the type of incisive play that was lacking up to that point. He assisted the goal and had already put in a couple of beautiful deliveries prior to that.

Stephen Kenny has openly said that Brady is a player he wants to get the best out of, so you would imagine he will consider bringing him into the team for Sunday's game against Finland.

What position he could slot into remains to be seen. He was thoroughly impressive operating from that central midfield role in Sofia, although Kenny may be reluctant to break up the trio of McCarthy, Hendrick, and Hourihane. O'Dowda was poor on the right wing, so perhaps that's where he comes in.

Either way, Brady has to be in the team for Sunday.

The draw in Bulgaria offered plenty of encouragement, but also a reminder of the work that lays ahead. This will be a long process for Stephen Kenny, the next step in which comes in the form of a meeting with Finland.

Three points would be a bonus, but growth is what is important. Hopefully, we can get both.

Football
2 weeks ago
By PJ Browne
'Brighton Have Been Fantastic. Graham Potter Is A Brilliant Football Man'
Previous Next

Football
1 week ago
By Donny Mahoney
The Depressing Stat That Captures The Extent Of Ireland's Goalscoring Woes
Football
1 week ago
By Balls Team
'It's Hard To Believe That We Didn't Score'
Football
2 weeks ago
By PJ Browne
'Brighton Have Been Fantastic. Graham Potter Is A Brilliant Football Man'
Popular on Balls
The Rewind
16 hours ago
By Donny Mahoney
The One Truth Soupy Norman Knew About Dublin That Dubliners Are Still Too Afraid To Admit
6