Ireland's Favourite Footballer Has Been Decided By A Landslide Vote

It's 40 days until Ireland step on to the Stade de France pitch to play Sweden in their opening game of Euro 2016.

Expectations for this tournament are somewhat tempered by what happened four years ago. Still, optimism is high among Irish fans.

According to a survey conducted by Life Style Sports, 49% of Irish fans believe Martin O'Neill's side will progress beyond the group stage at Euro 2016. An even more optimistic 23% think we'll make the quarter-finals while 12% - these are possibly the most positive people in the country - think we'll win the whole thing. That 12% also, probably, believe Fine Gael and Fianna Fail can make it work long-term.

Fans were also asked for their favourite current player. There was a landslide winner - Shane Long.

51% of fans opted for the Tipp man who is in the best form of his life right now. Hero of the playoff with Bosnia, Jonathan Walters finished second on 21%, while captain Robbie Keane was third on 13%.

As always when Ireland qualifies for a major international tournament, Euro 2016 fever is going to hit the country this summer. 28% people said they would miss their own wedding to support Ireland this summer.

Irish supporters always add colour to a major event. Four years ago at Euro 2012, one flag carried by Irish fans came to prominence, especially in Germany. The 'Angela Merkel Thinks We're At Work' flag has been voted as the best of Euro 2016 by the Life Style Sports poll with 30% of the votes. In second came 'Fuck The Recession, We're On A Session' (27%) and in third was 'All Night Long' (25%). 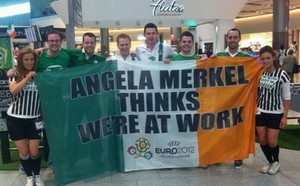 Read: Shane Long Is Playing The Best Football Of His Life And Europe Should Be Very Afraid