20 years ago today, Ireland took one of their most famous scalps at international level, conquering the might of the Netherlands on their way to qualifying for the 2002 World Cup.

It was a famous day with so many iconic images. Jason McAteer's goal. Roy Keane's crunching tackle. The infamous handshake. It was a special day in Lansdowne Road, and we set out today to get the best stories from fans who were there on the day - and those watching from afar.

Ireland v Netherlands 2002: how the country experienced it

We put out the call this morning, asking for your best stories from the day Ireland took down the Netherlands in 2001, and the responses didn't disappoint.

The Dutch team that arrived in Dublin 4 on the 1st of September 2001 made for daunting reading. Just six years previous, Patrick Kluivert had scored the winning goal in a Champions League final, and he started against Ireland alongside Premier League stars Jaap Stam, Marc Overmars, Ruud van Nistelrooy, and Bolo Zenden. Two of the Dutch platers that day (Marc van Bommel and Giovanni van Bronckhorst) would go on to start the 2010 World Cup final.

It was a daunting task for Mick McCarthy's Irish team, with World Cup qualification on the line, and the enduring memory for many was just how much they snuffed out the threat of the Dutch team.

With a few mates at one of their gaff's, absolutely lost it from kick off, bedlam at the goal, and the whole "They're out of ideas" feeling about the Dutch in the waning minutes. Amazing day. https://t.co/JVGIZr0FG2

South Terrace, bang in line with McAteer's shot. I can still see van der Sar's face watching it go in. Pandemonium all round. Started secondary school two days later, boring everyone telling them about the day. The huge Eircom promotional tshirts were in the house for years after https://t.co/nEmFyeKUYV

I think Holland had about six or seven strikers on the field by the end of the game https://t.co/tnkCPMK6i6

Some weren't present in Lansdowne Road that afternoon, but experienced the euphoria nearby later that evening. It's a sign of how elated the country was that we could even afford a cheer for the English.

Me and a couple of mates went to see Billy Connolly in The Point that night, and some of the crowd were after coming from Lansdowne Road and brought the Olés with them. Even Billy's announcement that England were 5-1 up against Germany got a cheer, whole place was cock-a-hoop.

Meanwhile, some of those who were lucky enough to be among the 49,000 inside Lansdowne Road remembered getting perhaps a touch carried away with the celebrations when Jason McAteer gave Ireland a 1-0 lead. In all fairness, we would have done the same.

Thanks to the old man, I had a perfect seat under the pitch-side RTE camera on the halfway line. Got a bit carried away for the goal, & found myself on my knees, screaming & fist-pumping, a few feet from the touchline.

One of the best atmospheres ever at the old Lansdowne Road. https://t.co/aJMJWQUmhV pic.twitter.com/i7SmjIZ4Fj

For some, that day in 2001 was a formative experience.

My first session underage in the Goat. Ordered Cindonas in a pint glass then moved a bulmers bottle beside us and asked the waitress for another round. https://t.co/okIUtwkeIJ

But the most enduring memory of the day was the fact that the biggest Irish football game in six years clashed with U2's headline gig at Slane Castle.

Another iconic Irish cultural moment of the early 2000s, the gig in the Meath countryside drew over 80,000 people, with the big match from Dublin broadcast live on the venue's big screens before Bono and co. took to the stage.

The memories from Slane were incredible to read, with rumours flying through the crowd that the Irish team would appear at some stage during the gig to kick off their celebrations, and bedlam both when Ireland took the lead and when the final whistle went.

Watched it with 80 thousand in Slane before the U2 gig. The rumours that Bono was going to have @MCATEER4 and others on stage with them that night were flying all day. Bleedin gutted when there was no sign of them 😂☘ https://t.co/WsBJb0gksI

East Lower Stand, incredible game. Left the second the final whistle went, collected by my Mum outside the West Stand and drove without a car on the road to Slane for the U2 concert. Made it back to Club 92 with mates for midnight and may or may not have had a lock in till 6🤔🤪 https://t.co/T1hnjG25AW

Anyone who watched Ireland beat the Netherlands in 2001 will struggle to forget the day, but for the younger generation, those heights have rarely been scaled since. Here's hoping it's not too long before the newest generation of Irish fans are given memories to match those from Lansdowne Road that September day.

If you've ever spent more than 5 minutes in my company, I've probably told you that my 10th birthday present was tickets to this, my first Ireland match.

Thought it was always gonna be like that! https://t.co/g7VJjI1W6l 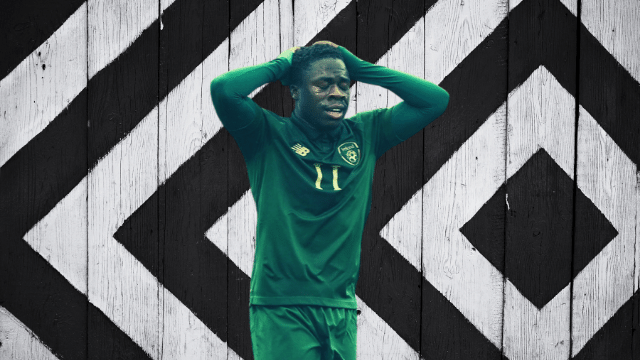