Quiz: Name The Ireland And Netherlands Teams From A Glorious Day 20 Years Ago

20 years. Bloody hell. It really doesn't feel like all that long ago that Jason McAteer's goal sent us all bananas, achieved one of Ireland's biggest ever wins, and sent us to within touching distance of a third World Cup in four attempts.

Then again, 1st September 2001 really is a long time ago. It was 10 days before 9/11 for a start! So naturally, some things have become slightly blurred by time. First of all, it was a win for Ireland that didn't qualify us for the World Cup, but for a playoff, should we beat Cyprus a month later (They did. It would be another five years before that whole mess).

Also, the result really shouldn't have been THAT much of a surprise. Early in the campaign, Ireland should have won in Rotterdam, squandering a 2-0 lead, which infuriated Roy Keane but didn't seem to bother Mick McCarthy. Jason McAteer scored a cracker that night too by the way! Our home draw with a brilliant Portuguese team also had Ireland taking the lead in the second half before a Luis Figo equaliser.

Even so, Ireland's qualification for a playoff that would be against Iran was a truly remarkable achievement, emerging from a true group of death. While we had missed out on tournament qualification in 1996, 1998, and 2000 all due to failed playoffs, even making one in 2002 was a borderline impossible project. At Euro 2000, the Dutch lost out in the semi-finals to Italy on penalties. The night before, Portugal had lost the other semi-final to France in controversial style, thanks to a 117th minute penalty. Now, two of the top four teams in Europe were somehow in the same World Cup qualifying group, and would no doubt have been irked to meet Ireland there.

Going into the game 19 years ago, Ireland were in a good place. A Portuguese win in Rotterdam earlier in the campaign had broken up a run of draws between the top three sides, and left us precariously placed two points above the Dutch. A draw at Lansdowne Road, followed by a win over Cyprus, would be enough for Ireland to knock Holland out. Instead, and with the Dutch putting five up front against 10 men and peppering Ireland's goal for the last 20 minutes, it wasn't a draw that Ireland got, but a win.

We finished the group with 24 points out of 30, undefeated, and behind Portugal only on goal difference. The team conceded just five goals in the entire campaign. It goes down as one of the finest Irish qualification campaigns of all time.

But how well do you remember that historic day 20 years ago? Have the lines become blurred for you too, or do you remember every second of a glorious day? You might have a fair idea of the Irish team, but what about Louis Van Gaal's desperate Dutch team that needed a win and came away with nothing. It was a team full of superstars, but can you name them all?

We've given you four minutes to name all 22 players who started in Lansdowne Road that day. We've thrown in the subs who made an appearance off the bench too for a couple of bonus points. Let us know how you get on. Anyone who gets full marks gets to go on stage with U2 and Jason McAteer in Slane later tonight.

(If you can't see the quiz below, you can play here) 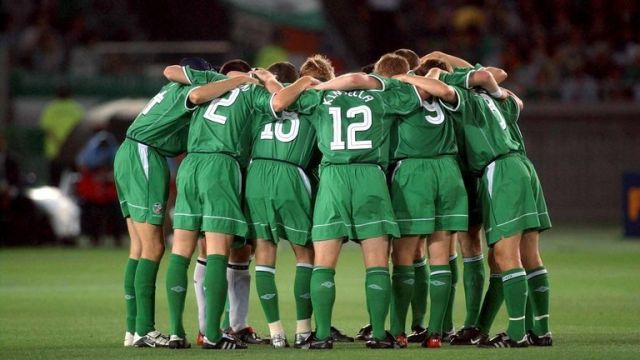 Football
5 months ago
By Gary Connaughton
Balls Remembers: The Greatest Football Advert Ever Made
Previous Next

Football
2 months ago
By Colman Stanley
In Pictures: The Joyous And Surreal Scenes When Ireland Qualified For The 2002 World Cup
Football
2 months ago
By Colman Stanley
Balls Remembers: Ireland's Journey To Tehran In 2002, An Away Trip Unlike Any Other
Football
5 months ago
By Gary Connaughton
Balls Remembers: The Greatest Football Advert Ever Made
Popular on Balls
Rugby
2 days ago
By Colman Stanley
Keith Earls Shares Story That Captures Andy Farrell's Decency
Football
1 day ago
By PJ Browne
'If He Continues With Performances And Goals Like That, Stephen Kenny Will See It'
Football
2 days ago
By Eoin Harrington
Quiz: Name Every Player To Score In A Champions League Final
Football
19 hours ago
By Gary Connaughton
Portsmouth Likely To Retain Gavin Bazunu This Month Despite Championship Interest