This Ireland Team Never Knows When It's Beaten, And That's A Hell Of A Trait

"Never underestimate them, they're a great bunch of lads."

That was Mick McCarthy's message to the media after Ireland's 1-1 draw with Switzerland. It was a night that could yet have a major say in the qualification race for Euro 2020, and one that tells us plenty about this Irish team.

In terms of quality, it was a performance that left plenty to be desired. Ireland were sloppy on the ball throughout, and failed to string more than one or two passes together for long periods of the game.

Inside the opening 10 minutes there was a sense that it could have been a long night for Mick McCarthy's side. Glenn Whelan, deployed in a holding role to plug the gaps between the defence and midfield, was badly pulled out of position four times in that period.

It left Ireland overexposed at the back, and they were saved by some strong defensive play by their centre half pairing. Enda Stevens looked very lethargic in possession and was perhaps lucky not to see red for a wild high foot that made contact with Kevin Mbabu's head.

Glimpses of real attacking intent were few and far between. Callum Robinson and Jeff Hendrick linked up beautifully on the edge of the Swiss penalty are, only for James McClean to squander the scoring chance. McGoldrick pulled off a beautiful piece of skill to round a defender, but his cross just missed Robinson.

That was about as good as it got, and their situation worsened for much of the second half. When Switzerland took the lead in the 74th minute, that was expected to be that.

But as McCarthy would go on to say, never underestimate this Irish team.

The crowd played their part. There were a few empty seats speckled throughout the Aviva, but the atmosphere was fantastic. Right from the first whistle the chants were loud and consistent. Of course there were the usual mutterings about ongoings at the FAI, but they backed the team to the hilt. 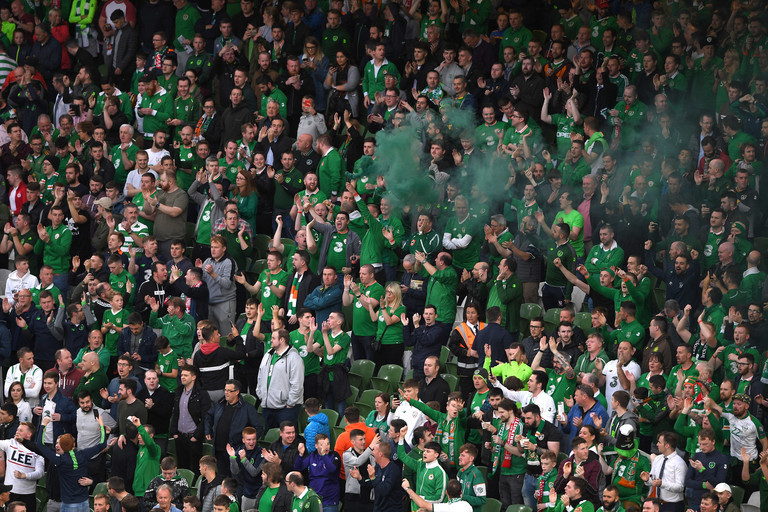 This didn't change when the Swiss took the lead.

As has often been the case for this Irish team, it took falling behind for them to start playing. Mick McCarthy made some changes too, bringing on Scott Hogan and changing to a 4-4-2 formation.

What is it in the psyche of this side that requires a deficit in order to play well? They struggle against smaller nations, but are often at our best when our backs are against the wall. We will never know the answer to that question, but you have to admire them.

Ireland lack quality at times, but there's few teams that could match their mental resolve. As Mick McCarthy put it after the game:

The nature of how we got the equaliser, going 1-0 down again like we did in Denmark, the stoic energy of the players, their durability to just keep going. They give me everything.

We're not the best team in the group, but I'll tell you what, they're going to have to put us down before we give up. That's a lovely trait.

Once they got their tails up, the onslaught from Ireland was relentless. Switzerland had crumbled under similar pressure from Denmark earlier in the group, and the Irish smelt blood.

It was fitting that it was David McGoldrick that got the goal. In many ways, he encapsulates all that is good about this Irish team. He is a player who has been written off many times during his career, only to peak towards the end when it mattered most.

His header was exquisite, as was his all-round performance. He was one of only a few players who played well throughout the entire 90 minutes.

And yet, others stepped up when push came to shove. Glenn Whelan, who had looked way off the pace all night up to this point, put his shoulder to the wheel and drove Ireland forward. Enda Stevens finally unleashed some of the attacking prowess we have seen at Sheffield United. James McClean worked tirelessly to win back possession, which ultimately lead to the equaliser.

The goal was met with an outpouring of emotion, featuring plenty of passion, enthusiasm, and joy. But despite the abject performance for 80 minutes or so, there was little surprise when the ball hit the back of the net.

This is just what Ireland do.

Opposition come here and outclass this team on a fairly regular basis, but rarely do they walk away with a win. Give Ireland an inch and they will take a mile.

A point against Denmark, a point against Switzerland, two solid results that put us on our way. On both occasions, Ireland left it late before securing the result. A negative moment was met with an affirmative response. It shows real character and bodes well four our qualification hopes.

Never underestimate them. Now imagine if we could perform for a full 90 minutes...

SEE ALSO: What Ireland Need To Do To Qualify For The Euros After 1-1 Draw Against Switzerland