Watch: New Angle Shows Ireland Should Have Had A Penalty In Belgrade

The inquest into last week’s defeats for the Irish team against Serbia and Luxembourg is destined to continue for months. Ahead of tonight’s clash with Qatar, though, a new angle has emerged of an incident from the game in Serbia – and it seems to show that Ireland should have had a penalty.

With the game finely balanced at the start of the second half, Aaron Connolly burst into the Serbian penalty area before going to ground after a challenge from defender Stefan Mitrovic. The Irish players appealed for a penalty but the referee instead signalled for a corner.

Manager Stephen Kenny was amongst those who claimed in post-match interviews that Ireland should have had a penalty, saying "the player has gone through him to win the ball. It's an easy option to give the corner rather than give a penalty." Newly released pitchside footage suggests that Connolly and Kenny may well have had a case.

The new camera angle - shot by Matt Turnbull and subtitled on TikTok by Luke Mitchell - makes it clear that Mitrovic certainly didn’t touch the ball in his attempts to tackle Connolly, and that he may well have caught the Brighton striker’s feet. Given the game was finely poised at 1-1 when the incident occurred, the Irish team have every right to feel aggrieved.

At one point, Callum Robinson appeals to the referee to check the incident with VAR, to which the referee points out one crucial issue – there was no VAR in use during the Serbian game. Stephen Kenny questioned the logic behind this after the game, asking "how can there not be VAR if there is for some matches and not others? I don’t understand how it can be for some matches and not others."

An extended version of the pitchside video was released on the FAI’s YouTube channel, which provides a great view of Alan Browne and James Collins’ goals in the ultimate 3-2 defeat.

The incident is just another in a long list of unfortunate events for Stephen Kenny during his time in charge of Ireland. Kenny has had to deal with COVID outbreaks, roulettes of coaching staff changes, and tough refereeing decisions during his ten games in charge. Tonight’s game against Qatar presents the Irish with a chance to finally record a first win under Kenny – even if it won’t mean anything to our World Cup qualification campaign.

SEE ALSO: Here's The Ireland Team We Want To See Against Qatar 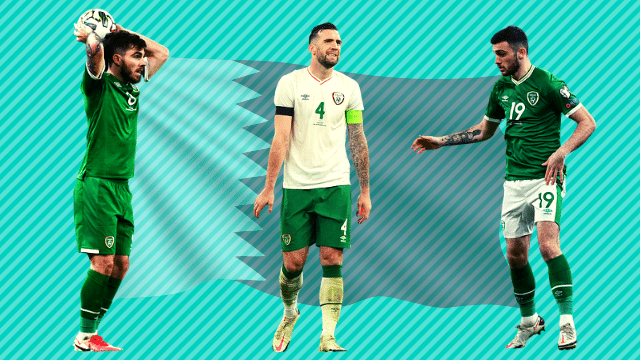