Kerr And Delaney Furious That Ireland Weren't Given "A Stonewall Penalty"

Ireland lost a heartbreaker in Faro last night. Tiredness, the genius of Cristiano Ronaldo, and the referee have become the Holy Trinity of blame for Irish fans this morning to explain how a team who led after 88 minutes managed to lose a game.

Stephen Kenny cut an exasperated figure after the game, mentioning a free kick that led to Portugal's first goal, and the fact that Ireland were being stopped from making substitutions late on.

All of that might not have mattered though is if Ireland had been out of sight by the time Ronaldo broke Irish hearts. An Ireland penalty in the 59th minute might have done the job. For this, our old friend VAR might have to come into the equation alongside the referee.

Close to the hour mark, with Ireland having withstood the early second half surge from the Portuguese, Irish goalscorer John Egan decided to go for a jog upfield, catching Portugal's defence out completely. Egan nodded a cross down to Aaron Connolly who looked free as the wind and ready to blast it in from eight yards. Instead, a challenge came late, and Connolly sliced the ball wide.

The Brighton striker, not for the first time on the night, asked for a penalty. This time VAR had a look after the referee, to nobody's surprise, waved Connolly away. On replay, it was clear that the Portugeuse defender João Palhinha clobbered into the back of Connolly as he's about to strike the ball, clearly hindering the shot. It seemed inevitable a penalty would be given. Instead, there was a sense of shock watching at home, as well as from the commentators at the ground, when the check was deemed complete and play resumed.

In the immediate post match analysis, perhaps due to the shock of Portugal's late surge, the incident was ignored. Virgin Media's highlights show did bring up the incident though. Former Irish international Damien Delaney and former Republic of Ireland manager Brian Kerr both agreed the foul had massively impeded Connolly as he taking the shot.

Should this be an Ireland Penalty?

"That is a stonewall penalty!"

Brian Kerr & Damien Delaney in no doubt that Aaron Connolly should have had a penalty tonight.#PORIRL | #COYBIG | #WCQ pic.twitter.com/wRkzhL1jqj

SEE ALSO: One Refereeing Moment Summed Up A Miserable Performance 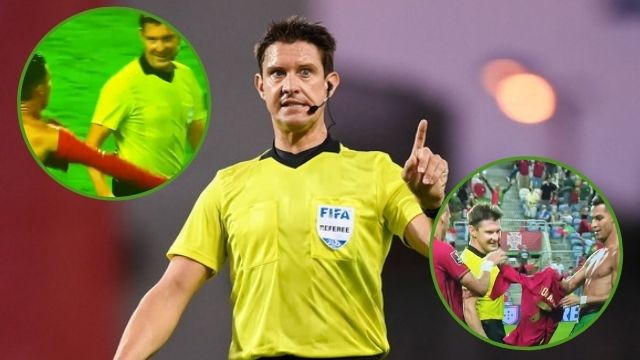