A 0-0 draw against Hungary to end the season. It's not exactly the stuff of legend but it was a game in front of a full crowd, and it was an Irish performance that showed more than a few signs of life.

One win in 13 games for Ireland under Stephen Kenny, but it's also a team now unbeaten in three games. With all due respect to Andorra, a better performance against a much better team tonight will give Kenny a lot more to go off as he goes into a long break until Ireland's next game.

There were plenty of positives on display tonight against Hungary, a team primed for the Euros next week. While Ireland never fired on all cylinders, and while there's certainly still so, so much to improve on, it's at least a positive note to head into the off-season before the World Cup qualifiers in September.

There were four Irish players starting tonight who were 20-years-old or under. There were also two international debuts off the bench, and both made a huge impact. Maybe the future is a bit brighter after all...

One of two 19-year-olds in the starting line-up again tonight, the Manchester City keeper looked assured throughout and his distribution was better than on Thursday. When he was tested finally before half-time, he made a very good save.

Withdrawn at half time to make way for debutant Caoimhin Kelleher.

The end of a season to forget for Matt Doherty, who's bound to look forward to a summer break. Better suited to the wing back position he played tonight, but not as involved as you'd like to see. Showed signs of his quality with long passing at times, but not as much as we'd like to see.

Playing on the right hand side of a back three isn't where we'd be expecting Shane Duffy to come back into form, but it was great to see him at his best tonight. Got forward well, dominated the collisions, and just looked himself. Was given man of the match by Kenny Cunningham on RTE.

Another player who's had a tough season and will be unsure of his future heading into the summer. Hopefully this performance will be a massive fillip for the Derry man. 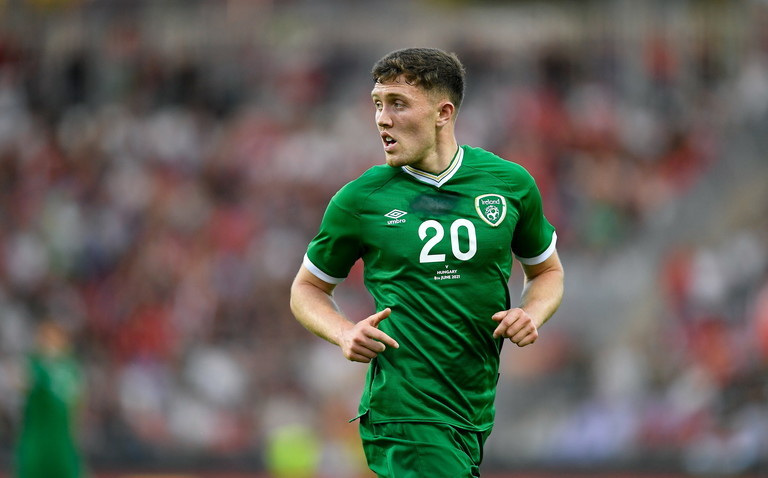 One of the good stories in a poor season for the Irish team, O'Shea is looking more and more assured in Stephen Kenny's backline. Tonight, playing on the left of the three, he was solid in defence and offered plenty going forward and, importantly, was a confident option for the goalkeeper when Ireland had possession at the back.

The Ireland captain played in his most comfortable position at the centre of a back three, and looked at home. His header in the first half, one of two chances he had, was so, so nearly an absolute cracker!

Looked very suited to the wing back position at this stage of his career. Covered very well in defence, especially in a couple of dangerous positions in the first half. McClean also got forward well, and his delivery was far better than it has been in recent times.

His set piece deliveries, especially for Egan's first half chance, were Ireland's most dangerous tonight. More importantly, Cullen improved as the anchor of the midfield from the game last week, helped by the extra body in the midfield.

Was sloppy at times as he tired late on, and was ran through a couple of times.

Still a doubt as to whether Hourihane imposes himself enough on the game in the centre of the pitch, both with and without possession. The issues was less noticeable tonight with an extra body in midfield.

As usual, Hourihane's delivery in open play and from set pieces is so dangerous. One such ball should have resulted in a goal in the first half. Taken off after 56 minutes for Jayson Molumby. 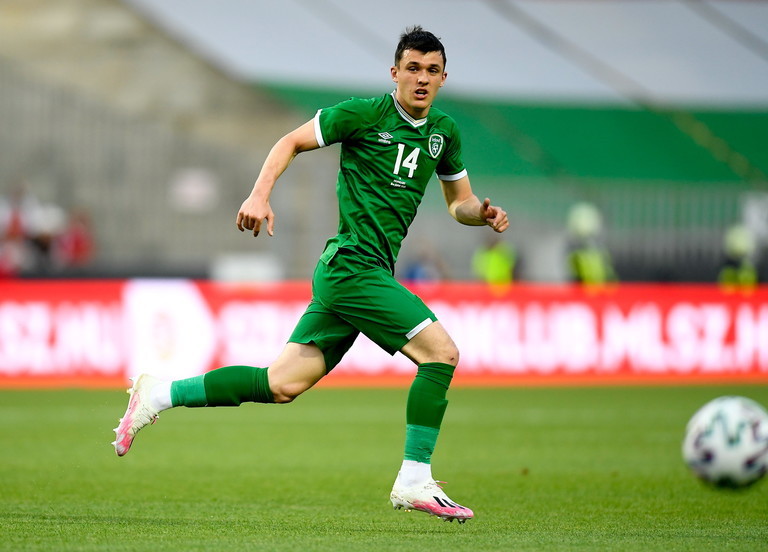 Knight seems to get more energy as the games goes on. Never stops going, and has quickly become the beating heart of the Irish midfield.

Looked Ireland's most dangerous player in attack and created plenty of danger throughout. 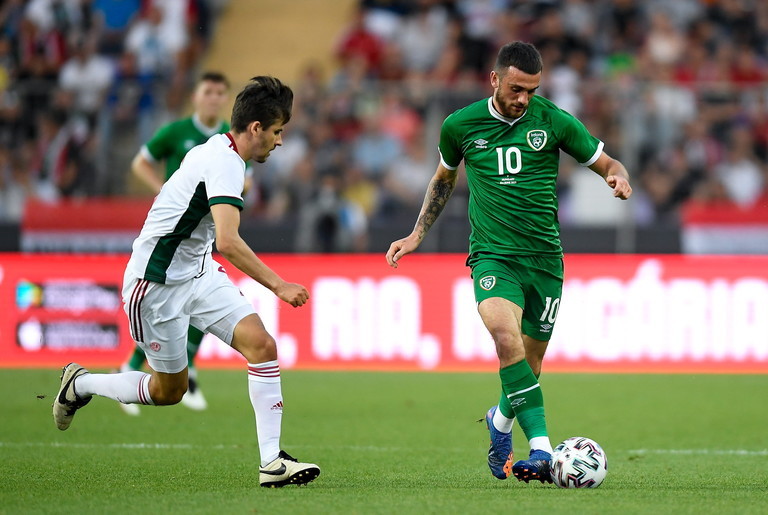 At 19, he's going to have as many nights like this as Thursday night. In this case, Parrott tried everything in his 56 minutes, showing well for the ball from his deeper number 10 position, but it just didn't click for the Spurs man. He consistently did too much with the ball, taking too much out of it before moving it on, and was dispossessed more often than not.

Stephen Kenny will be happy though that an off night from Parrott was more about things not coming off than him being completely out of the game.

It's a thankless task leading the line for Ireland at the moment.

The Norwich man did create one chance in the second half, but his 20 yard shot was easily saved by former Liverpool keeper Adam Bogdan.

While he no doubt should have passed right to Jason Knight, you can understand his decision to go for it. It's not often Idah gets a sniff of a chance playing for Ireland. As it was, he was a willing runner and remained a good option for the players in possession, even if his hold up play wasn't quite up to scratch for much of the evening.

The Liverpool goalkeeper made his debut for Ireland, coming on from Bazunu at half time. A proud moment for the Corkman and his family.

He made two very good saves within seconds of each other late on, having had absolutely nothing to do for his first 35 minutes of international football. A perfect way to get off the mark.

Part of a double substitution shortly after half-time, Horgan immediately showed energy and intent down the left hand side of the pitch, immediately creating a chance. Would have liked to kick on from there, but was quiet in the last quarter of the game.

Provided plenty of energy from the get go, but the bounce of the ball never really came his way in his 30-plus minutes on the pitch.

Not on long enough to rate, but a special mention for Ogbene who also made his international debut tonight, and almost scored with his first touch! Given how busy his three minute involvement was, we'd have certainly liked to seen a lot more of him.

SEE ALSO: Ireland Stand Strong Against Chorus Of Boos As They Take The Knee In Hungary 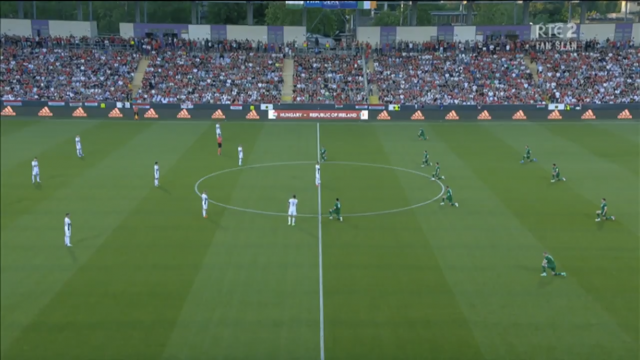 Football
1 month ago
By Colman Stanley
Stephen Kenny Defends Seamus Coleman After Carragher Criticism
Football
1 month ago
By Gary Connaughton
Stephen Kenny Names Experimental Ireland Team To Take On Lithuania
Football
1 month ago
By Gary Connaughton
Stephen Kenny Sums Up How Key John Egan Is To Ireland's Style Of Play
Popular on Balls
Rugby
1 day ago
By Colman Stanley
'I Think Munster Softened Them Up For Us': Sexton Not Carried Away After Clincial Leinster Win
GAA
2 days ago
By PJ Browne
Mayo's Padraig O'Hora Using Football To Promote His Real Passion
Rugby
15 hours ago
By Colman Stanley
'That Pace, That Intensity, That Organisation' All Black Legend Has High Praise For Leinster
The Rewind
1 day ago
By Eoin Harrington
Watch: Brilliant Dermot Morgan Dublin Segment From 'The Travel Show' Resurfaces