Started from the bottom, now we're here. With nine goals conceded in 180 minutes of competitive football, the Republic of Ireland's visit to Poland carried that bit more significance than the typical friendly. Despite being the better side overall, Martin O'Neill's had to settle for a 1-1 draw at the Municipal Stadium.

With a team bearing widespread changes, Ireland looked strikingly more organised and against their weakened opposition. It was a fixture that highlighted the difference between Nations League fixtures and friendlies, but at the very least it operated as a decent opportunity for several players to demonstrate they can perform on the international stage.

Had very little to do for the majority of the game, but tried to distribute the ball when on it which is a major change from the tactic of old.

Blaszczykowski skipped past him twice but Christie held his own going forward and worked hard throughout. Replaced by Matt Doherty midway through the second half.

Captain for the night. Poland made it clear they would target the head of Kamiński from set-pieces but Keogh proved a match for him.  Was slightly too deep for Poland's equaliser but the real problem was further out the field.

Ireland have limited options up front and several at centre-back, so it makes sense to play as many as possible. Egan earned himself a move to Sheffield United last summer and it is easy to see why. He is good in the air and on the ball. Threw himself in front of Milik's goalbound shot just before half-time and but marched forward and was bypassed for substitute Mateusz Klich's goal.

Poland didn't offer a huge amount going forward but Ireland can only play what is in front of them. 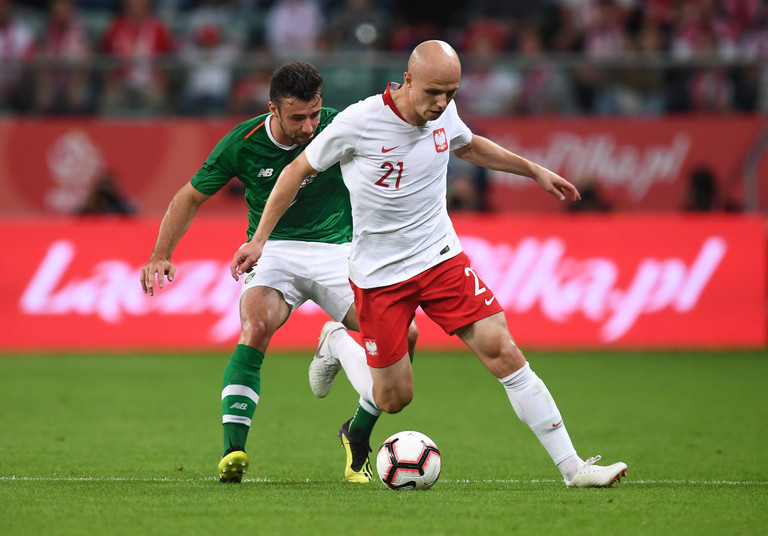 Took a hard knock in the warm-up but continued despite it and looked impressive on his first start. Ireland went with five at the back so relied on Stevens and Christie to provide width when they attacked.

Game totally passed him by, something that is becoming too regular for the Burnley midfielder. Replaced by David Meyler early in the second half. 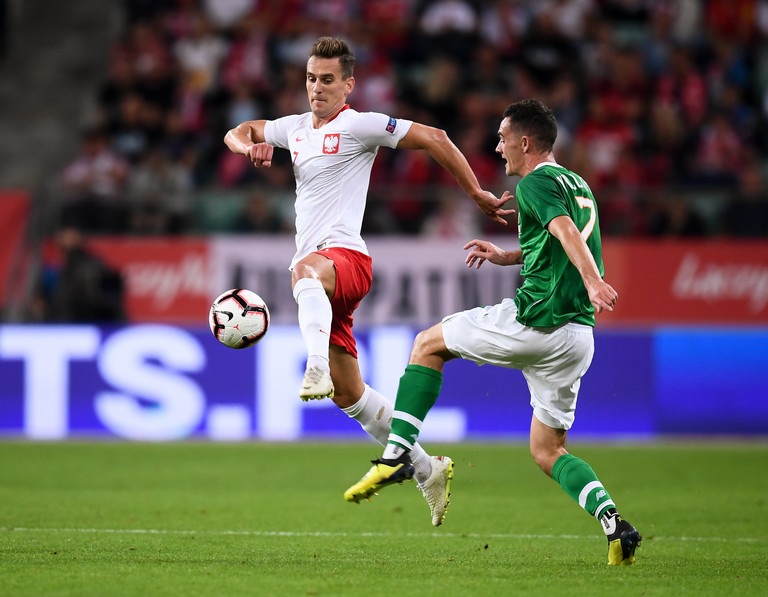 The 31-year-old was left out of squad for World Cup qualification and the Turkey friendly earlier this year. In the aftermath of that, he expressed huge disappointment at his continued omission.

I'm not going to diss any player that's in the squad, but where we are at the moment is a lot higher than a lot of people in the squad. It's confusing and disappointing in terms of thinking what you have to do to get into the squad. Obviously, age may be a factor but if form is anything to go by I don't see why I shouldn't be involved.

Based on the evidence of his last two performances, the former PFAI Young Player of the Year certainly had a case. Williams was one of Ireland's best players on the pitch and brought a much better balance to the midfield compared to the Wales game. 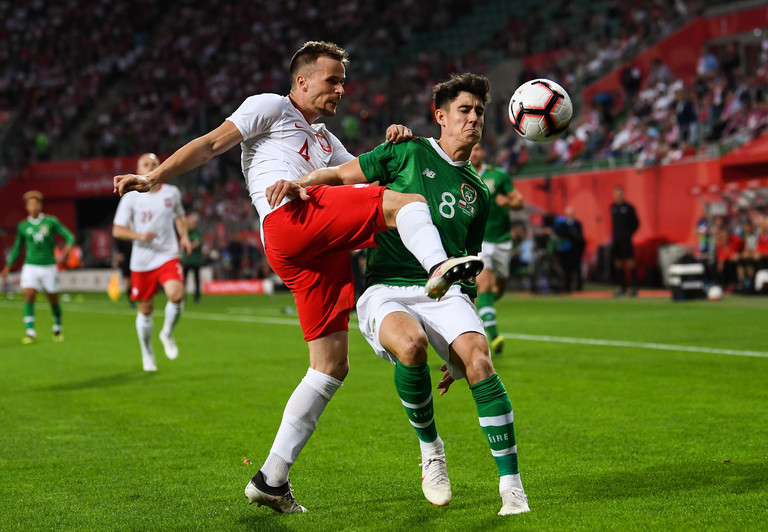 If the 2018 World Cup thought us anything, it is that set-pieces are absolutely crucial. O'Dowda's delivery seems an assist Ireland could soon capitalize on, particularly once Shane Duffy returns to the squad. Beyond that, the 23-year-old was the most exciting player going forward tonight. Keith Andrews signaled him out for his overall performance, highlighting his work rate as an underappreciated factor.

His second appearance for Martin O'Neill's side and worked hard during the opening exchanges but did not have many opportunities on the ball. Replaced by his Preston team-mate Graham Burke in the second half. 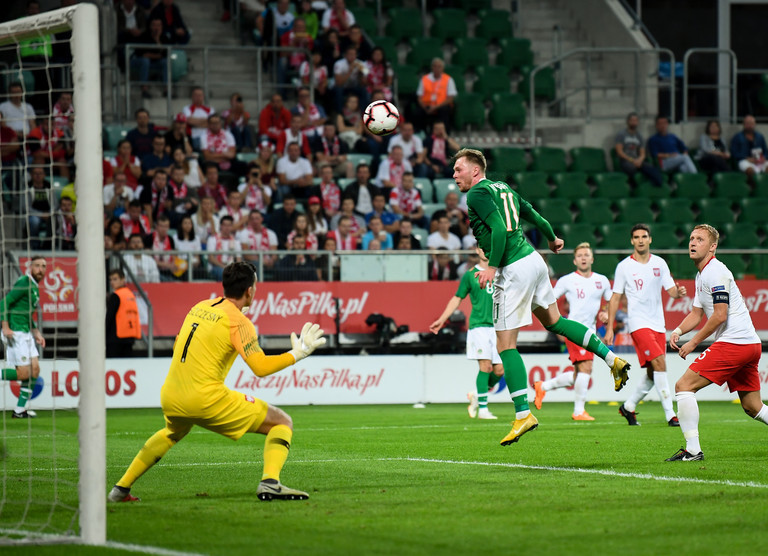 On his debut, started with promise. Relentless running and pressed high. Took his goal well and it was deserved given his strong hold-up play. The Millwall man has been grabbing goals for fun in the Championship for over a year now and could be a desperately needed goalscorer for the boys in green. Was replaced by Daryl Horgan in the final ten minutes.

David Meyler and Matt Doherty were introduced early on, Graham Burke was brought on up front and looked lively. The former Shamrock Rovers man has an admirable willingness to go looking for the ball and applies himself well without it. Conor Hourihane replaced Shaun Williams while Daryl Horgan came on for the final ten minutes, although at that stage Ireland were without the ball and trying to protect their lead. Alan Judge got a late run in place of Callum O'Dowda.

Ireland's inability to kick on when 1-0 up is frustrating but there was certainly reason to be optimistic after tonight's performance. Several young prospects, including O'Brien and O'Dowda, impressed and despite the late sucker blow the team never gave up. 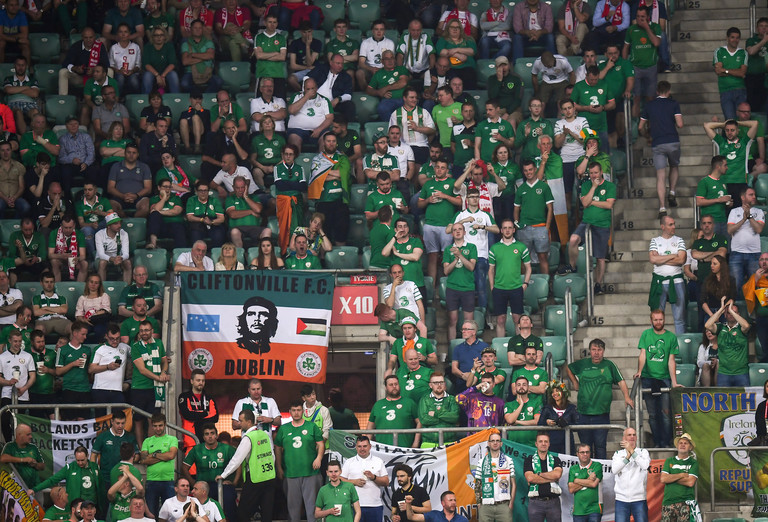 It wasn't the winning tonic Ireland needed, but it was a glimmer of hope in a week of widespread despair.

SEE ALSO: Irish Football's House Is On Fire And The Man Who Can Help Is Being Ignored

Football
1 year ago
By Gary Connaughton
In Only A Short Time, Kenny Has Made A Huge Impact On Callum O'Dowda
Football
2 years ago
By Maurice Brosnan
The New Ireland Home Jersey For 2019/20 Has Landed
Football
2 years ago
By Maurice Brosnan
Bristol Manager's Mindset Has Changed As Callum O'Dowda Saga At An End
Popular on Balls
GAA
3 days ago
By PJ Browne
Mayo's Padraig O'Hora Using Football To Promote His Real Passion
Rugby
1 day ago
By Colman Stanley
'That Pace, That Intensity, That Organisation' All Black Legend Has High Praise For Leinster
GAA
1 day ago
By PJ Browne
Jim McGuinness's Gut Tells Him Dublin Will Win The All-Ireland
The Rewind
2 days ago
By Eoin Harrington
Watch: Brilliant Dermot Morgan Dublin Segment From 'The Travel Show' Resurfaces