One Refereeing Moment Summed Up A Miserable Performance

Irish fans of a certain age have seen it all before. In 2002, journalist Paul Howard actually traveled to Lisbon for the Sunday Tribune to talk to referee Raul Nazare, a Portuguese referee who robbed Ireland blind in Belgium in a 1981 World Cup qualifier. Ireland manager Eoin Hand has admitted his called Nazare "a cheat" on the night and accused him of taking a bribe.

Either way, Ireland were robbed, and didn't qualify from a group that included Belgium, Holland, and France.

Last night, nearly 200 miles south of Lisbon, Ireland were once again the subject of a questionable referee.  In 20 years time, Howard may be on a plane to Slovenia to track down Matej Jug to ask him about one or two things. His tweets last night tell the story of the game.

Ireland doing great here. Failure to send off Ronaldo a clear example of a weak referee not wanting to influence the ‘narrative’ of the match. No one wanted to know anything about the thrown punch.

This is great stuff. But I’m worried about this ref.

Seriously, this ref is not happy with the score.

He’s reffing like a man who’s promised his nephew a Ronaldo autograph.

Slovenian referee Jug made a fool of himself during Ireland's 2-1 defeat to Portugal in Faro. When Cristiano Ronaldo scored his winner almost a minute after the allotted injury time has up, there was only one man in the ground who appeared as happy with the outcome as the record breaking striker. Smiling and giggling, the referee appeared delighted to be part of the occasion, actually apologising for issuing a yellow card when Ronaldo removed his shirt in celebration.

For Irish fans, a moment like this felt inevitable throughout the game.

You can tell early in football games when a referee is going a certain way. With home crowds back in grounds, the familiar noise of a home team who feel things aren't going their way has also returned. There was a panic and unease about the Portugeuse all night, with players and fans accusing Ireland of time wasting from the very early stages. Immediately, it was clear that Matej Jug wasn't strong enough to not go along with the mob.

Early on, Bruno Fernandes was awarded a very questionable penalty. Ronaldo threw a dig at Dara O'Shea that was completely ignored. Here we go.

Let's be honest, if this was somebody other than Ronaldo he would've gotten a red card and multiple games suspension.

Later on, Dara O'Shea was rightly booked for a transition foul, but seriously hurt himself in the process. Pepé, famously a pillar of the fair play community, was in the referee's ear about time wasting, where he would remain for the rest of the evening. With O'Shea clearly in agony, the referee showed him complete disregard and began to shoo him off the pitch. It was a contempt for an injured player we've rarely witnessed, and certainly not in the first half of a 0-0 game. 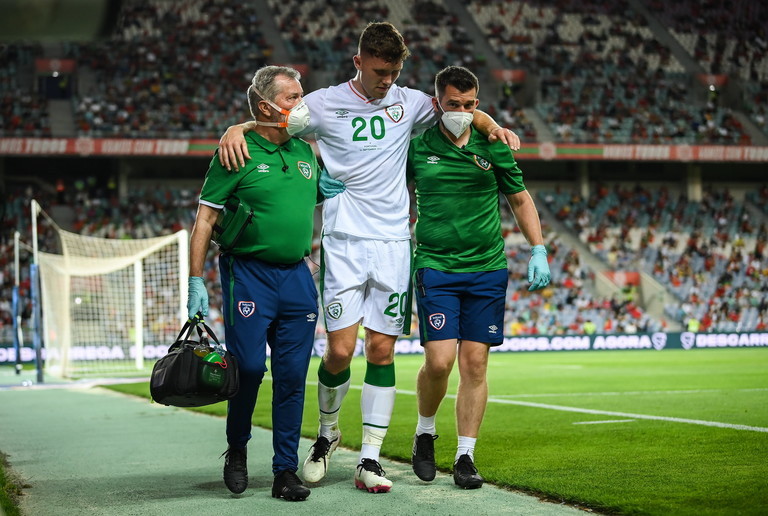 The colours were pinned to the mast by this stage. Ireland were time wasting. Going a goal ahead didn't help matters. The crowd and Portugal told the referee what was happening. He listened. Over the course of the second half, Ireland didn't seem to have a disproportionate amount of injuries. Matt Doherty went down twice, Aaron Connolly once. Both were booked by Jug.

This is extremely irregular behaviour for a referee. 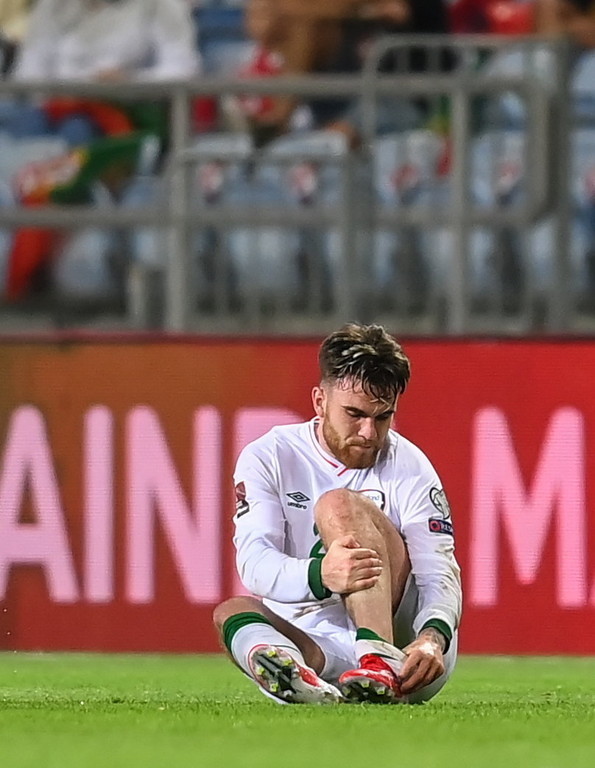 Later on, as things got desperate for Portugal, Ireland have a blatant penalty denied. VAR made the ultimate decision yes, but the referee also waved away the incident. At one point Portugal were given a corner after the Irish defender shepherded the ball over the line. Stephen Kenny referenced only two incidents his post match interview, but they could have been two of many.

After Portugal squandered a chance late on, the referee called the play back for a free kick following a ball-to-hand incident with Josh Cullen. Ireland would never fully clear their lines again before the equaliser came. At this point, Ireland were clearly exhausted after a rearguard action. Kenny had two subs ready to go, but was furious when denied the opportunity to make a change for five full minutes.

And that's not to mention an incredible amount of injury time played in both halves, including an extra minute for Portugal to score their winner.

Needless to say, Irish fans (and some others) were not pleased at all, and it was all summed up by the referee's little chuckle with Ronaldo. Proper order had been restored, and little Ireland had been put back in their place.

Incredible performance! Apologised to Ronaldo for giving him a yellow card. Determined he would be the match official when Ronaldo broke the int goal scoring record and made sure it was so. pic.twitter.com/xft0AGVTwD

The referee Tonight, awards a dodgy penalty, ignores a punch in the build up, adds 12 mins injury time & smiles like a fan girl at a One Direction concert whilst actually apologising to Ronaldo for booking him 🤮 #PORIRL pic.twitter.com/jb4QmO7Etz

Heroic performance from Ireland. Very unjust losing in that fashion and a clear homer of a referee whose added time after the added time is questionable to say the least. As is this pic @FIFAcom @FIFAWorldCup well done Ireland 👏🇮🇪 pic.twitter.com/OSzIgEymMF

Can only assume the referee was walking past behind the camera at the end of Ronaldo’s interview pic.twitter.com/dK0QPjcFRk

The referee when Ronaldo scored his second pic.twitter.com/pKcIZ5qWNk

If we were to guess, absolutely nothing. Ronaldo has broken the record, and created more miracles. He's made the headline around the world. The nuances won't matter to the international media, and they won't matter to UEFA or FIFA. Ireland are collateral damage. The good of the game depends on superstars being superstars, and if that includes helping them along a little bit, then so be it. 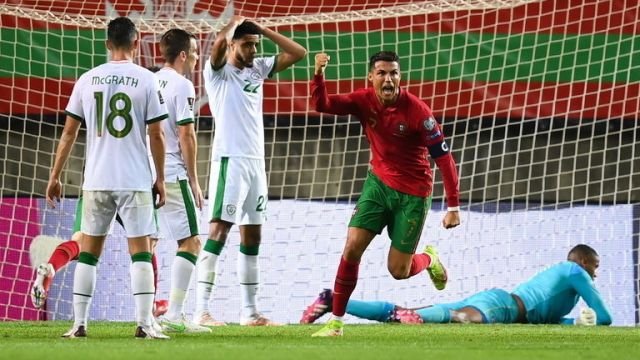