Player Ratings From A Devastating Night At The Aviva Stadium

Well, that could be that. The World Cup dream which looked so promising just a week ago is in the toilet after taking just one point from two games.

Only a win in Cardiff can even give us the dream of a playoff place at this stage, and given the results of the last week, how likely is that?

Tonight's performance was hugely improved on Saturday's terrible display in Georgia, but it wasn't enough. A 55th minute goal from Aleksander Kolarov was the difference, and while Ireland pressed the game and did everything in their power, in truth, we never even created a clear cut chance in the game, even playing against ten men for nearly half an hour.

The Ireland players worked tirelessly to a man, and none of them can be faulted on their commitment to the cause. Unfortunately, you don't get to go to World Cups for that alone.

A solid performance. He saved from Mitrovic's slightly scuffed shot in the the 32nd minute in perhaps the only moment we had our hearts in our mouth during the first half. Had tried to restart the game quickly when able too, though his options aren't always that plentiful.

Was beaten at his near post for the goal, which he won't be happy about, but it was a rocket of a shot, and it's hard to blame to the goalkeeper too much.

Worked extremely hard throughout, getting up and down the right wing with incredible regularity and speed. Chased back when needed and provided better option going forward than he did in Georgia. He linked up very well with Brady, but the final ball was lacking. Late in the game, provided the wrong option too many times, wasting valuable Ireland attacks.

It was in defence though where the real problem was for Christie. He caught out positionally for Serbia's big chance in the first half, and crucially, let his man wander off him to set up the Serbia goal. Most Serbian danger came from his side of the pitch throughout.

Was everywhere in the first 20 minutes. His goal after 9 minutes was rightly disallowed for offside, but was a measure of the danger and chaos he causes in the opposition box. Defensively, he's been a rock for Ireland from long balls and crosses, getting to everything first.

Set the tone with a big block from a long range shot after just two minutes.

Was less of  an influence as the game went on, and Ireland probably would have hoped for him to make more of an imapact from set pieces.

As usual, Clark was solid at the back. Made several vital, if understated, challenges in the first half, and basically kept Serbian danger man Mitrovic in his pocket.

Misjudged a long ball on 29 minutes that could have led to danger, but got away with it, and made a mistake early in the first half that again, was cleaned up. 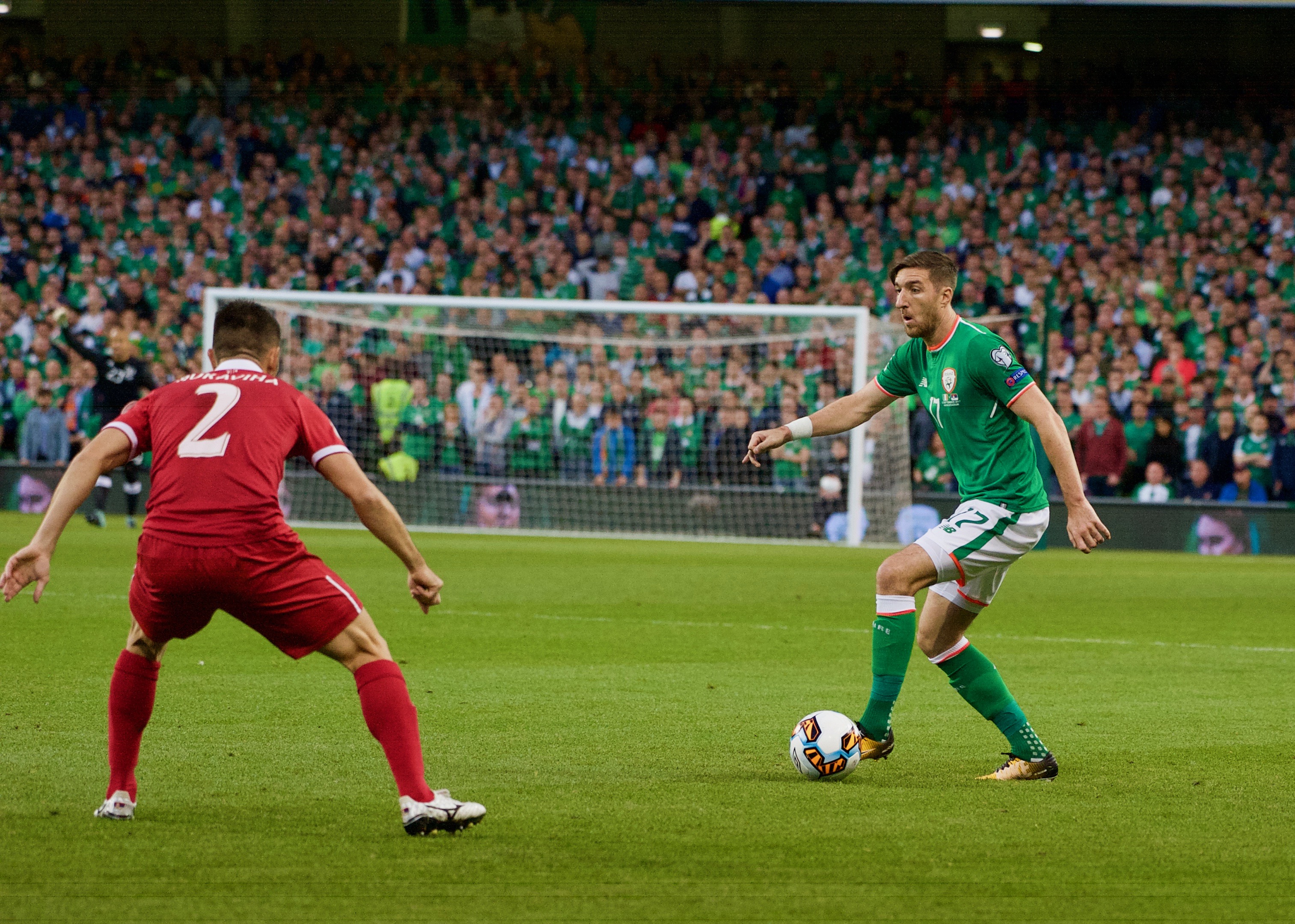 Mopped up at the back well, especially when isolated on a Serbian counter attack late in the first half. He was probably not involved enough on the attacking side of the game in the first half, though offered more in the second half.

Took a heavy knock on 52 minutes, and was taken off after 71. A solid performance.

Meyler made a shaky enough start on his return to the team, but settled in very well in the central role vacated by Glenn Whelan. He blocked, harried and tackled well, and even provided a memorable bit of skill at his own corner flag in the first half.

Importantly, he's held the middle well for Ireland, providing an option for possession and laying it off well - not something the Irish central midfield has done well in the last few years.

Was given man of the match award for his efforts. 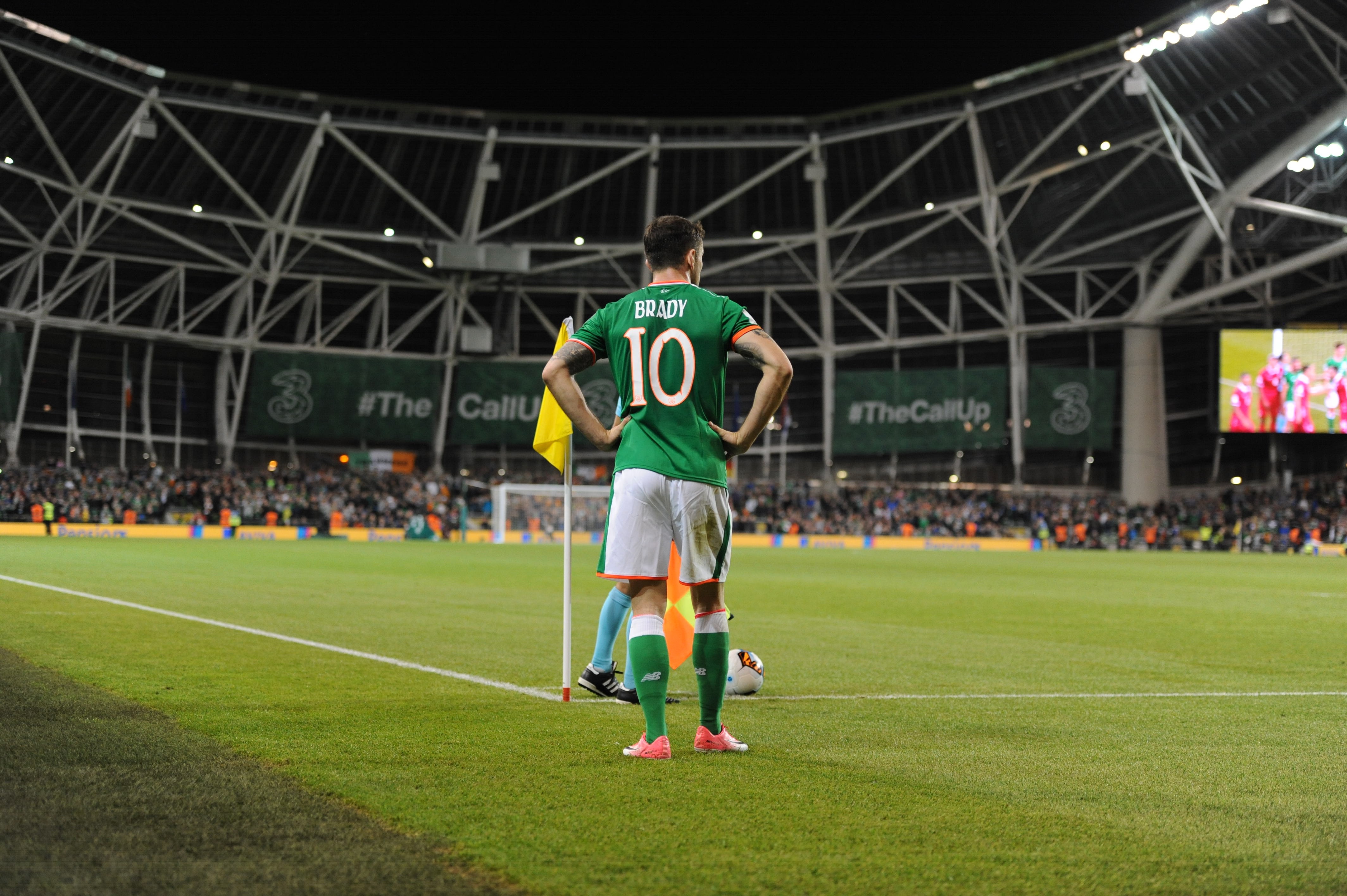 Brady got involved more and more as the game went on, linking up well on the right hand side of the pitch with Christie and Wes Hoolahan. His ball through to Hoolahan in the 35th minute was very close to putting the Norwich man through on goal.

He was Ireland's driving force when chasing the game in the second half, even from left back, where he was moved after 70 minutes.

Defensively, like the rest of the Irish team, he has tracked back brilliantly and made a lot of vital interceptions. Going forward, he provided the most spark, but there wasn't enough of it.

Picked up a silly yellow card, which means he'll miss the Moldova game next month.

The darling of Lansdowne Road was involved in everything in the first half. He linked the play brilliantly and brought others into the game. His track back for possession in the 17th minute summed up his performance, not just because of the hard work, but because of the composure shown when he won the ball, setting up an attack.

Failed to capitalise on a beautiful through ball by Brady for a rare Ireland chance and his final ball wasn't always perfect. Last just 61 minutes before being hauled off for Murphy, but it's hard to see how he doesn't fit into an Ireland team going forward given his and the team's display while he was on the field.

For work rate and desire alone, McClean again proved why he's such a popular player for Ireland. He ran everywhere and gave everything. A tackle in the 39th minute was a reward for a chase of at least 100 yards to stop a Serbian counter attack.

With the ball, McClean again tried and tried, but often made the wrong decision, especially shooting from too far out too often. He picked up a yellow for persistent fouling in the 73rd minute, meaning he too will miss the Moldova game, and got involved in a spat with Branislav Ivanovic which was needless and took up too much time with Ireland 1-0 down. 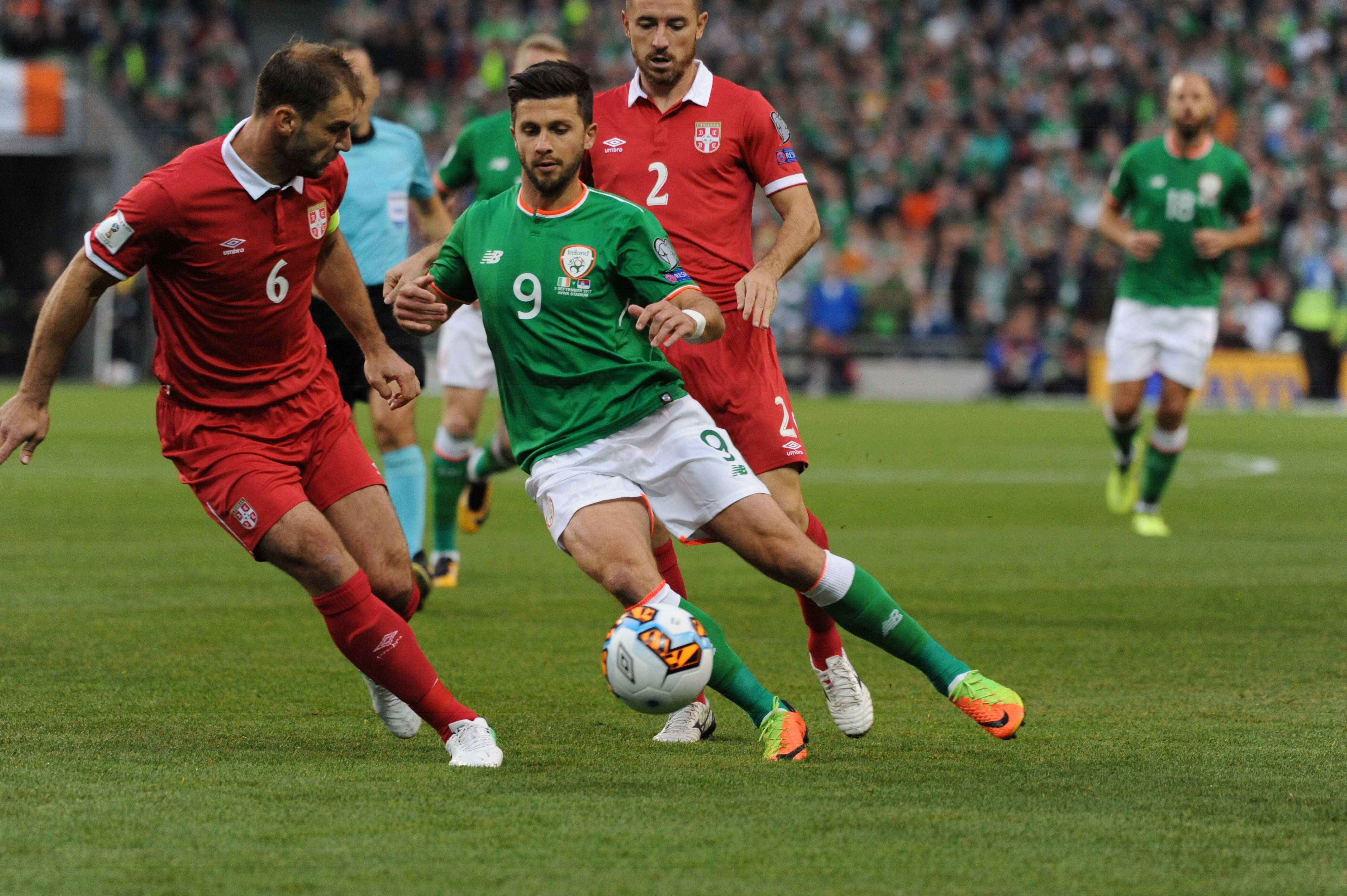 Worked his arse off tonight, and won a number of the balls on the left for Ireland. Was involved in an ongoing battle with the referee and the Serbian back four, and will wake up sore tomorrow.

Spent a lot of the game chasing lost causes as usual, but unfortunately just never got his one chance in front of goal that could have been the difference between a frustrating night and a "Germany".

Struggled to impose himself on the game. When he got involved on the ground, he generally used the ball well, and made a number of clever runs across the line throughout, most of which weren't picked out. In the air, he struggled, especially when tired late in the game, giving away a number of free kicks that slowed the game down, and cost Ireland momentum when chasing the game.

Daryl Murphy, Callum O'Dowda and and Conor Hourinhane were used from the bench for Ireland. Murphy made a general nuisance of himself, and could have been in on goal if not for Maksimovic's cynical foul that got him sent off.

He could have been fouled a few minutes later for a penalty, after some great work on the left hand side from O'Dowda, but unfortunately, the referee had already given his one decision against Serbia tonight.

Football
2 months ago
By Maurice Brosnan
Balls Remembers - The French Meltdown At World Cup 2010
Football
1 year ago
By John Dodge
All 30 Men Who Have Played In The League Of Ireland And Gone To The World Cup
Football
2 years ago
By Maurice Brosnan
Chelsea, Man City and Man United Players In Breach Of Contract After World Cup Return
Popular on Balls
The Rewind
7 hours ago
By Gary Connaughton
The New Friends 'Reunion' Sounds Like It Will Be A Painful Watch
Football
23 hours ago
By Fiachra Gallagher
This Interview From 2001 With Roddy Collins And Stephen Kenny Is So Awkward
Football
19 hours ago
By Gary Connaughton
Roy Keane Questions Henderson & Fred Quality After Liverpool Loss