Ireland take on Switzerland in a massive Euro 2020 qualifier on Thursday night and you feel it is a game Mick McCarthy's side will need to secure a positive result from. That will be no easy task.

The Swiss currently sit in 11th place in the FIFA World Rankings, a full 21 spots ahead of the Irish. They reached the UEFA Nations League tournament this past summer, and were unlucky to lose out to Portugal in the semi-finals thanks to a pair of late goals. They picked up 27 points from a possible 30 in qualifying for the 2018 World Cup.

In other words, they are a damn good team. But they're not unbeatable.

Northern Ireland ran them close in the play-offs for the 2018 World Cup, losing out 1-0 over two legs. That will offer encouragement to Ireland, but one match in particular will no doubt have caught Mick McCarthy's eye.

Switzerland took on Denmark earlier in the Euro 2020 qualifying campaign, a meeting of what many people to consider to be the best two teams in the group. To call it a strange game would be underselling it.

It would finish 3-3, an eye-catching scoreline in any circumstance. However, what makes this one so remarkable is that the Swiss had a 3-0 lead after 83 minutes.

What followed was one of the most remarkable collapses in recent memory. They crumbled under the pressure of the Danish attack, but this had more to do with their own frailties than any outstanding play from the Danes.

The manner of their collapse is interesting to consider. Simply put, Ireland are perfectly constructed to exploit the weaknesses exposed by Denmark on that occasion. 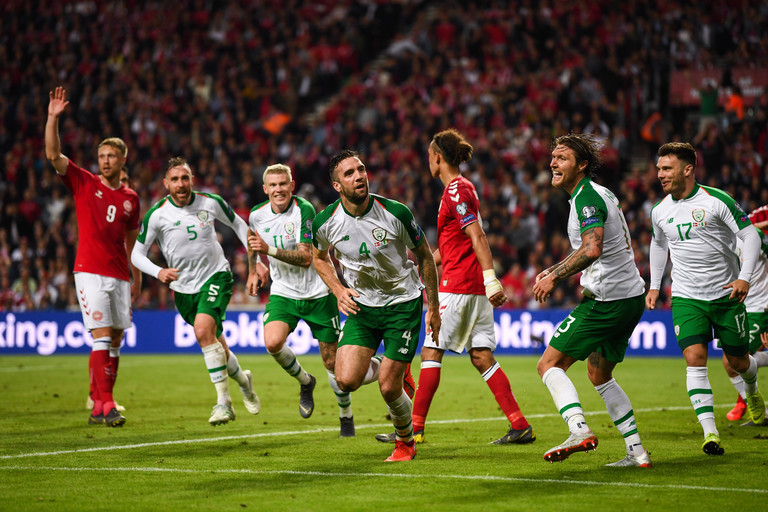 In terms of the Swiss attack in that game, we should expect to see something similar against Ireland. Xherdan Shaqiri, the mercurial winger on whom they depend so heavily, missed that game. He will also miss the fixture at the Aviva Stadium on Thursday night.

His absence limits what Switzerland can do going forward, and their offensive game plan seemed to go back to basics for the Denmark game.

Their attack was based largely around crosses. Most of the scoring opportunities in that game came from balls whipped in from out wide. Not only that, but they seemed to put an emphasis on winning the second ball.

Take a look at Freuler's opener. A driven cross from Ricardo Rodriguez was laid off by Ajeti, and when the Danish defence failed to react quick enough, Freuler was on hand to finish well.

Switzerland get the opener!

Freuler smashes it into the net from close range 💥#SUIDEN #Euro2020 #VMSport pic.twitter.com/mfToFfDFsA

Their second was a an absolute worldie from Granit Xhaka, and for those of us who have watched him in the Premier League over the past few years, you wouldn't expect to be a regular source of goals for this team.

Their third goal was largely similar to the first. This time it was from a corner where Aknji's knock down was steered towards goal by Breel Embolo. Again, the second ball was key.

Switzerland get a 3rd and it's an own goal!

For all of Ireland's limitations, there is one area where you would expect them to cope well defensively. That is long balls into the penalty area, where Shane Duffy and Richard Keogh are both expertly equipped to clear their lines at the first time of asking.

It is rare we see Ireland allow second balls to drop into the penalty area, and cutting off this avenue will be vital in stifling the Swiss.

If Ireland, and especially Shane Duffy, are capable of defending high balls into the box, they are equally adept at attacking them in the opposition penalty area. That brings us nicely onto the glaring weakness in the Switzerland defence that was exposed by Denmark.

Simply put, when the pressure came on Switzerland were unable to deal with crosses into the penalty area.

Denmark's first came in the 84th minute, and it was from a free kick crossed into the box. Christian Eriksen is capable of whipping some magnificent balls into the penalty area, and while this one was put into a good area, it lacked pace.

Switzerland then completely failed to do deal with it, before Jorgensen steered it home at the far post. Keep an eye out for the complete disinterest shown by Swiss number five Manuel Akanji in attacking the ball here.

(The Denmark goal will play automatically when you click on the video below.) 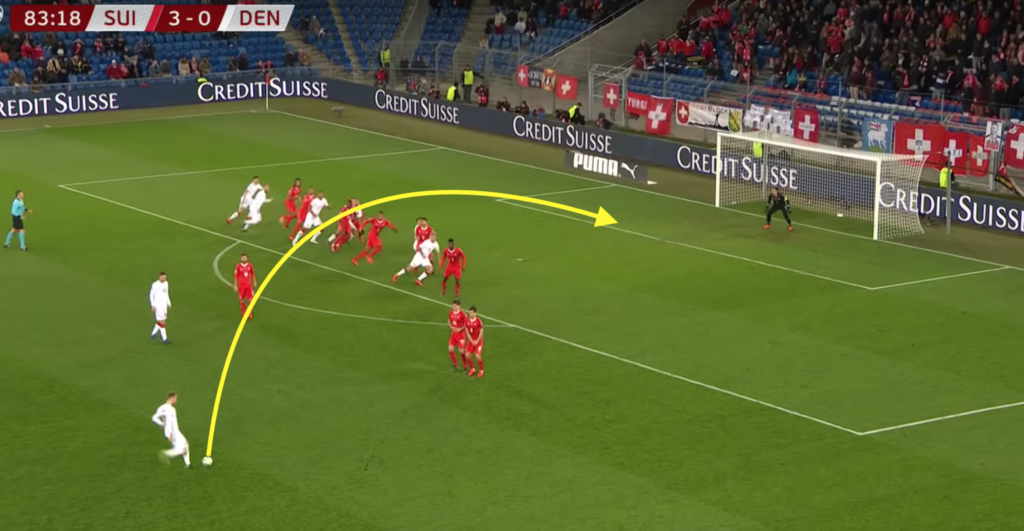 You won't get away with that when Shane Duffy is knocking about.

When the pressure inevitably followed from Denamark, the home side completely lost their heads.

While the second goal did not come from a high ball into the penalty area, it was an incredibly piece of poor defending that allowed them in. Kevin Mbabu completely switched off at right wing back, playing two Denmark players onside.

Denmark get a second back!

Look at that for a defensive line. 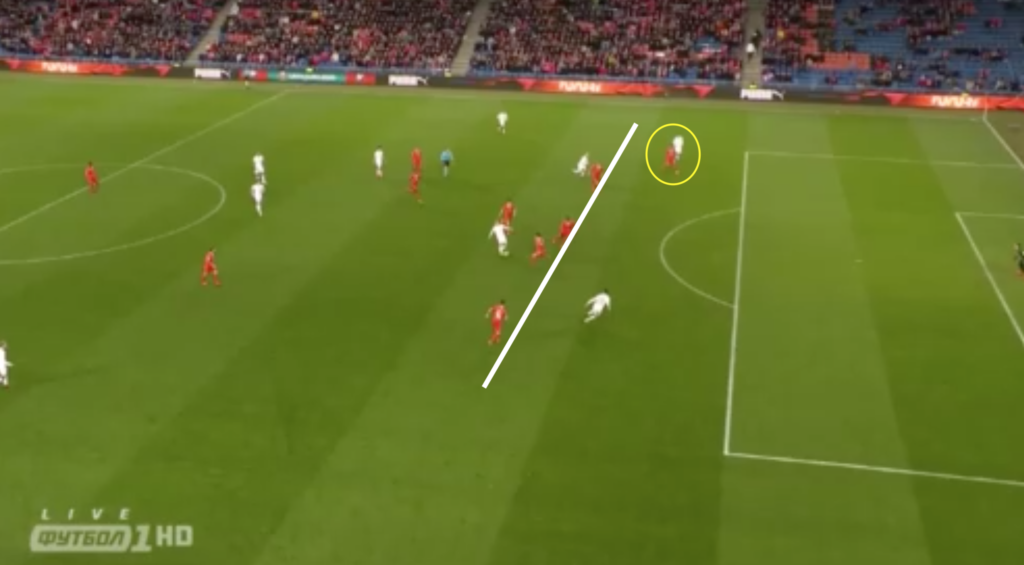 You could certainly imagine the likes of Callum Robinson or Enda Stevens capitalising on such a mistake were it to occur again.

Denmark's third will have Mick McCarthy licking his lips.

Deep into injury time, the pressure was well and truly on the Swiss. After a long ball was pumped into their penalty area from the Danish half, they completely failed to deal with it.

They had no less than FIVE opportunities to clear the ball, before Dalsgaard managed to nod it home.

DENMARK HAVE DONE IT! 🇩🇰

There were a number of different defensive errors here, but all were linked to their inability to clear the ball at the first time of asking. Just as their attack is predicated on winning second balls, their defence is equally incapable of snuffing them out at the other end.

All of that leads us to Ireland, a team who score almost exclusively from crosses into the box. Think of all Ireland's most iconic goals in recent years: Hoolahan against Sweden, Brady against Italy, McClean against Wales, Duffy against Denmark.

What do they all have in common? They all featured crosses into the penalty area. Some of them were low crosses, but Switzerland struggled with them as well.

Denmark's opener against the Swiss was remarkably similar to a goal that was scored against them a few months back.

And it ends 1-1 between Denmark and Ireland; Shane Duffy with a crucial towering header to bring Ireland level. #denirl #rtesoccer
pic.twitter.com/C1gRtXPJfE

As always seems to be the case, Shane Duffy will be as important to Ireland's attack as he is to their defence in this game. He is phenomenal in the air and will trouble the visitors. The likes of Richard Keogh and David McGoldrick will also fancy their chances.

The Irish seem similarly equipped to deal with their attacking output.

It is the one area where Ireland hold an advantage. They need to make the most of it. While Mick McCarthy has tried to play the ball out from the back in the opening four fixtures, it should not come as a surprise to see the team go direct more often on Thursday night.

We could be accused of grasping at straws here, but this is a genuine avenue for Ireland to explore. It is certainly something to keep an eye out for.