County-By-County: The Breakdown Of Where Our International Players Come From

In the past few years, the FAI have made a concerted effort to tap into the wealth of footballing talent that exists around the island of Ireland. The 'FAI Player Development Plan' was published in 2015 with the stated goal of producing elite players from every part of the country, introducing National Development Leagues so top prospects could compete with and against each other on a consistent basis.

Youth football in Ireland had previously centred around Dublin, with the Dublin District Schoolboy League the crown jewel of youth leagues. Talented young players would flock to the capital in order to maximise their potential, with this being seen as the only semi-reliable route to a professional career.

Prior to this, there had been no national youth league in Ireland. The best players from outside Dublin could play in their local area, but their development often stagnated due to a lack of top level coaching and competition.

Considering this, it is not surprising that Dublin natives made up lion's share of our international squads in the past.

However, with the National Development Leagues now offering a genuine path to underage international squads, and eventually first team football at senior level, how has that affected the makeup of the current teams at various age levels?

We have looked at the origins of players in five current international squads, from senior down to U15 level. It paints a very interesting picture.

These players are not only categorised by where they were born, but where they are from and lived most of their lives. It is also worth noting that we are not questioning the 'Irishness' of any players born outside this country.

We broke the players down county-by-county, as well as those who were born in England or other countries. There certainly seems to be a trend developing.

(The players included are based on the most recent squads named at each level.) 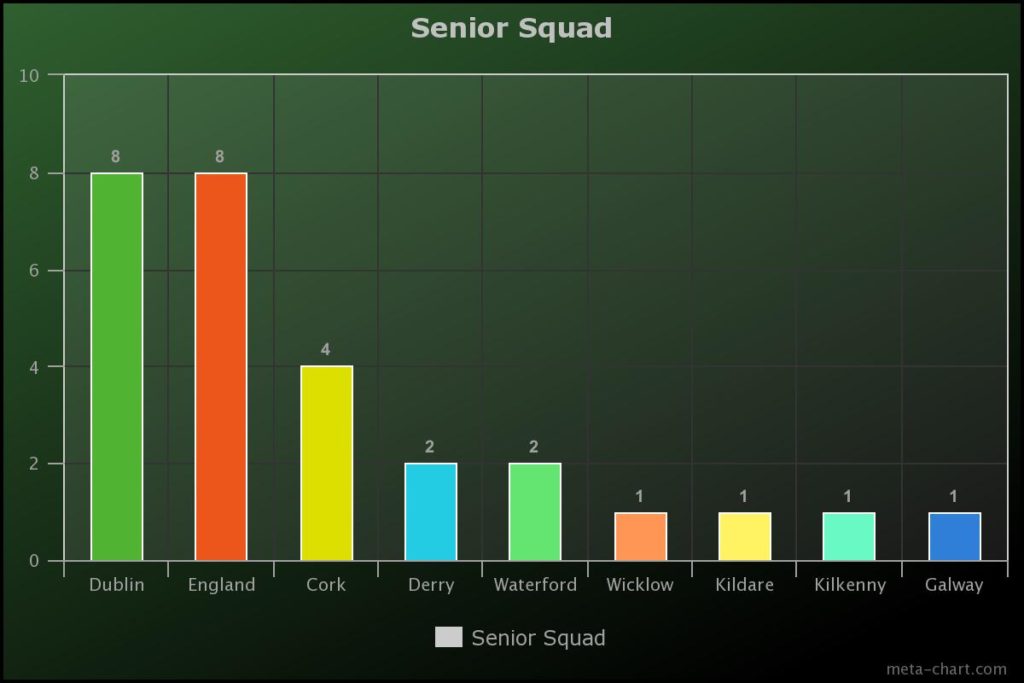 There are a surprising number of English-born players in the senior squad, although most of these would not be considered first choice. David McGoldrick was the only one to start against Denmark. Callum O'Dowda, and Scott Hogan were not even part of the matchday squad.

Dublin still dominates amongst the Irish counties, with the likes of Jeff Hendrick, Matt Doherty, and Troy Parrott hailing from the capital.

John Egan, Alan Browne and co. have contributed to a Cork renaissance. Darren Randolph, Mark Travers, Sean Maguire, and Aaron Connolly were the only representatives from their county.

Seamus Coleman would have ensured Donegal's inclusion if not for his suspension. 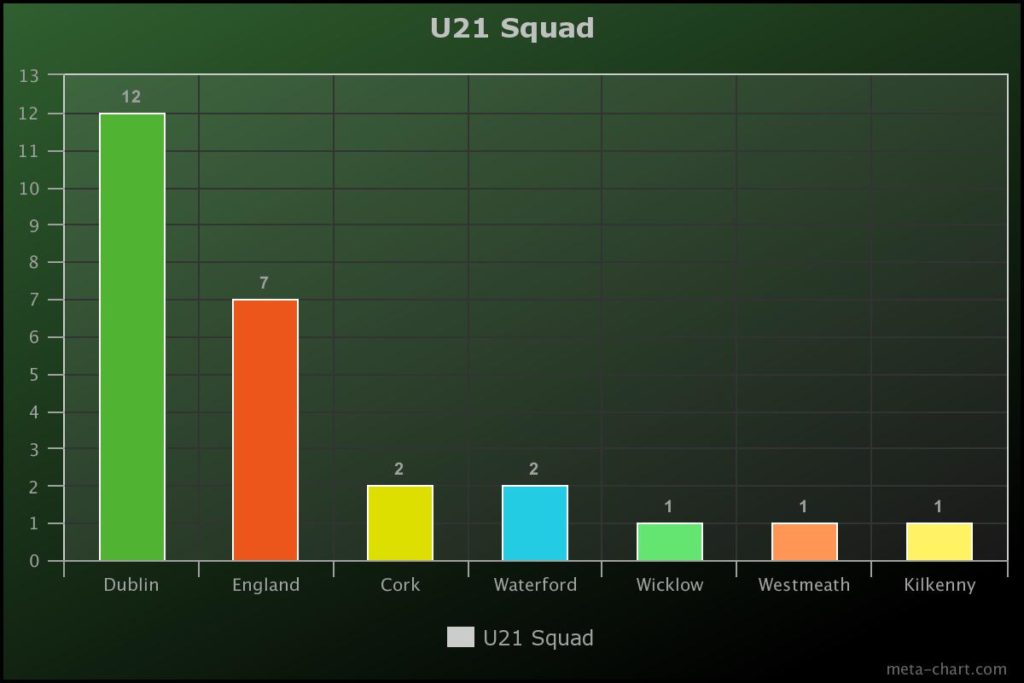 Stephen Kenny recently preached about the diversity within his U21 squad, but it is still largely based around players born in Dublin and England.

Some key members of the team hail from Munster, with Caoimhin Kelleher and Adam Idah from Cork, while Lee O'Connor and Jayson Molumby came through the ranks at Waterford.

Aidan Keena is the only Westmeath man to be part of any of the five squads. 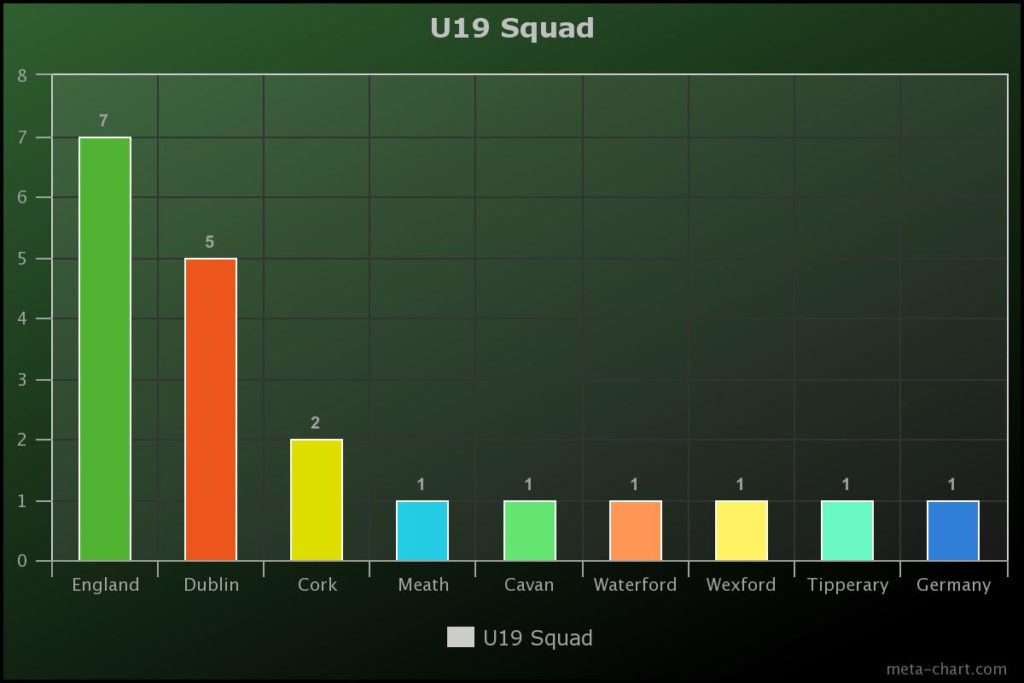 The U19 squad is the only one in which English-born players are the most well represented group. There are also a number of players from elite English clubs, with Arsenal, Manchester City, and Spurs present.

There are two youngsters who ply their trade outside Ireland or England, with Dublin native Armstrong Okoflex at Celtic and German-born Conor Noss a part of the Borussia Monchengladbach setup. 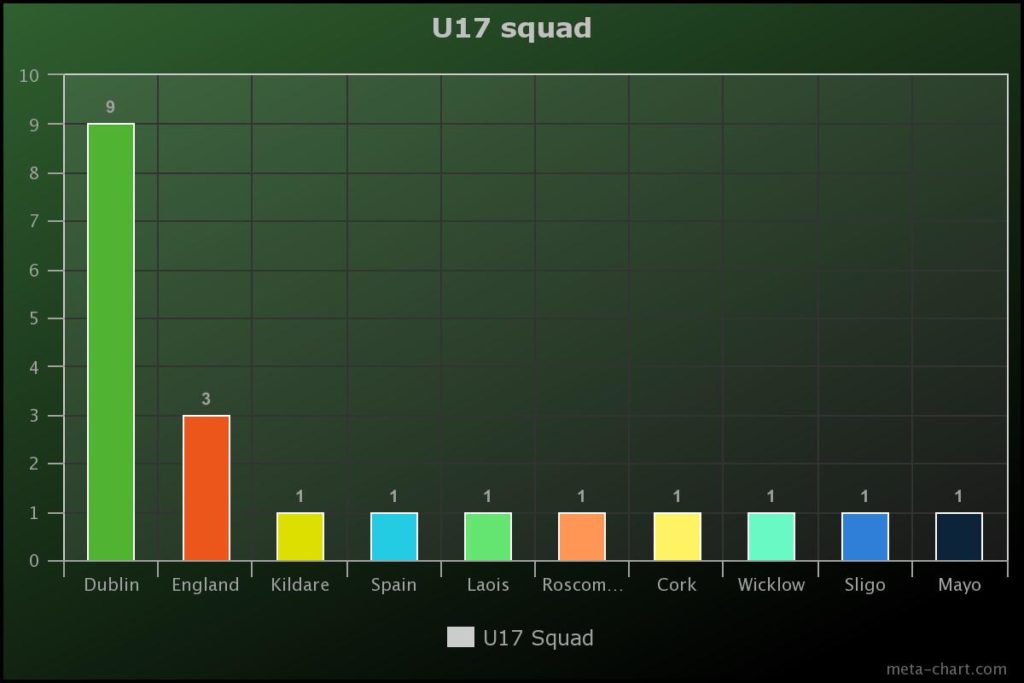 Is the makeup of the U17 squad an indication of the impact of the National Development Plan? While Dublin is dominant, there are fewer English born players and a good spread from around the rest of Ireland.

Seven other counties having a player included, as well as the Spanish born Anselmo Garcia McNulty. Garcia McNulty, who's mother hails from Clare, came through the Real Betis academy before joining Wolfsburg last summer. 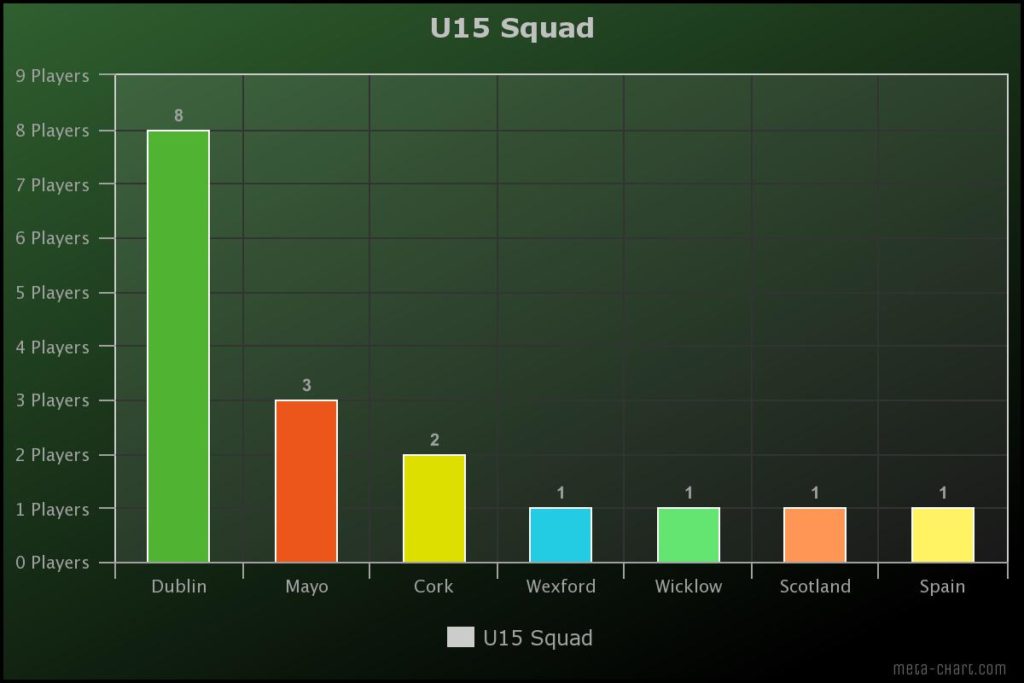 Dublin dominate the U15 squad , but it is notable that no English-born players make the cut. Mayo are also suddenly an important contributor, with three players in this team compared in one in all of the others combined.

Caden McLaughlin of Malaga was born in Spain, while Rocco Vata was born in Scotland and plays for Celtic. Vata is the son of former Albania and Celtic star Rudi Vata, qualifying through his Irish mother.

It seems that while the new strategy set forward by the FAI seems to be making an impact, Dublin still produces more players than any other county. It is also worth mentioning that the younger teams tend to have less players born outside of Ireland, and those numbers will likely rise as they progress through the age groups.

In all 17 counties are represented, while our players have been born in four countries apart from Ireland.

Still, it seems we are producing more of our own players than in previous eras. That is certainly something to be encouraged by.

SEE ALSO: The Irish Team We Want To See Starting The Euro 2024 Final

Football
1 day ago
By Gary Connaughton
In Stephen Kenny, Ireland Finally Have A Manager Who Believes In His Players
3

Football
2 days ago
By Gary Connaughton
The Squad From The Infamous US Tour Of 2007: Where Are They Now?
Previous Next

Football
1 day ago
By Gary Connaughton
In Stephen Kenny, Ireland Finally Have A Manager Who Believes In His Players
Football
1 day ago
By Balls Team
James McClean Understands Why 'Light-Hearted Joke Didn't Go Down Well'
Football
2 days ago
By Gary Connaughton
The Squad From The Infamous US Tour Of 2007: Where Are They Now?
Popular on Balls
The News
38 minutes ago
By Donny Mahoney
Landlords Doing Their Bit For Tenants In This Crisis, Says Auctioneer
1

GAA
1 hour ago
By PJ Browne
Quiz: Name Every All-Ireland Club Football Championship Winner
GAA
2 hours ago
By Balls Team
'I Got A Phone Call. I Wasn't In The Form To Talk To Nobody. It Was Actually Cluxton'