The Exciting Ireland Team We Want To See Start Against Bulgaria

After a lengthy absence, we are less than a week away from the return of international football.

Ireland travel to take on Bulgaria on September 3rd, before hosting Finland three days later. Those games offer the added excitement of ushering in the start of the Stephen Kenny era.

The new Ireland manager has named his squad for both games, featuring some exciting new names. Who will be part of Kenny's first starting XI?

We are likely to see a blend of youth and experience in Bulgaria next week. Using the former Dundalk manager's favoured formation of 4-3-3, here's the Ireland team we would love to see take to the pitch in Sofia.

Despite some very promising up and coming Irish goalkeepers on the scene at the minute, it looks almost certain that Darren Randolph will retain his spot as number for a while yet.

Gavin Bazunu and Caoimhin Kelleher are both highly promising but lack first team experience. Mark Travers looks set to be first choice at Bournemouth this season, but Randolph still has quite a head start on him despite the Wicklow man's status as a backup at West Ham.

Despite losing his place at club level, he has always been brilliant for Ireland.

Possibly the biggest selection headache facing Stephen Kenny ahead of his first game in charge. The Seamus Coleman versus Matt Doherty debate has been raging on for the best part of two years now, with it often coming down to a question of club form against international experience.

To Doherty's credit, it looks almost impossible to leave him out of the team at this point. He had another phenomenal season in the Premier League last term.

He didn't get a start at right back under Mick McCarthy until the last game of the campaign, standing out as perhaps Ireland's best player in the home draw with Denmark.

Stephen Kenny will demand more going forward from his fullbacks, something the former Bohemians player can certainly provide. If this isn't the perfect opportunity to get him into the side, it will probably never come. 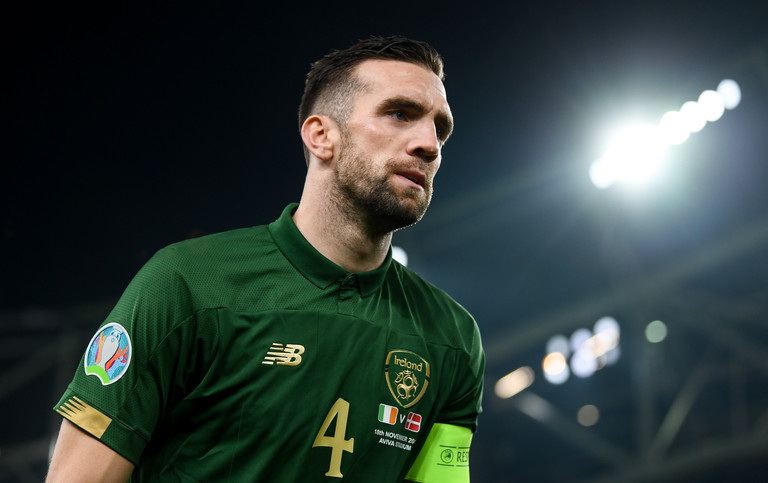 Currently in the midst of seeking a move away from Brighton after falling down the pecking order, there are no such doubts over Shane Duffy's international future.

He remains an automatic starter when fit, a status he has very much earned over the last few years. While he has not played with John Egan all that much, those two have the potential to form a formidable partnership at the back.

If Doherty does get the nod ahead of Seamus Coleman, Duffy is likely to take the captain's armband.

John Egan will be a key player under Stephen Kenny. Looking at his performances for club and country over the last 12 months, it is beggars belief that he was not in the Ireland team years ago.

At 27-years old, he will finally be given that opportunity. During his introductory press conference as Ireland boss, Kenny labelled Egan's breakthrough as having the potential to 'change everything' in the way Ireland play.

That's how highly he is rated.

Another man kept out of the Ireland side for far too long, Stevens has been making up for lost time. He started all but one of the Euro 2020 qualifiers up to this point (missing the trip to Georgia due to suspension) and his performances have improved as the campaign went on.

The draw against Denmark was his finest game in a green jersey, something he will be looking to capitalise on in the coming weeks.

It seems he has even had a few words with his new manager ahead of the international break.

Stephen Kenny was having a quiet socially distanced word with his left back Enda Stevens at Dalymount Park last night 👀🇮🇪 pic.twitter.com/IBTZaJswY1

He's back! Having not made an international appearance since September 2016, James McCarthy has returned to the international fold.

He turned down Mick McCarthy's advances last season in order to focus on getting back to full fitness. That decision paid off, with the midfielder making 33 Premier League appearances for Crystal Palace.

If he can bring that from to international level, there is no doubt that he can be a key player for Ireland. It's also easy to forget that McCarthy is still only 29-years old.

It's a move that is long overdue, but Jayson Molumby's first inclusion in the senior squad is a massive boost for Ireland.

He consistently stood out as the best player on the pitch during his time under Stephen Kenny at U21 level. The 21-year old offers many of the qualities that have so often been lacking from the Ireland midfield, meaning there is no reason to avoid putting him straight into the team. 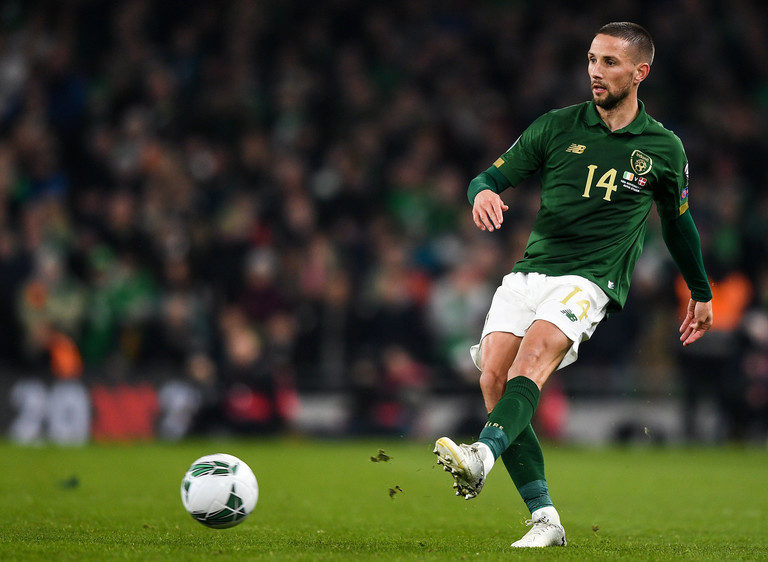 It is a tossup between Conor Hourihane and Jeff Hendrick for the final midfield spot, but we are giving the Aston Villa man the nod after his stellar form towards the end of last season. The fact that Hendrick hasn't played a competitive match since March is also likely to count against him.

Hourihane also brings the added benefit of top class set-piece delivery, something that Ireland have often depended on in the past. While Kenny will be looking to making his team much more potent in open play, it is always an added bonus to have quality deliveries from dead ball situations.

A trio of McCarthy, Molumby, and Hourihane should have little trouble in retaining possession in the middle third.

Ireland don't really have a natural right winger in the squad. Robbie Brady, James McClean, and Callum O'Dowda have played there on occasion, but all are more comfortable on the left.

We would like to see Callum Robinson be given another opportunity. He struggled in this position under Mick McCarthy, but as we discussed before, wingers will be asked to perform a very different role under Stephen Kenny.

The freedom to roam inside and not being required to swing in a high volume of crosses should suit the Sheffield United man. He certainly has more to offer Ireland than we have seen up to this point. 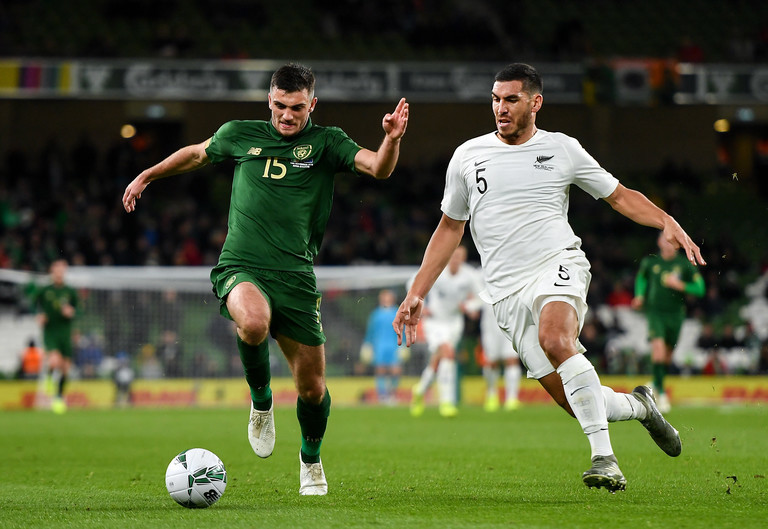 David McGoldrick will miss the Bulgaria game, and with everyone well aware of what you get from Shane Long, this is the perfect opportunity to play one of the youngsters in the squad.

You can take your pick from Troy Parrott or Adam Idah, but we are going with the Spurs man. Stephen Kenny has already said that Parrott is the player in the squad that possesses many of the same traits as David McGoldrick, with the former Dundalk boss already proving that he can get the best out of the 18-year old.

His senior debut against New Zealand showed he would not be phased by leading the line for Ireland. If circumstances allowed, we would also love to see Idah be given at least half an hour off the bench.

You can't leave Aaron Connolly out of the Ireland team based on current form. He was excellent for Brighton over the closing stages of the season.

While Michael Obafemi missed out on the squad partly due to his lack of experience playing on the wing, Connolly has already proven on numerous occasions that he can thrive in that position.

A front three of Connolly, Parrot, and Robinson offers versatility, pace, high levels of work-rate, as well as the ability to both drop off and run in behind. 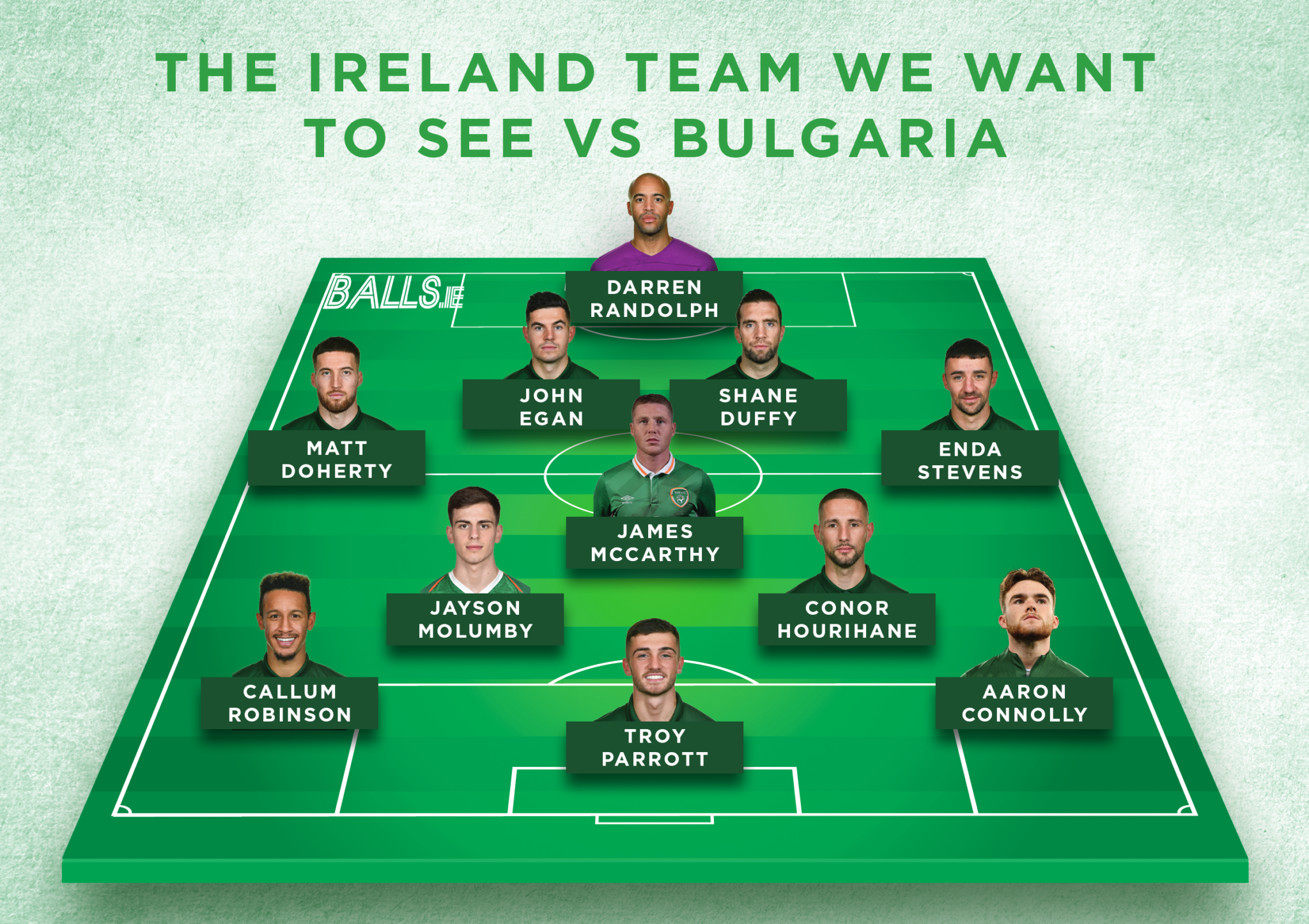 There you have it. This team offers plenty of experience, but also introduces the type of young, exciting players that Ireland supporters have been crying out for.

The defence offers both solidity and attacking ability, while the same can be said of the midfield. Up front, it would be the most exciting trio we have seen in Ireland side for some time.