Stephen Kenny's first match as Ireland manager came against Bulgaria in Sofia on the third of September. It was a tense 1-1 draw that Ireland dominated in terms of possession despite struggling to create scoring opportunities. It was the first time we saw James McCarthy play in an Ireland shirt in four years, as he played beside Jeff Hendrick and Conor Hourihane in a brand-new Irish midfield. It was also the match that provided us with our first glimpse of Stephen Kenny's 4-3-3 formation in action.

What will Stephen Kenny have taken from the game? We had data analyst Dominic Corrigan crunch the numbers for the match, with a special focus on Possession Value Added. Possession Value is a popular metric for gauging a player's performance. Essentially, PVA measures the increase or decrease in the likelihood of a possession ending in a goal based on the successful passes a team makes. This is a really important metric for Stephen Kenny as he looks to instil a playing philosophy that values possession, and hopefully leads to more goals.

First let's analyse the game flow from a PVA perspective. 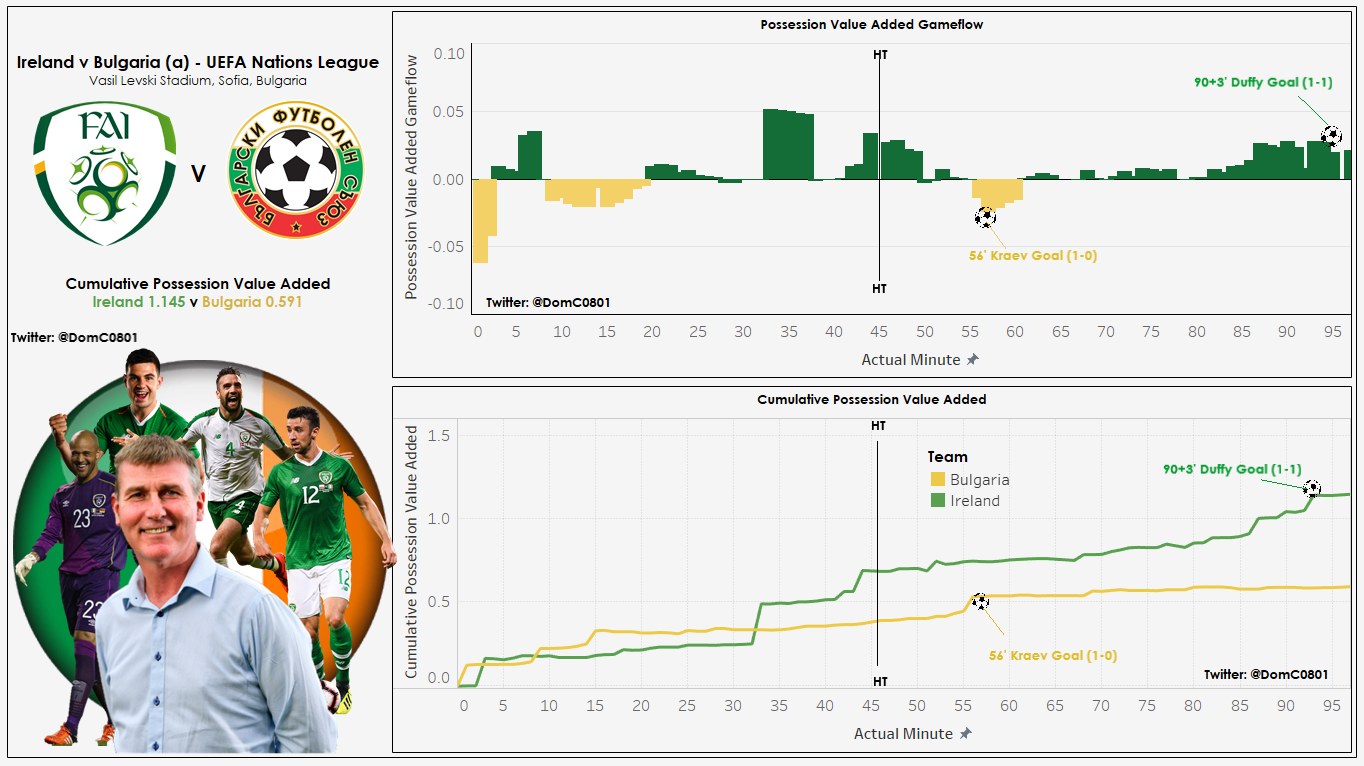 Overall Ireland were the far better team in terms of possession, and dominated the ball throughout.

In fact, we can get a sense of how relatively poor both teams were here. Bulgaria played very much within themselves, rarely threatening or creating chances. Ireland built their attack steadily throughout the match before snatching the late goal. Overall Ireland had a cumulative PVA of 1.145 while Bulgaria only had 0.591.

Now let's look at the individual performances in terms of PVA. 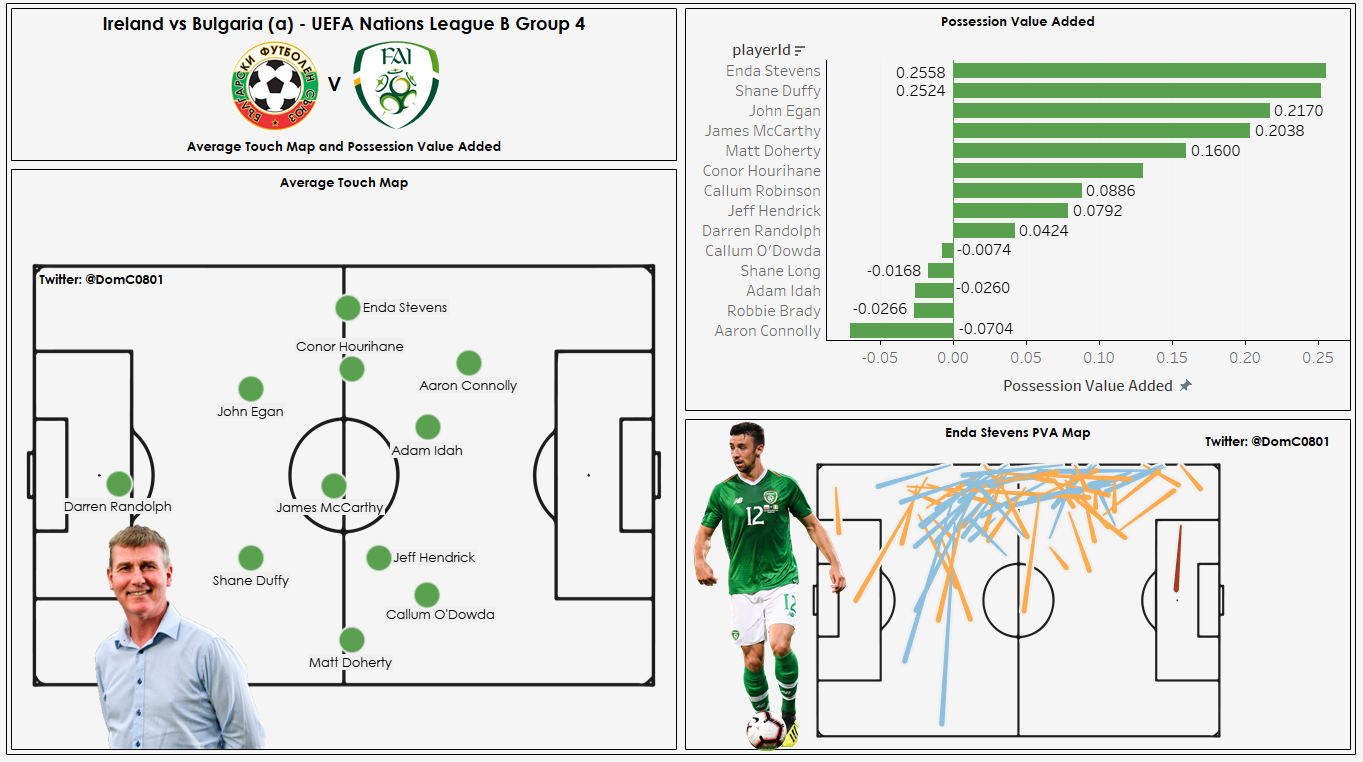 From the average touch maps we can see that, against Bulgaria, Ireland had a strong right-sided bias in attack, with Jeff Hendrick and Matt Doherty pushing up the pitch to support Callum O’Dowda.

It's also worth noting how high up both Duffy and Egan positioned themselves. This is likely an Irish record for two centrebacks.

Matt Doherty's role should be scrutinised as well, as he started in place of Ireland captain Seamus Coleman. Doherty is one of the most dangerous wingbacks in the Premier League but the graph below shows that he was not a major factor in creating scoring opportunities for Ireland against Bulgaria. 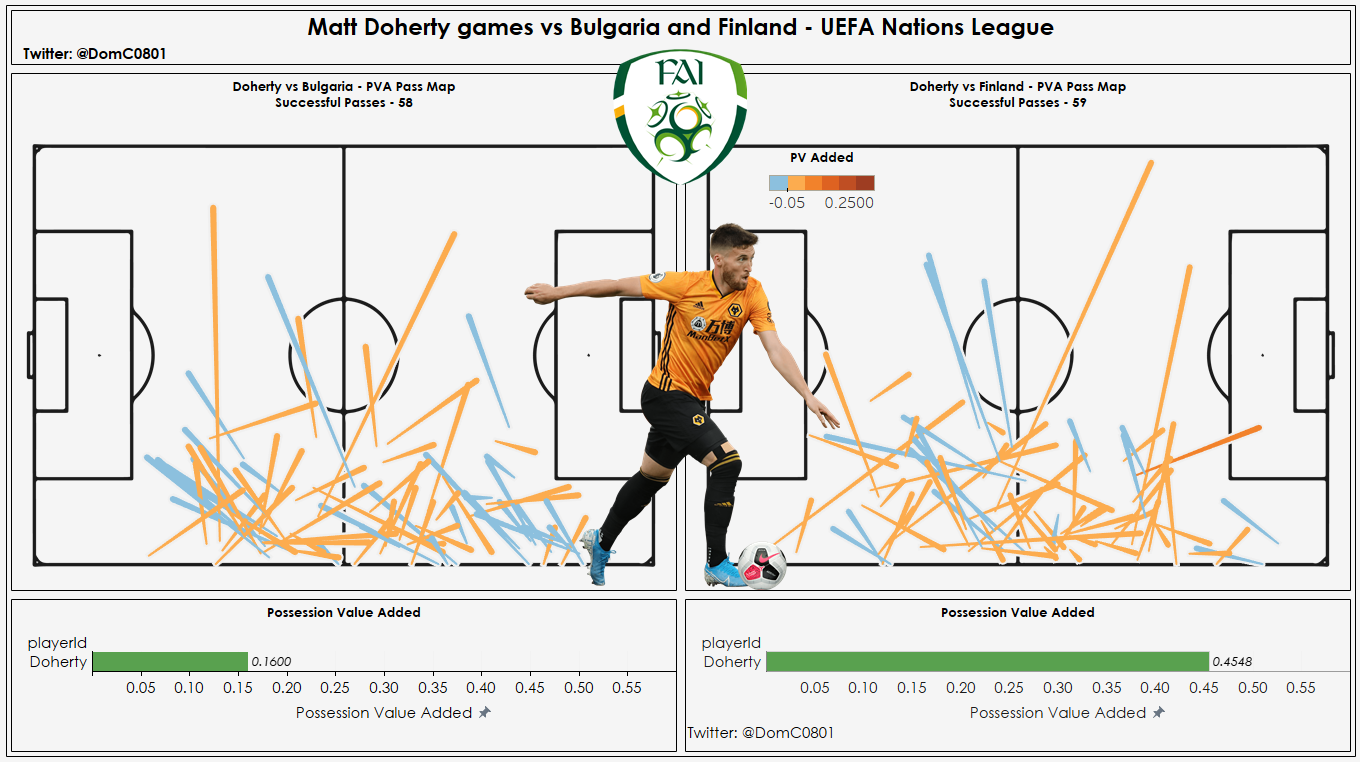 Football
1 day ago
By Gary Connaughton
Quiz: Name The Top International Goalscorer From These 50 Nations
7

Football
1 day ago
By Gary Connaughton
Is Patrick Bamford Ever Going To Play For Ireland?
Previous Next