30 years ago today, Ireland finally played in a World Cup game. Almost two years to the day after we made our European Championships debut, the opponents were once again England. Surely, we couldn't repeat the magic. We've dug up the old Balls.ie archive* to find the player ratings from the 11th June 1990.

*Not a real archive

The moment Irish football people have waited a lifetime for finally arrived tonight. After years of hurt, ineptitude, bad luck, and bad refereeing, Ireland had finally played at the biggest stage of all. A cold, windy and, eventually, rainy night in Sardinia played host to the country's World Cup debut.

The opponent was a familiar one. Two years ago, Ireland beat Bobby Robson's England in one of the biggest shocks of major championship history. This time, England were ready, and a lot better, but still couldn't beat the Irish.

Ireland went behind to a 8th minute Gary Lineker goal Jack Charlton will not have been pleased by, but didn't lose their composure, and eventually were rewarded with Kevin Sheedy's 72nd minute equaliser.

A draw was a fair result in the end. Other than England's goal, Ireland played the first 30 minutes entirely on their own terms. While it wasn't always the prettiest to look at, Ireland were incredibly well drilled, and it wasn't so much long ball as quick ball. The team, to a man, got the ball forward fast. Sometimes long, sometimes short, but always quickly. There was no dwelling on the ball, and no opportunity for the English to relax. Terry Butcher and Des Walker in the centre of the English defence covered a huge amount of ground having to clear balls arriving from all angles and into all angles. Up front, Tony Cascarino was a handful in the air, making sure that Butcher and Walker could never relax.

Unlike Stuttgart two years ago, the early goal went to England and not Ireland. It didn't rattle Ireland who got right back to the plan and had a very strong period of play immediately after the goal without ever creating many chances.

Unfortunately for players and spectators alike, the conditions then took over. The wind made Ireland's style incredibly difficult while a lightning storm and downpour in the second half made it even worse. Chances were incredibly limited, especially for the Irish. Ironically, Ireland were at their most abject and their challenge appeared to be fizzling out when the goal came.

That England were looking comfortable and starting to play some good stuff when Ireland got back in it speaks to the tenacity of this team who haven't been beaten in 19 months. 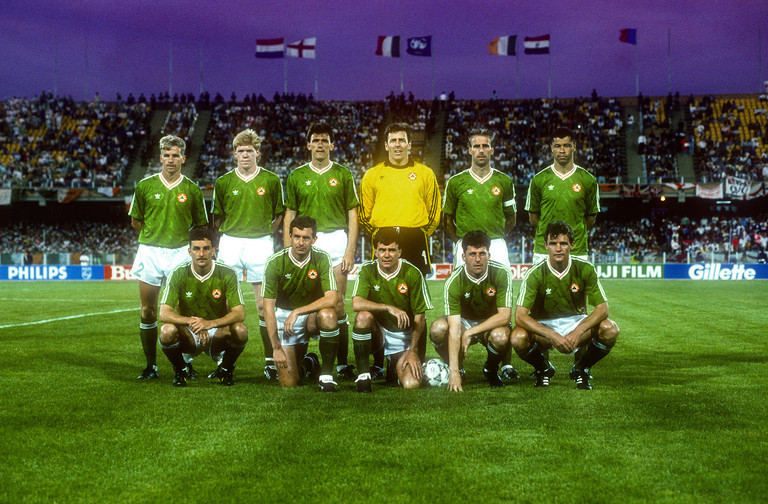 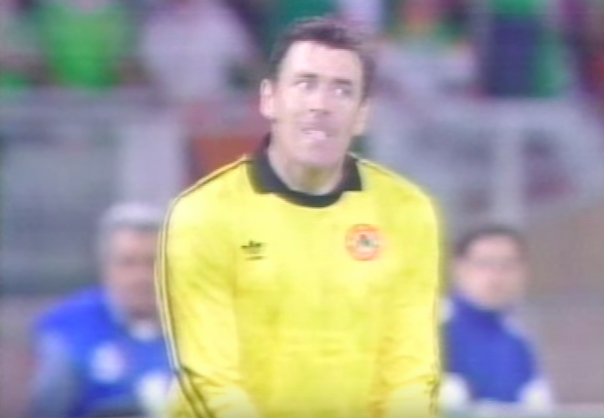 Should have done better with the England goal but the mistake had been made. Was solid elsewhere. His kickouts didn't have their usual accuarcy and distance in the conditions but came up big with a grimace when it was needed most.

Kept John Barnes to merely a rumour throughout and got forward well in the first half, engaging in nice interplay with Houghton on the right wing.

Ireland's captain completely misread Waddle's cross in the wind, costing Ireland their first competitive goal against since the defeat in Seville back in 1988.

McCarthy's first long throw of the night caused chaos in the wind but was never replicated after that. Was often wasteful in possession but did made a big tackle on Barnes in the second half when he looked to have been done for pace. 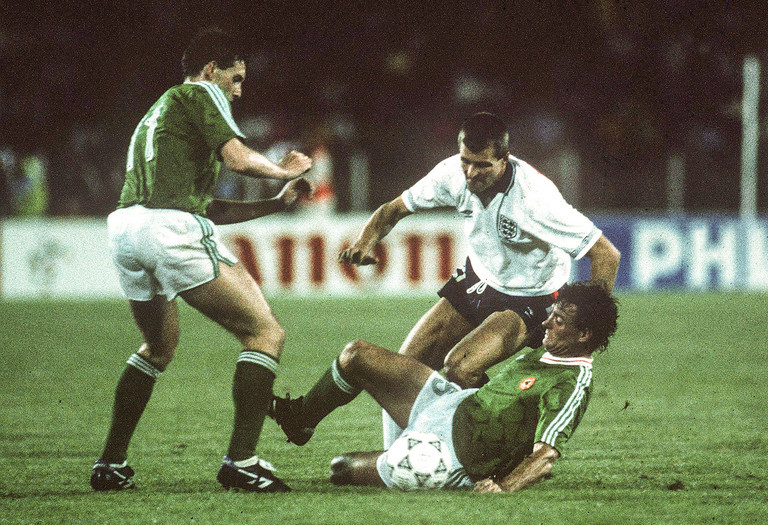 The rumour all week was that David O'Leary would replace Moran for this game. That didn't pan out and Moran didn't let Ireland down. Was another not to shroud himself in glory for Lineker's goal but did made a big block on the same player when he had a chance after 40 minutes.

Moran lunged in on Chris Waddle half way through the second half and easily could have conceded a penalty at a pivotal point. Luckily, Waddle made far too much of it and the referee played on.

The other rumour of the week was that Chris Hughton, who marshalled Chris Waddle brilliantly in Stuttgart two years ago, would be preferred to the Liverpool man at left back, but Staunton kept his place in the end.

While Staunton saw a lot of ball throughout the game and was Ireland's main source of the quick, go-forward ball so essential to their style of play, the quality was lacking most of the time with the wind playing havoc. In the end, too much ball went long giving the Irish forwards no chance and putting the English under no pressure.

Waddle, as to be expected, got past him once or twice but he was generally solid defensively. He arguably fell asleep for the England goal, assuming the ball had gone for a throw when Waddle picked it up with far too much time on the ball.

Not quite the bright start of Stuttgart for Houghton but he was Ireland's best player in the first half an hour, popping up all over the midfield and showing a subtlety that was otherwise lacking in the Irish players. In this time, a quick bit of thinking set up a half chance for Cascarino, while he was pole-axed by Des Walker for what could have easily been a penalty.

Faded from the game completely in the poor second half, though he did intercept Bryan Robson and set up Cascarino again for arguably Ireland's only half chance of the second half outside of the goal.

Anchored the midfield with a poise that even his opposite number and former captain Bryan Robson would be proud of. His incredible positional sense meant he provided a wall in front of McCarthy and Moran both on the ground and in the air throughout.

While McGrath shielded the back four and kept Gascoigne quiet for most of the game, he was also one of Ireland's best on the ball, laying off quick, accurate passes time and again that set attacks going. Was dangerous in the air too in attack, and even had a stunning half volley shot from 30 yards that just cleared Shilton's crossbar. Ireland's best player, not for the first time.

Probably would have played on the left if Ronnie Whelan had been fit but the Norwich City man looked perfectly at home in the middle of the park alongside McGrath. On just his 13th cap, and his fourth competitive start for Ireland, Townsend was always assured and didn't put a foot wrong, even if the game sometimes bypassed his position. 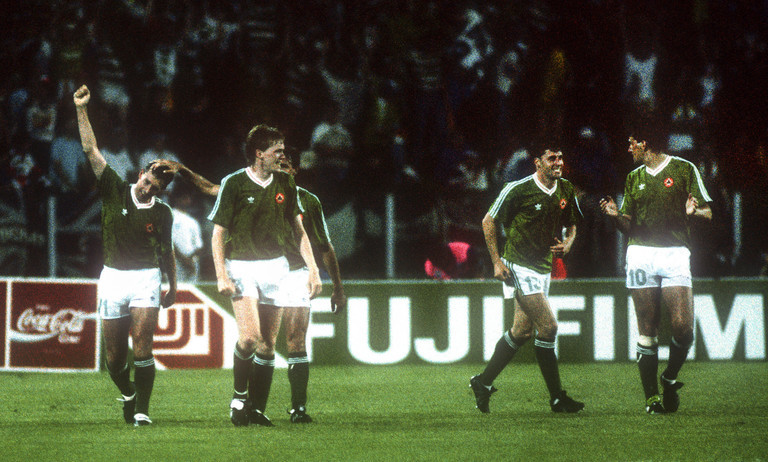 The hero of the day! Nobody will ever forget the day Sheedy saved the day and scored Ireland's first ever goal in a World Cup finals. A beautiful finish summed up one of his best performances in a green shirt.

From the start, the Everton man showed great awareness and reading of the game, and was constantly in the right position in the Irish midfield for a rebound from Cascarino or one of the English centre-halves. Being the right man to pounce, twice, for the goal, wasn't a fluke.

Elsewhere, he worked tirelessly, helping out Staunton down the left and was a nightmare for the poor Gary Stevens.

Ironically he would have likely not started if Ronnie Whelan hadn't been injured.

I've no idea how John Aldridge plays for Ireland under Jack Charlton. Once again, he was given the thankless task of running the channels until he dropped and, as usual, he did it to perfection. While he didn't have the most obvious impact on the game, his running and pressure on the English defenders meant England could rarely establish any comfortable possession at all in the first half. His role is arguably the most important in the Charlton system, even if it robs Ireland of their most natural goalscorer.

He ran out of steam though and was replaced by Alan McLoughlin after 64 minutes.

Caused problems for Walker and Butcher throughout, especially early on. Didn't really test Shilton with his only real chance in the second half.

Adding an extra body to midfield when 1-0 down seemed a strange decision but Ireland needed to get more of a grasp on the game to get back into it. Before that really materialised though, Sheedy had equalised and it became a different game again.

He didn't have the veracity on his kickouts as Bonner and looked a little suspect under the Mick McCarthy long throw but wasn't really put under pressure outside of the goal. Equaled Pat Jennings's all-time international record with his 119th cap.

A poor performance. Looked out of his depth.

Was run ragged in the first 20 minutes but actually settled at looked comfortable against Aldridge and Cascarino. 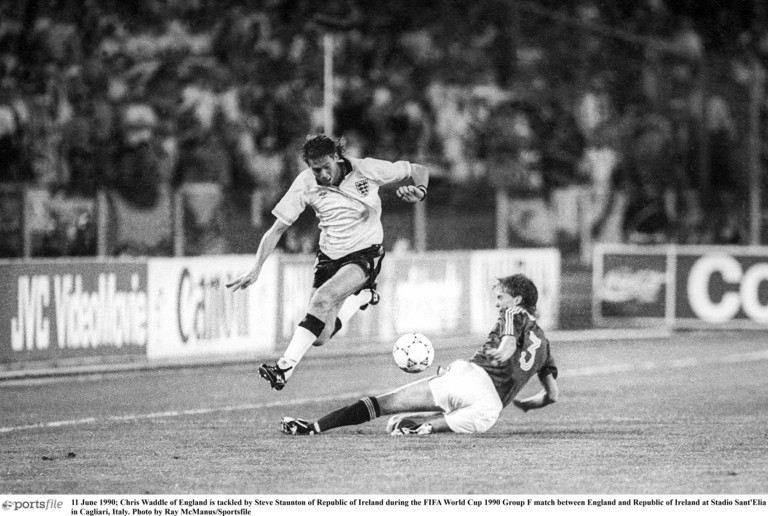 A beautiful ball for Lineker's goal made a fool of the Irish defence and he was generally England's most dangerous weapon. Probably should have won a penalty too after his best dribble of the game in the second half.

England's captain was calm and assured, and was happy to let others be creative. Missed a good chance on the back post. Also sloppily gave the ball away in a very dangerous position to Ray Houghton.

So clearly a better pure footballer than anyone else on the pitch. Showed signs of inexperience at times in giving the ball away in his own half and didn't have an easy time marking Paul McGrath, but everything he did had a touch of class and he could unlock space for teammates at will.

Also apparently played the game. Was better at least than Steve McMahon who replaced him. 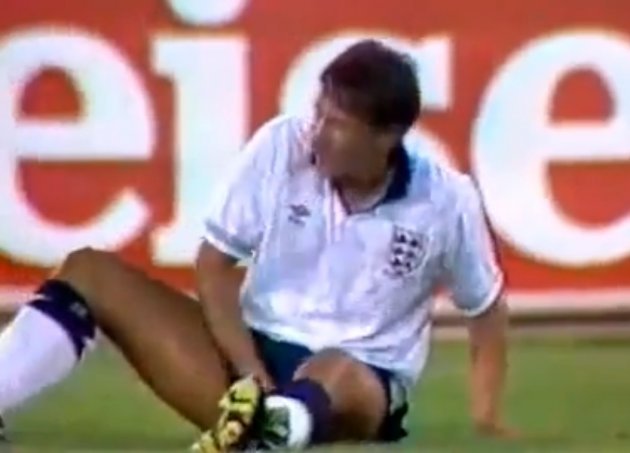 Left every bit of himself, and more, on the Cagliari pitch.

Took his goal really well with a shrewd striker's instinct that outsmarted Bonner. Was clearly unwell and faded from the game, even being replaced late on with England chasing a winner. 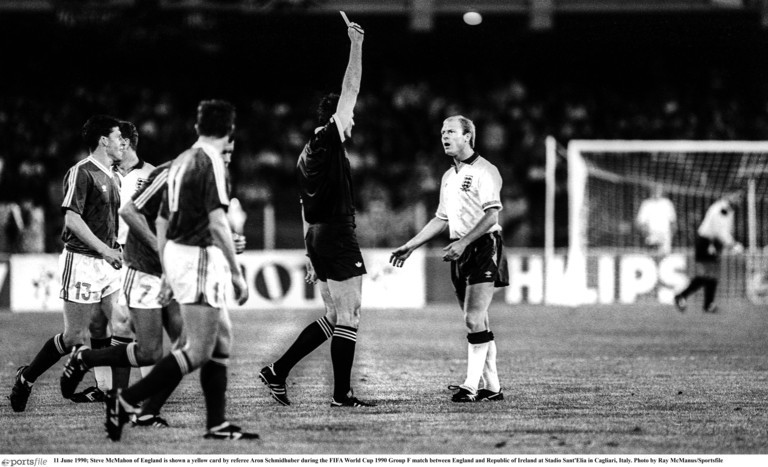 Poor Macca. Came on with England leading 1-0 and Ireland's challenge fading. Made an inexplicable balls of possession on the edge of his own box gifting Sheedy his chance. A couple of minutes later, he was booked for a clash with McGrath. Not his night.

Right, on to Egypt for a handy two points which should set us up very nicely.

SEE ALSO: In Pictures: The Day Ray Houghton Put The Ball In The English Net

Other Sports
3 weeks ago
By Balls Team
Packie Bonner, Anthony Nash And Others Who Helped Inspire Rule Changes In Their Sport
42

Football
7 months ago
By Balls Team
How Bill O'Herlihy Captured The Mood Perfectly On The Most Important Day In Irish History
Football
11 months ago
By Jonathan Byrne
Niall Quinn Discusses His GAA Youth, Italia 90' And Jack Charlton In New Doc
Previous Next

Other Sports
3 weeks ago
By Balls Team
Packie Bonner, Anthony Nash And Others Who Helped Inspire Rule Changes In Their Sport
Football
7 months ago
By Balls Team
How Bill O'Herlihy Captured The Mood Perfectly On The Most Important Day In Irish History
Football
11 months ago
By Jonathan Byrne
Niall Quinn Discusses His GAA Youth, Italia 90' And Jack Charlton In New Doc
Popular on Balls
Basketball
1 day ago
By Eoin Harrington
Kieran Donaghy And Tralee Warriors Claim National Basketball Cup Title In Tallaght
Football
1 day ago
By Gary Connaughton
Carragher Reveals Unhappy Instagram Message From Lionel Messi After MNF Comments
The Rewind
1 day ago
By Gary Connaughton
Quiz: From Which Irish County Did This Company/Product Originate?
Football
2 days ago
By Jonathan Byrne
Women Footballers Call Out 'Embarrassing' Sun 'Exclusive'