Which Irish County Would Have The Best Five-A-Side Team?

The end of the football season (in most countries) might mean tournament football for some places. But in Ireland, even when we get tournament football, it gets taken away from us. Of course, we have the League of Ireland through the summer for us fans, but for the majority of our top players playing in the UK, it's a summer of nothingness. Except of course for the biggest tournament of them all!

Here, all we have is the (imaginary) Balls.ie annual All-Ireland Five-A-Side competition, where we decide which county in Ireland has the best five-a-side team?

The teams will be made up players currently fit to play five-a-side, rather than legends of the past. Retired players will be considered though if we think they get still do a job at this level.

Unfortunately, we don't think all of the counties in Ireland will be able to cobble together five players, so we'll include an amalgamation and a Rest of Ireland team. In honour of those who have qualified for Ireland through the Granny Rule, we are including a County England.

Dublin are among the favourites, as always. Their strength in depth is second to none. In fact, with the likes of Robbie Brady, Jeff Hendrick, Wes Hoolahan and even 40-year-old Robbie Keane looking on from the sidelines, we could have easily split Dublin in two... no hold on. That's another game.

While there are a host of goalkeepers to choose from, we've decided to throw 19-year-old prodigy Gavin Bazunu in after making his senior debut this season.

The two wings are well looked after with wing back specialists Enda Stevens and Matt Doherty, but the creativity will come from Jack Byrne in the middle. Troy Parrott may not have the best season in the Championship and League One, but we're confidence he will be on the end of a lot of good ball in this team and will be banging them in.

Strengths: It's going to be very hard to get the ball off this team and there's creativity all over the place. Expect a few long range worldies too.

Weaknesses: A little light weight for this level maybe, and there's a worry about the lack of a commanding defensive presence in the centre, putting pressure on an inexperienced goalkeeper.

This Cork team will challenge the Dubs for favourtism and have a lot of similarities to the Dubs to their rivals from the capital. The centre of midfield looks in great shape, and the advantage of an actual goalkeeper always helps in this format.

Liverpool keeper Caoimhín Kelleher is a simple choice between the sticks. Ahead of him, John Egan will man the defence on his own. We considered Denis Irwin, who's 55, but decided against owing only to the passage of time.

Roy Keane, who turns 50 this year, has made it into this team as recently as last year. His presence, his ability to scare the shit out the oppisition, and his will to win would make him unstoppable at this level. However, with two first choice CURRENT Irish internationals in the centre of midfield, it's perhaps time to move on without the Mayfield man. He immediately takes over as manager.

Alan Browne will instead start in the centre, providing the energy alongside Conor Hourihane, whose passing and long-range shots will wreak havoc against the teams with outfield players in goal.

Adam Idah is to Cork what Troy Parrott is to Dublin and is going to provide the goals for this team.

Colin Healy was briefly called up, but a day later was sent home.

Strengths: Quality all over the pitch. Sublime passing and strength through the centre. Roy Keane is their manager.

Weaknesses: Pace is lacking, as is width, especially against the Dubs. Roy Keane is their manager.

Another county with a fresh and exciting Irish striker to lead the line.

Galway will have to rely on the retired David Forde in goal, with him having called it a day a couple of years ago but still easily good enough for a tournament like this.

The oft injured Greg Cunningham is at the back, with Swansea's versatile Ryan Manning and Daryl Horgan ahead of him. Aaron Connolly will be expected to supply the goals. It's the strongest Galway squad in many moons and they could cause a few upsets.

In the absence of an obvious choice, Galway will be managed by Ireland's Greatest Football Man: President Michael D. Higgins.

Strengths: The goals could come from anywhere with an exciting attack. Have the president pulling the strings.

Weaknesses: A bit light in defence.

This is a cross-border competition, so Antrim can claim to be a strong contender for the crown.

The first team to go without a goalkeeper, though we strongly considered Ayeisha McFerran! We went without in the end because, defensively, they are exceptionally strong, in the sense that they are a side comprising almost solely of defenders. This means Steven Davis is the only non-defender in the Antrim team, so he will be in midfield alongside Paddy McNair. Craig Cathcart will be at the back, with Johnny Evans drawing the short straw in being the defender who ends up as fly goalie.

As Gerry Armstrong is in his sixties, we think he might be just too old, so we've decided to put 41-year-old retired centre-half Gareth McAuley up front, who is just two goals short of Armstrong's goal haul at major tournaments.

Stoke City manager Michael O'Neill, who was born in Portadown, but grew up, luckily for Antrim, in Ballymena, will be in charge, so familiarity with a number of his his ex-Norn Iron players should go a long way here.

Strengths: They should be relatively solid at the back.

Weaknesses: They could play until Gareth McAuley is in his sixties and not score a goal.

A dark horse. Along with being able to draw on the managerial genius of Martin O'Neill, Derry also have great depth. They do however, lack a goalkeeper: we think Shane Duffy is the best man to slot in between the posts. That means that Shane Ferguson will have to drop into the defence, but the rest  of the team looks very strong: Hearts' Aaron McEneff in midfield , behind James McClean. They also have an ace in the pack to link the midfield with McClean: the three year retired, but only 37-year-old, Pat McCourt.

Strengths: They'll score a hatful of goals. Work rate will be huge. And they have Paddy McCourt!

Weaknesses: Might concede a few, given that the only defender is in goals and the midfielder is at the back.

Waterford have just abut cobbled a team together, with a serious mixture of experience and youth.

At the back, young Lee O'Connor will anchor the defence. He will play ahead of former Manchester United goalkeeper John O'Shea. Derrick Williams will return from the MLS to provide some more experience at the back in a very defensive team.

Cappoquin's Jayson Molumby is another big hope for the future of this team and will anchor the midfield.

38 year-old Daryl Murphy will still do a job up top.

The serious bang of a team in transition about this Waterford team.

Strengths: Plenty of nous in the team, and a goalkeeper who never concedes.

Weaknesses: Two members of the team are retired, and two others are kids. Not sure where the goals come from.

The first of the amalgamations on this list. Darren 'The Fastest Hands In Bray' Randolph is the outstanding goalkeeper of the competition, playing behind Rochdale's Paul McShane.

The midfield is filled by Sligo Rovers' Greg Bolger, along with another player with League of Ireland experience: Lee Chin, who played with Wexford Youths a few years ago.

Strengths: Should be solid at the back, and could launch a superstar up front.

Weaknesses: Midfield could be an issue, particularly if the games are scheduled around the time of the All-Stars banquet.

Sadly, the remaining counties have been forced to come together to form a team. The good news is that it's really quite good. Tipperary's Shane Long leads the line, and the team's outstanding player is the Irish captain, Seamus Coleman.

Kildare's Mark Travers will be the safe option in goal while Meath's Daragh Lenihan is selected ahead of another Kildare man Nathan Collins in defence.

Kilkenny's Seani Maguire is also a must in this team.

Strengths: As a collection of players, it's as good as any in the tournament.

Weaknesses: There's no midfield... at all.

Happily, in this competition, Perfidious Albion is merely a county. They'll be strong mind: Keiren Westwood in goal, Ciaran Clark at the back ahead of Richard Keogh, Callums Robinson and O'Dowda in midfield, all in support of David McGoldrick.

Jack Grealish and Declan Rice asked to be considered for selection, but the FAI later confirmed they had in fact given manager Mick McCarthy the phone number for the talking clock.

Strengths: Extremely physical, but with a fast and inventive midfield. Exciting team.

Weaknesses: May struggle somewhat for goals.

We feel that Dublin will be the ultimate winners, despite strong challenges from Cork, England, and the Rest of Ireland.

What do you think?

Quiz: Can You Tell Us From Which County These 15 Irish Footballers Hail? 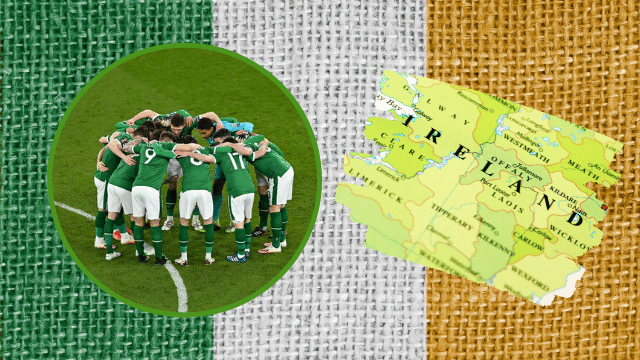