Jim Conlan of Raidio Corca Baiscinn has apologised to Manchester City and Kyle Walker after a mix-up about 'Bernard Mendy' during a press conference midweek which has gone viral.

The sports journalist, representing the West Clare community radio station, explained the gaffe to Mark Tighe in the Times today.

Conlan got into a name-based confusion of sorts which left Walker bemused before their Champions League clash against Club Brugge on Wednesday night.

Conlan asked Walker, "Just wondering what the competition is like for you going up against Bernard Mendy for the right-back spot, does Bernard push you all the way and I hear he's a bit of character as well."

The Manchester City defender needed a repeat of the question, as Conlan was possibly referring to teammate Benjamin Mendy, who is currently suspended after being charged with four counts of rape in August.

Who is Bernard Mendy?

Bernard Mendy was indeed a full-back, having played for PSG between 2000 and 2008. He's currently assistant manager the club behind Mauricio Pochettino.

To add to the confusion, Ferland Mendy is currently a full-back playing his club football with Real Madrid. He is neither a relation of Bernard nor Benjamin.

Conlan - a stalwart at press conferences - explained the situation on Wednesday in a tweet that he deleted:

"I have spoken to Pep and numerous Manchester City players on a regular basis without any incident in the past. On any given day, there can be so many soccer stories that some may slip your notice. Yes, I got a tongue twist regarding a 1st name which was unfortunate."

Yesterday, he told Mark Tighe of the Times the mistake 'wasn't intentional' and occurred after his prepared question had already been asked by a fellow reporter.

"I was unaware of the situation regarding the criminal proceeding against Mr Mendy when asking the question,” Conlan told The Times.

"I had no intent to put Kyle Walker in a difficult position or to try and wrongly deceive him to gain a story or publicity for myself or my radio station."

Conlan reached out to Manchester City within minutes of the press conference after he noticed his mistake. Manchester City accepted his apology and have no further comment.

Benjamin was frequently deployed as a left-back before his suspension at Manchester City, something Conlan was aware of.

He says he knew the French international slotted in at right-back at his former club Monaco when their starting player was injured, so that's why he posed the question to Walker.

While the video clip has since gone viral and people have been making light of the situation, many have been directing comments towards Conlon's personal social media channels.

"If I had said by mistake Oleg Zinchenko this would not have blown up. It’s a tough lesson but it wasn’t intentional."

See Also: Why Umbro Ireland Are Bringing Back Orange For The 2022 Ireland Away Kit 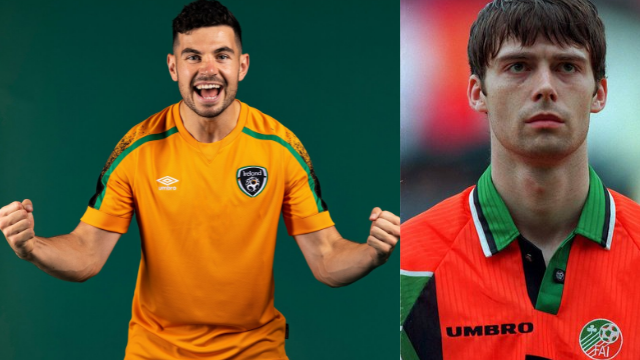