The 'League of Ireland brand report' has been published. The report was produced by award winning brand consultant and author Jonathan Gabay. The man himself gave a presentation on his findings for the benefit of the football media this afternoon.

For those present, this appears to have been an unforgettable experience. Or, as Dan McDonnell put it, "extraordinary, just extraordinary."

First, who is Mr. Gabay? According to his website, he is a brand consutlant who blends marketing experience with psychology. He has published a book entitled 'Brand Psychology'.

Through the blended use of marketing and psychology, he says he has "devised an approach for brands which addressed cynics intelligently and authentically." 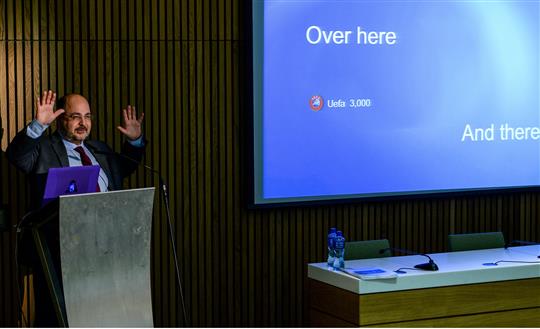 He was invited to analyse the marketing of the League of Ireland and to suggest innovative ways of marketing the League.

He made a promising beginning - at least in the eyes of  those who commissioned the report.

'Under John Delaney it's been amazing' and so the presentation of the independent review by Jonathan Gabay is underway.

It would appear that John Delaney and the FAI's near blamelessness for any of the problems of the League might be facing was a common motif throughout the presentation.

The clubs and fans, on the other hand, were taken to task constantly.

Already this is beginning to sound like an assault on clubs - and they are far from paragons - while lauding the FAI.

Next part of presentation focusing on how flares and supporter behaviour has been bad for the brand. I cannot believe this is a key point

Independent expert irked by those who criticised FAI's €5,000 offer to clubs. "We've got to grow up irrespective of whose right or wrong'

The FAI duly praised for their efforts, and the fans duly chastised for their attachment to flares, it was time to move onto the real positives that do exist.

"The League is not that bleak," according to Gabay. In fact, it "is cool".

Cork City receive kudos for their top notch curry chips which will please those at Turner's Cross.

Not only is it not that bleak, it's cool pic.twitter.com/T4DDCx2UYT

Pretty special on the one slide to spell it "Saint Pats"; "St Pat's" and "St. Pats" pic.twitter.com/ohwknSskFX

It is essential here that the FAI keep their cards close to their chest. He also invented a very interesting new concept - "confidential transparency."

'You don't tell the entire world everything. It doesn't make sense.'

'There should be confidential transparency' he says in relationship to FAI sponsorship deals.

He's having an imaginary phone conversation on stage with a company called Joe's Pork Sausages. 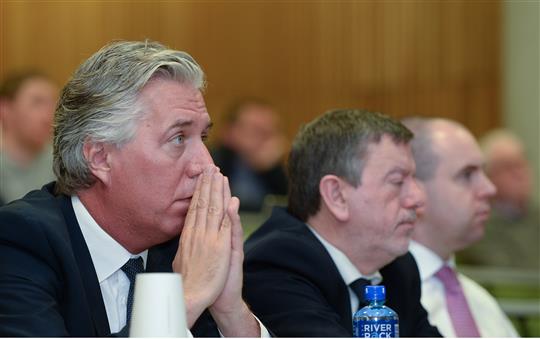 Then came the ideas section. By some distance, this was the most memorable section. Gabay tossed out a range of new ideas, which might charitably be described as "left-field"

A live half-time EA Sports tournament broadcast on giant screens is another idea. Which begs the question...what giant screens?

'Why not paint the bus stops around grounds in club colours?'

Gabay talks about heritage in the areas of each club. He asks why the poetry of Yeats is not painted on a mural in The Showgrounds?

W.B. Yeats is the man to save the League of Ireland pic.twitter.com/fDAYusAiET

A Hollywood walk of fame leading up to grounds of local club has been recommended. Just saw a slide of a star with Pat Byrne's name on it.

PHASE 6: Taking on the TV guys

RTE Sport and Eir Sport took a kicking on account of their allegedly boring TV camera angles. Of course, the clubs don't want their games on TV. Shamrock Rovers wrote to RTE asking them not to come to Tallaght at one stage in 2015 season.

Onto TV coverage now, slaughtering the camera angles. "Some of the angles made the games look boring, dreary, dull."

One of the tangible things to emerge from the report. A new logo was unveiled.

The logo's not bad to be fair pic.twitter.com/6CgxMvy9FL

Here's the new logo on a bus pic.twitter.com/pr0AvDcmKX

And then, it was over. The verdict from the Irish football writers community would appear to be uniformly negative. Some had aged quite a considerable bit in the previous hour.

This is simultaneously the greatest day of my journalistic life and the most worrying as a League of Ireland fan.

It's over now. I know FAI will think some of these tweets are just typical media moaning but that was extraordinary, just extraordinary.

FAI's branding guru Jonathan Gabay earns £7k per speech....so think of how much he's earned to "consult"on League of Ireland

As for Gabay, here he is outlining he is discussing "brand marketing and subliminal advertising" on RT last year. His headline comment is that "one of the most powerful brands today is ISIS".

We hasten to add that he does not support or admire ISIS whatsoever.

Read more: "A Party Where All The Beautiful People Had Left"- The Story Of How There Came To Be Two World Darts Championships