Why Are Irish Managers Disappearing From Sight?

Dave Richardson travelled to Merrion Square with a profound reputation. He was the Premier League's head of youth development and, despite the demands of his job, he was happy to meet with John Delaney in relation to putting valuable systems in place, all for the benefit of Irish football.

Eoin Hand, by and large, was the architect of the meeting which took place at the old FAI offices.

As Hand and Richardson sat opposite the FAI CEO, buoyed by big ideas, and eager to see Irish football portrayed as a contemporary force, Delaney was a picture of indifference. You would have thought that this indifference would be against the best interests of the association, given he was sitting in the room with one of a number of cogs in the Premier League mammoth, and with a man whose enthusiasm for Irish football has few peers.

Hand and Richardson should have been seen as a concoction made in footballing heaven. Delaney didn’t see it that way.

“It was embarrassing,” says Eoin Hand, the former Republic of Ireland manager, reflecting back on that 2006 meeting.

He flew over and came to Merrion Square and Delaney was on his phone all throughout, for about 15-20 minutes. He was no more interested and this man was the expert in the field in the UK.

“[Richardson] came out of that meeting and said: ‘That’s the most ignorant man I’ve ever met.’ It was shocking.”

The primary subject of the meeting was to explore the possibility of opening up a National Academy which Hand believes would have been of benefit to young players and coaches across the country.

The project never materialised and over a decade on from that meeting in the heart of Dublin, Irish football’s stakeholders are feeling the effects of the erstwhile chief executive’s myopia. Young coaches, in particular, would appear to be suffering the effects of the association’s lack of ambition. It wasn’t that long ago when Irish men were manning the sidelines at Premier League grounds right across England. Nowadays, there are only two managers from the Republic of Ireland across all four divisions of the Football League - Brian Barry-Murphy at Rochdale and Graham Coughlan at Mansfield Town. 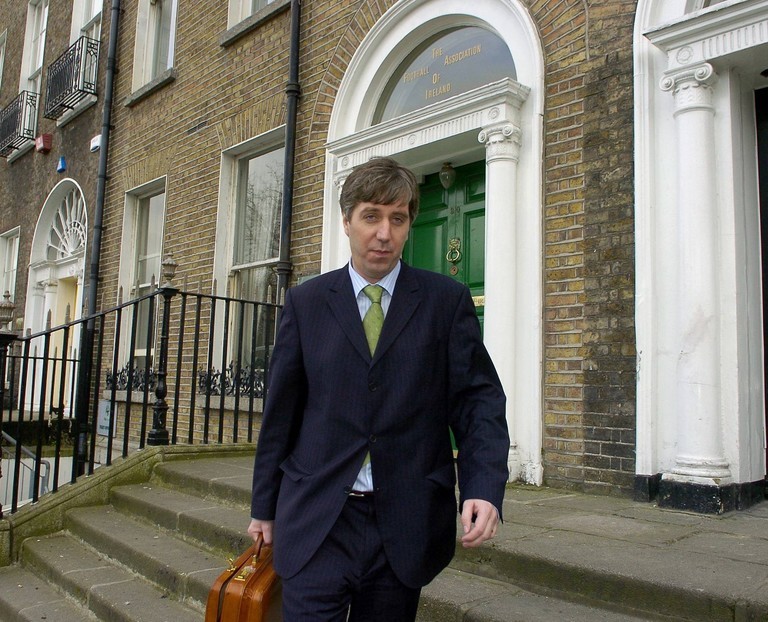 The simplistic view would be to put Ireland's dearth of managers down to the mass influx of foreign managers into English football over the past decade, but a little scrutiny hints at a situation that requires further introspection.

“Look at the bigger picture: it would have given a focus for an awful lot of good young players to come from a situation like the structures in Norway where you can combine education with sport.

“You would have had players taken into an elite group, taken into the academy. Then you could have had shadow programmes and they could have been affiliated with whoever they wanted to be with under the guidance of the FAI. They would have perhaps then moved to the UK.

“I went out to study Norwegian football and I spoke with the top man behind all the Norwegian development. It was very, very interesting. They have these regions where it’s very, very difficult to have a club in. They have these underage leagues where they approach an area and say, ‘Listen, we want to develop the game up here.’

“They would say that they’re not able to get 11. So they would ask: ‘How many would you have that would be enthusiastic about playing? Would it be seven or eight? 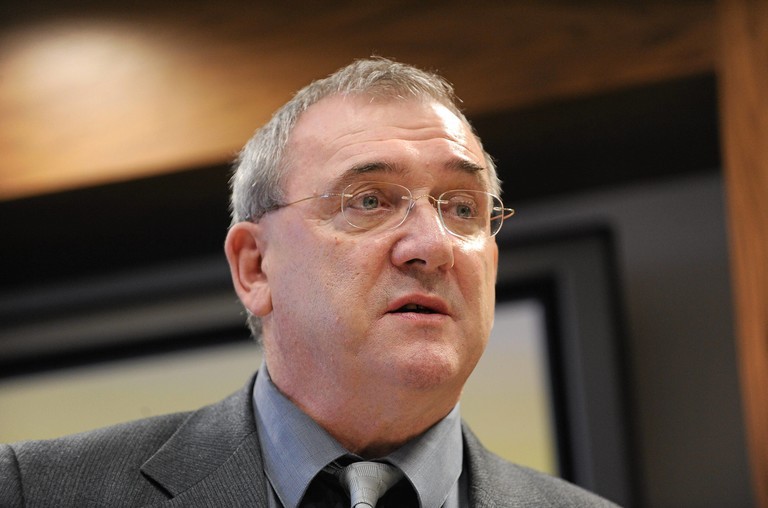 “So the government tells them they will play seven every time they play in the league and the other team will play with seven. The thinking there was: instead of losing seven, they’re gaining seven.

“Then the word will go out and it will become nine or 11 the second year. And the game developed nationally. You could say the same about Danish football. We wouldn’t even dream of that.”

Nevertheless, how does any of this relate to the dearth of Irish coaches and managers coming up through the ranks?

“It’s the same with coaching. There are no opportunities for anybody to go through a proper coaching structure. In the past they had to go somewhere else to do it. And if they did go through the FAI it was ridiculous as there was actually fellas giving flippin’ certificates because they were in a position that they had to.

I know for a fact that people were told, ‘Make sure that he passes’ - just to give him the certificate that says coach. You had all this sort of thing going on.

Stephen Kenny, with all the success that he had, went to Scotland and it didn’t work for him there. It’s a totally different scene. Stephen had just a League of Ireland background. He’s a much more developed manager now. You have to be established to be wanted abroad.

“Nothing but good would come of [a national academy]. You start, should we say, a trend. Coaches would be developed here and they can then be enticed to see how coaching works at the top clubs.

“Then you would have a pool of people qualified. They would be wanted and they would have built up a reputation - Irish coaches are very, very good, they’re very dependable, they use their imagination.”

Coughlan, currently plying his trade with Mansfield Town in League Two across the Irish Sea, also sees the benefit of having a system in place in Ireland that would enable coaches to develop.

After retiring from football he earned his coaching badges in England and is the first to admit that he received a little help from Lady Luck along the way. Support from the FAI however, despite being an Irishman, was minuscule.

“You have to have a pathway," he says. "I remember when I was growing up there used to be a FÁS course that you had to apply to get on to. That was great because you were getting your schooling, your education, and you were also getting footballing education as well. Now they do it over here.

“I’d love to see an academy system set up in Ireland whereby kids are educated, not only grammar school education but also football education. There’s potential, there’s opportunity, there’s facilities, I think there’s expertise - I just don’t know why they don’t do it, to be quite honest. It would certainly enhance us on the international stage in all age groups.

Let’s be honest, there’s an immense array of talent across in Ireland. We have - and I played at schoolboy level for 10 or 12 years - one of the best and one of the most competitive schoolboy football [scenes] you’ll come across anywhere in Europe.

Academies and satellite stations are popping up over here and it would be great if we could jump on the back of that and pinch a couple of ideas. I’m sure the powers that be have valid reasons why we haven’t gone down that route in Ireland.

“The English FA have always invited me [to complete my badges]. I’ve yet to be asked or invited by the FAI. I was asked 12 months ago when we were across in Ireland. We took Bristol Rovers over and the FAI were out in Johnstown.

“The FAI asked us to address the candidates on the Pro License, so I had 15 or 20 minutes with them - basically a Q&A with them really. But the FAI have never shown any real interest in me to be quite honest.

“I’ve not played League of Ireland, I’ve not represented my country - so, on the same token, why should they? I love my country and [I’m available] if they ever needed anything, or wanted anything, because of the databases and things you build up over here. 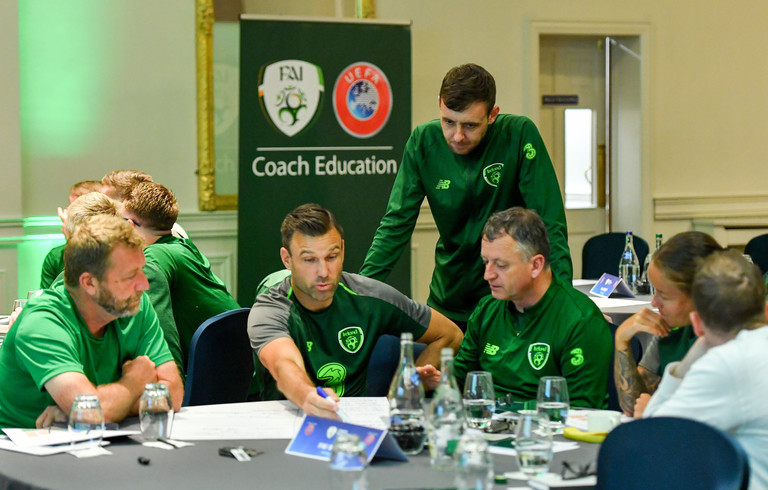 “And I’m really, really surprised that they don’t actually tap into the good Irish people that are over here. All we want to do is help our own. There is a wealth of experience and a wealth of knowledge across the water.”

Like Hand’s proposal regarding a national academy which could cultivate both playing and coaching talent, Coughlan has been surprised by the failure to set up coaching clinics in England. Those clinics could subsequently be used to develop Irish coaches as well as catering to the needs of players with aspiring careers abroad.

“I’d love to get coaching clinics over here where all the Irish lads meet up over here instead of travelling over and back to Dublin. You get a training ground for a day or two, you get in and you do some coaching sessions with them.

“Every Easter, or twice a year since I’ve been over, I always have the underage kids at Cherry Orchard and at different clubs in Dublin visit us, playing in games against teams over here. Some tap into it, some don’t.”

These are decisions, however, that should have been taken a decade ago, when people like Richardson were happy to get involved, when people like Hand were still involved and bristling with exuberance for the game, and when plenty of young Irish managers were searching vigorously for the breaks Coughlan was ultimately afforded.

The outlook is a lot bleaker for the association today, and that transcends down to grassroots level.

“It is ironic that we’ve always had to depend on our players going to England to play at the highest level to represent Ireland,” continues Hand. “It’s much more difficult now and the current situation has made it worse.

“Right now you cannot see any openings. Look what has happened with Limerick. It’s a fantastic sporting city but where’s the player pathway for anybody with a good ability that might be playing with Pike Rovers or whoever in the junior league down there. There’s nowhere they can go. The same applies to coaches.

“Most coaches become managers because they love the game, but they knew they were never going to be good enough to play at a professional level. Maybe there are coaches that would disagree with that. I think that’s a fair assumption. How are these coaches going to develop?

They could be coming to Ireland as well. Everybody would be sharing but you’d be showing that you wanted to do that. Then you’d qualify out of an academy, an academy that would be respected.

“It’s disgusting what has happened; it’s also laughable. We are a laughing stock. How any country could let their national football association get like that, in the biggest game in the world. It'ss incredible.

“You’ve got to accept that that is the case with everything to do with Irish football right now. You’re going to have to rebuild everything because that’s how bad it is.”

The unfortunate truth is Irish football has perhaps yet to reach a nadir, and one can only speculate on the future generations that will miss out on their desired careers - all due to a severe case of myopia.

Irish football is already a decade behind.