Irish Player Ratings As Mick McCarthy's Men Get Back On Track

Game, set, and the match! On a night where tennis balls will likely steal the headlines, Ireland maintained their 100% start to the campaign with a thoroughly encouraging performance in the win over Georgia.

While there may have been little between the sides on the scoreline, Ireland were a different side to the one we saw in Gibraltar. They passed the ball well, attacked with intent, and played like a side with belief.

Here are the player ratings from a good night at the Aviva Stadium.

Showed off some excellent distribution, with a range of passing we have not seen all that often. Came up big for his country once again when required, producing a stunning reaction save just before the interval.

It's not worth thinking where Ireland could be at the moment without him.

Flashed a couple of very dangerous crosses into the area in the opening quarter, neither of which were met by Irish heads. Continued to venture forward for the whole game, and was a consistent option down the right wing.

Was perhaps helped by the inclusion of Robbie Brady, who often drifted in field to leave Coleman the room to operate. His influence wained a bit as the game went on, but still a solid display.

Had very little to do in the opening period, but did not play out from the back as often as his defensive partner. Made a couple of vital interceptions in the second half, and was solid as ever. 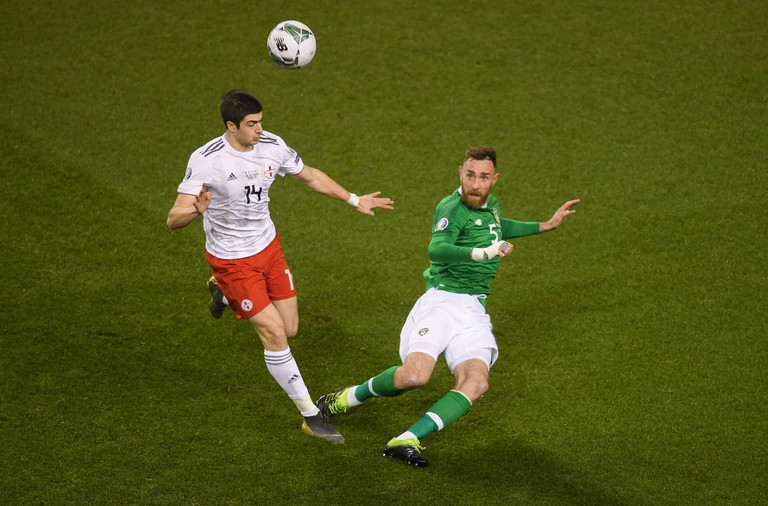 With Ireland clearly encouraged to play it out from the back, Keogh was not afraid to carry the ball into midfield at times. Snuffed out the danger quickly on the couple of occasions Georgia broke froward in the opening half.

Made some vital contributions as Georgia grew into the game as the match went on, defending like a lion in the last few minutes.

Was a willing runner down the left flank throughout, and perhaps should have been played in by McClean on a couple more occasions. Found Jeff Hendrick wonderfully for the disallowed goal, with what would have been an excellent assist.

Very solid defensively, and looks to have the left back spot nailed down for the foreseeable future.

Mick McCarthy's decision was justified. Whelan was his usual steady self, anchoring the midfield wonderfully. He gave Jeff Hendrick the licence to roam forward, contributing to the Burnley man's best performance in an Ireland shirt for quite some time.

He may not need to be in the team for every game, but Whelan can certainly still do a job in this side. 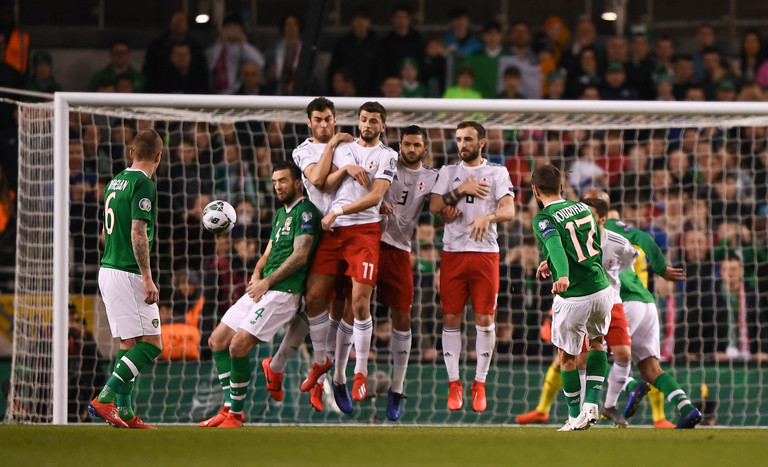 Had a golden opportunity to open the scoring early on, and perhaps could have played in Brady. Was not put off by the delay due to the crowd's FAI tennis ball protest, curling a wonderful fee-kick home to give Ireland a deserved lead.

Was not quite afforded the time on the ball he was in Gibraltar, but still picked out some nice passes. Hourihane put himself about as well, coming up with a couple of forceful tackles to turn over his opponents.

Put in a crunching tackle to set away Conor Hourihane for a glorious chance, something we don't normally associate with Hendrick. Drove forward from midfield, perhaps encouraged by the presence of Glenn Whelan behind him.

Consistently tried to get on the end of attacks, and was unlucky to stray just offside before tapping in Enda Stevens' cross. His best performance for Ireland in quite some time.

Was McCarthy right about dropping Doherty? Brady drifted in from the right flank consistently throughout the game, leaving plenty of space for Coleman to roam forward. Produced a wonderful round-the-corner pass to find Enda Stevens for Jeff Hendrick's disallowed goal.

He's stil working his way back to full fitness, but he is well on his way judging by this performance. 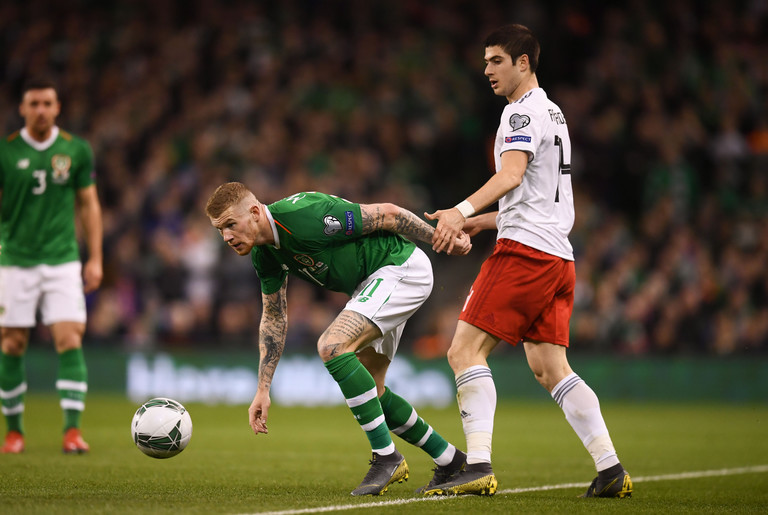 Worked tirelessly, pressing Georgia and forcing them to go long at times. Left a little bit to be desired in attack and would have been hoping for a better delivery into the penalty area, but tracked back relentlessly.

An encouraging improvement in performance.

Didn't give the Georgian defence a moments rest. Was forced to come deep a times in order to get on the ball, and performed somewhat of a thankless job. Turned the defence expertly on a couple of occasions only to be hacked down, and perhaps could have had a penalty just after the hour mark.

Rounded the keeper in the 71st minute, but was unable to get the strike off before the angle became too tight. Received a standing ovation from the Aviva Stadium faithful for an excellent display.

Neither player had the chance to impact the game, with Georgia driving forward late on. Worked hard out of possession, with Doherty offering an extra line of defence at times.