We deserved more. Ireland put in the best performance of their campaign, and really should have come away with all three points.

There were some excellent performances on the Irish side, but one lapse in concentration made all the difference. Such is football at the top level. We go again in March.

Randolph was uncharacteristically hesitant to kick it long, with the player clearly under instructions to pass it out from the back.

The Middlesbrough man had little to do in the game and was helpless for the opener.

His impact was most restricted to the defensive side of the game in the opening half, although he did show a couple of flashes going forward.

His run at the start of the second half got the whole team going, but he was massively asleep for the Danish goal. He saw the run of Braithwaite, but didn't track him. That made the difference in the end.

Rose beautifully to give Ireland a chance late on, but it wasn't enough. 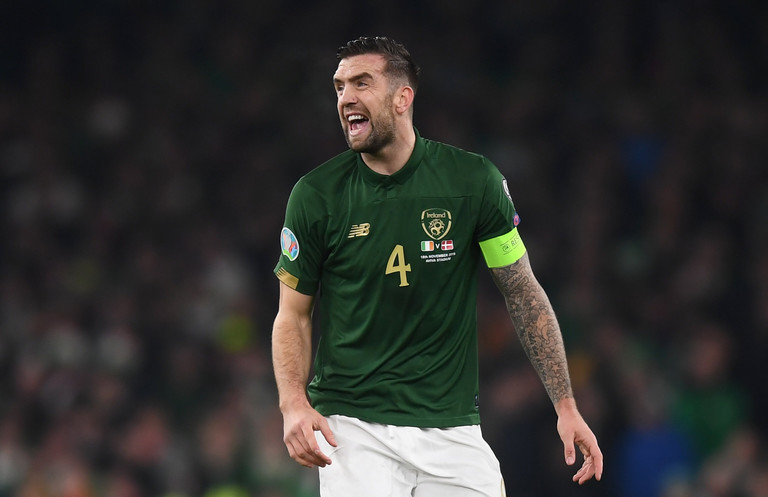 A colossus in the air, Duffy consistently demanded more from those around him. Duffy had a relatively quiet evening, but could do little about the Danish goal.

Came agonisingly close to getting his head on a couple of balls in the opposition box, but it unfortunately wasn't to be.

While Egan was not asked a huge amount of questions in the first 45 minutes, he dealt very well with everything directed his way. Unfortunately had to be withdrawn at halftime due to injury.

Defended brilliantly on a number of occasions in the opening period, stifling any attacks that came down the left flank. He was so cool on the ball at times it was mesmerising to watch.

Stevens drove Ireland on throughout the game, and his cross for the Doherty goal was nothing short of phenomenal. His most impressive Ireland performance to date.

At 35-years old, this was one of his best performances in a green shirt. Never afraid to get his foot on the ball, Whelan pulled off some eye-catching long passes at times. He worked hard off it too, stifling some dangerous looking Danish attacks.

Simply put, he was everywhere. Was withdrawn late on as we chased the comeback, but it had nothing to do with his performance. He left it all on the pitch.

Missed a golden opportunity to open the scoring around the half hour mark, where he really should have done better with what was an ideal chance for a left-footed player.

Delivered a couple of sumptuous balls into the opposition penalty area, but was muscled off the ball too easily on a few occasions. Substituted in the 68th minute. 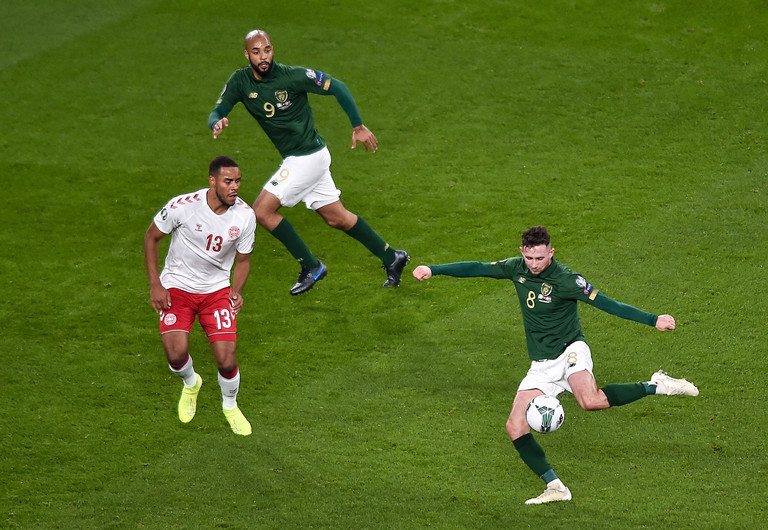 Was poor in possession on a few occasions, giving the ball away cheaply. Almost scored a wonder strike that fizzed just beyond the far post.

He failed to have the same impact in attack as his teammates, moving into a more central position after the introduction of Robinson. Worked hard, but it wasn't really his night.

Almost playing as a second striker at times early on, Hendrick pushed incredibly high up the pitch. He was hesitant to play the final pass at times, often looking backwards as opposed to forward. He seemed to miscommunicate with his teammates at times, who played passes in the opposite direction of where he had made his run.

He was a different player in the second half. Everything seemed to come off for him in a way it hadn't previously. He was fantastic on the turn, consistently acting as the link between defence and attack. Certainly a game of two halves.

Worked typically hard off the ball, he failed to get much going in attack although he did produce one fantastic run just before the interval.

That seemed to spark him into life as he came flying out of the traps in the second half. Much maligned throughout the campaign, this is the type of game where you see McClean's value. Undoubtedly his best performance of 2019.

Showed some beautiful touches early on, providing the type of linkup play that was sorely lacking in the previous two competitive games. Everything good Ireland did inevitably came through the striker.

Had a couple of half chances, although both were difficult. A goal was all that was lacking.

Had very little to do in the second half, but was a more than able deputy for John Egan.

Put in the hard yards after his introduction, Robinson was excellent. Put in one beautiful cross, which couldn't be steered home by McGoldrick.

Was a real live wire after coming on, and certainly had a part to play in the Ireland charge. In retrospect, he should have been brought on much earlier.