We're sure you missed a lot of things during the lockdown, but we know you'd be lying if you said you yearned for anything more than our weekly roundup of the performances of Irish internationals. Well the good news is: it's back!

It was a very strong weekend for the Irishmen across the water, most notably in the form of John Egan and Dara O'Shea. Elsewhere, Adam Idah staked his claim for a starting place at Norwich, while Ryan Manning continued to shine for QPR.

Here's the ratings in full:

Aaron Connolly started up front in Brighton's 1-0 victory over Norwich City, putting in another strong performance. He certainly impressed the Brighton & Hove Independent, who mentioned he looked disappointed not to have scored when he was substituted in the 72nd minute. Shane Duffy came off the bench late on for the hosts.

Adam Idah played 25 minutes off the bench for the visitors and came agonisingly close to netting his first Premier League goal. His late header rattled the bar in another impressive substitute display. He received a 6/10 rating from The Pink Un, who said he should Norwich's first choice striker for the rest of the season:

Another eye-catching cameo. Frankly would either of Pukki or Drmic have got across their man to glance that header against the foot of the post? Not on recent evidence.

Start him for the remainder.

James McCarthy came off the bench in Crystal Palace's visit to Leicester, but could do little to prevent them from falling to a 3-0 defeat.

It was not one of Matt Doherty's better days in Wolves' 2-0 home loss to Arsenal, with the right back failing to make much impact going forward. He got 5/10 from the Express & Star, although they did admit that the team looked worse after he was taken off after 70 minutes.

John Egan put in their Irish performance of the weekend, scoring his first Premier League goal and earning man-of-the-match honours as Sheffield United drew 1-1 at Burnley. It was some strike too.

John Egan with the equaliser! That's a striker's finish from the Irish centre-back.

The Sheffield Star gave marked him at 8/10 for 'another commanding display', with the centre back putting a second excellent performance on the spin after his heroics against Spurs.

Enda Stevens and David McGoldrick also started that game for Sheffield United, with both players rated as a 7/10.

Kevin Long was in the Burnley side, his first Premier League start of the season. Lancs Live said he experienced 'nervous opening but grew into the contest' in a 6/10 display.

Four Irish players were named on Southampton's bench for their 1-0 win over Manchester City, with Shane Long and Will Smallbone both making an appearance. Long earned a 7/10 from Saints Marching for an impressive 20-minute cameo, with Smallbone only entering in the final second.

In the Championship, there was a battle of young Irish midfielders as Jayson Molumby played the first half as Millwall kept their slim promotion hopes alive with a 1-0 win at Charlton. Josh Cullen was in opposition, playing the full 90 minutes for Charlton. Shaun Williams also came off the bench for Millwall.

Jason Knight started Derby's dramatic 1-1 draw with Nottingham Forest, although he was not on the pitch for Christ Martin's late equaliser. It was not one of his better performances, being rated at 5/10 by Derbyshire Live.

Stoke City produced an emphatic 4-0 win over Barnsley to ensure they stayed out of the relegation zone, with James McClean playing a key role. He was given an 8/10 by the Stoke Sentinel, who said it was a prototypical McClean performance in terms of the energy provided to the team. 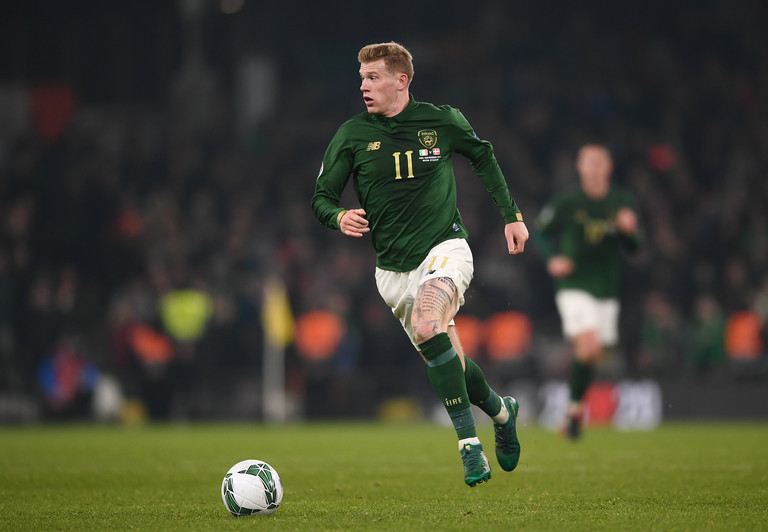 James Collins played the full 90 minutes for Luton Town but could do little to stop his side falling to a 5-0 defeat at home to Reading. They sit bottom of the table, five points off safety.

Preston's play-off hopes took another major blow with a 0-0 draw at Huddersfield, with Alan Browne starting for the away side. It was a 'decent' performance from the Cork man according to the Lancashire Post who gave him a 7/10, while Sean Maguire got 6/10 for his showing off the bench.

Harry Arter and Cyrus Christie both started Fulham's 1-0 win over Birmingham City, a result which moved the club nine points ahead of seventh place with five games to play.

Bristol City fell to a 1-0 defeat at home to Cardiff City, with Callum O'Dowda starting on the left wing. He 'carried the ball nicely at times' in a 6/10 showing according to the Bristol Post.

Darragh Lenihan was unable to stop Leeds United moving a step closer to promotion, with Blackburn falling to a 3-1 home defeat. The defender was given a 6/10 by Lancs Live, with that loss all but ending their promotion hopes.

Ryan Manning registered the vital assist as QPR recorded a 1-0 win at Middlesbrough.

It was a cracking ball from the Galway native and an even better finish from Jordan Hugill. Manning was given an 8/10 by West London Sport, who rated him as QPR's best player on the day. An Ireland call-up is surely around the corner.

West Brom took another huge stride towards automatic promotion with a 4/2 win over Hull City, with Dara O'Shea playing the full 90 minutes at right back. The Express & Star were hugely impressed with his performance:

A near faultless display from the Dubliner who should be immensely proud of the way he has conducted himself since being asked to fill in at right back.

Strong in the air and good on the ball, O’Shea also made one crucial interception to cut out a through-ball to Keane Lewis-Potter (8/10).

In League One, Ronan Curtis scored Portsmouth's goal in their 1-1 in the first leg of their play-off semi-final against Oxford United.

Ronan Curtis fired Portsmouth into the lead but Oxford have since hit back through Marcus Browne!

Watch all the action live on Sky Sports Football! 📺 pic.twitter.com/3TRokJjPjZ

In the other semi-final first leg, Paddy Madden and Glenn Whelan both featured in Fleetwood Town's 4-1 defeat to Wycombe Wanderers.

SEE ALSO: 'Gaelic Football, That Was Probably The Last Time I Hit One Like That'