Not the result Stephen Kenny would have been hoping for.

Ireland have fallen to a 1-0 defeat to Finland in the new Ireland manager's first game in charge at home.

It was a lacklustre performance, especially in an attacking sense. They did threaten on a couple of occasions late on, but ultimately they didn't really come all that close.

One point from these two games is not what we wanted. Here's how we rated the performances.

Pulled off a huge save to deny Pukki in a one-on-one inside the first ten minutes, the only real save he was asked to make in the opening period.

Despite getting forward with more regularity than we saw in Sofia, Doherty still didn't impact the game much in attack.

He was fairly solid defensively, but he has still yet to shine in an Ireland shirt the way we would have hoped for. 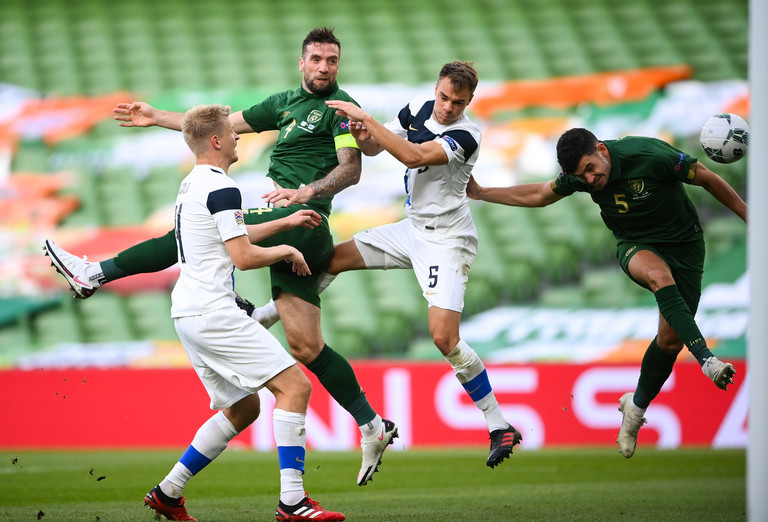 Made a couple of vital defensive interceptions in the first half, even if he was caught napping for Pukki's chance. That was his only lapse, however, with Duffy putting in an exemplary performance at the back in the first 45 minutes.

Questions could perhaps be asked for the Finland goal, but it was a stray pass from his teammate that moved Duffy out of position. He will be pleased with his performance after a shaky outing in midweek, although he will be disappointed to miss that chance late on.

Egan was asked few defensive questions, with Duffy cleaning up on the occasions that Finland did threaten.

He put in a lovely challenge to stop Teemu Pukki in the second half, but couldn't quite have the influence on the ball that he managed in Bulgaria.

Got on a lot of ball in the opening period, although the Finns seemed to have Aaron Connolly well marshalled ahead of him.

Had a couple of opportunities to put in crosses, but couldn't pick out a teammate. He was beaten at the far post for the goal but had been put in a very difficult position. 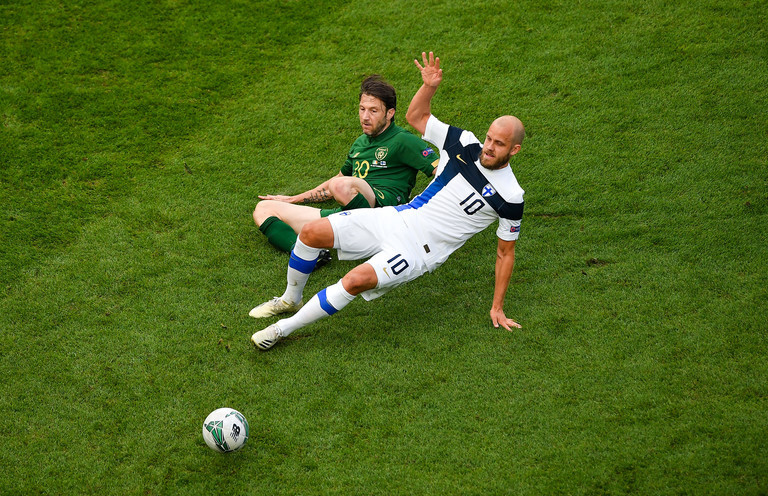 You could hear how vocal Arter was with the lack of a crowd, consistently showing for the ball in a manner we didn't really see from James McCarthy against Bulgaria.

He put in a couple of big challenges and moved the ball quickly throughout. The Bournemouth man also had a couple of testing efforts at the opposition goal. He was probably Ireland's best performer and should now be the first choice holding midfielder heading into next month's internationals.

Brought incredible energy to the Irish midfield early on, covering every blade of grass. He hassled and harried the opposition whenever they were on the ball and himself hit a cross-field pass to Matt Doherty in the opening half that really caught the eye.

He didn't quite have the same influence in the second half, with fitness perhaps playing a part this early in the season. Still a very strong debut for the 21-year old.

Brady was the weakest member of the midfield, giving the ball away cheaply in promising positions on a number of occasions. He also slowed the game down too often, taking too much out of the ball.

He was very poor for the Finland goal, poking the ball right into the patch of the Finnish attacker. With his set-pieces also failing to shine, this was a real disappointment after an excellent cameo earlier in the week.

O'Dowda looked dangerous in the opening ten minutes but failed to push on after that.

He came close with a shot that curled beyond the far post in the second half, but injured himself in the process and was replaced by Callum Robinson.

Attacked the space between the centre backs and wing backs right from kick-off, running in behind as opposed to dropping deep as he was forced to do against the Bulgarians.

He continued to work hard throughout, be he was forced to drift out wide in search of the ball and got little joy through the middle. Replaced by David McGodlrick with 25 minutes to play. 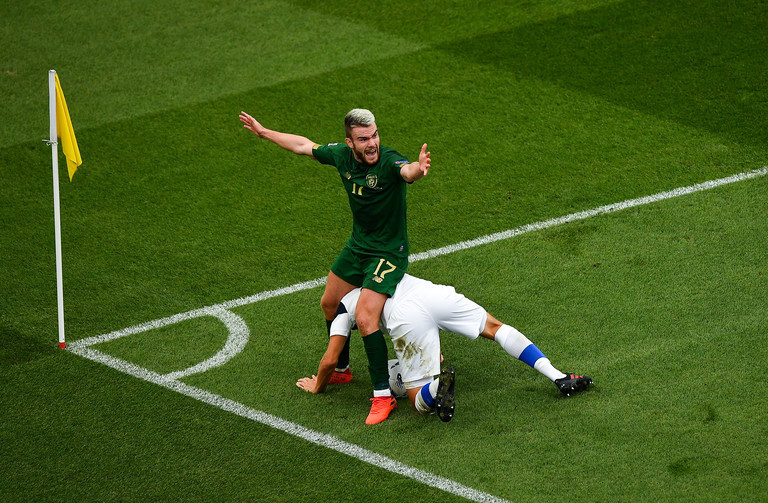 Didn't get much joy in the opening period, but came into the game a bit more in the second half. He had a couple of half chances, one which hit the side netting and another which ended in the goalkeeper saving a fairly tame effort.

Connolly became visibly frustrated as the game went on as he continued to get little service, although he was a little brighter in the second period.

Robinson injected some pace onto the right flank after his introduction, offering more of an outlet than O'Dowda had.

McGoldrick had a golden opportunity to score only a couple of minutes after coming on, but failed to get his shot away in time after Callum Robinson forced the turnover high up the pitch.

He was better equipped to hold the ball up than Idah, showing the type of nice touches we have become accustomed to seeing from him, forcing a good save from the Finland goalkeeper late on. It's a pity we couldn't see him from the start.

Seemed intent on swinging in a cross every time he got on the ball, despite the lack of numbers in the box. None of them really came close to connecting.

See Also: Stephen Kenny Continues To Be Defiant About Ireland's Style Of Play

Football
1 week ago
By Gary Connaughton
A Friendly Loss For Ireland Next Month Could Have Massive Repercussions
Football
2 weeks ago
By Balls Team
'Darren's An Experienced Goalkeeper, But He Doesn't Play Week In, Week Out'
Football
2 weeks ago
By Donny Mahoney
The Depressing Stat That Captures The Extent Of Ireland's Goalscoring Woes
Popular on Balls
Other Sports
6 hours ago
By Mark Farrelly
Weekend Sport Guide: What Times You Should Eat And Go To The Toilet
2