There were a couple of standout performances from U21 internationals in the lower leagues, but there was a worrying injury in the Premier League. 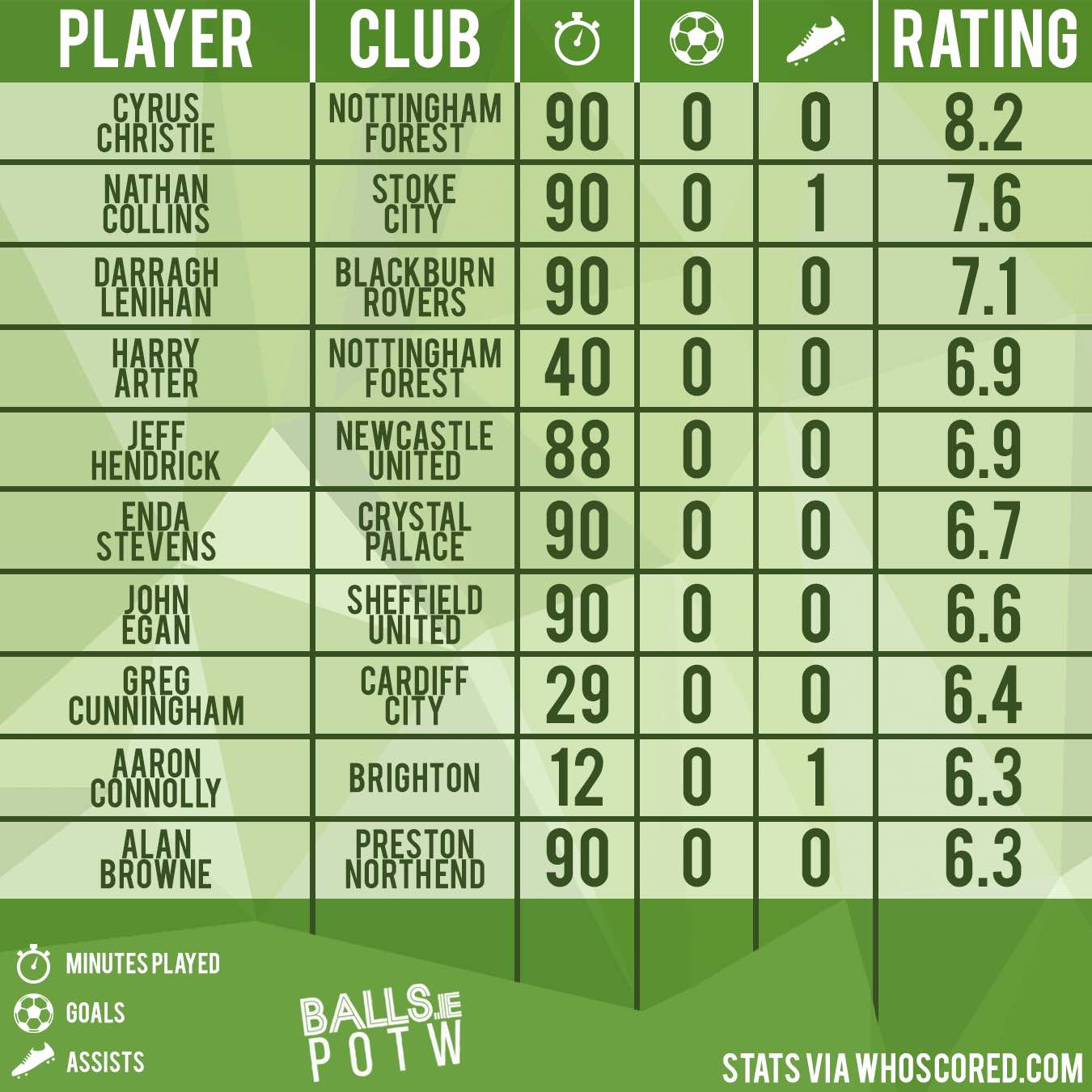 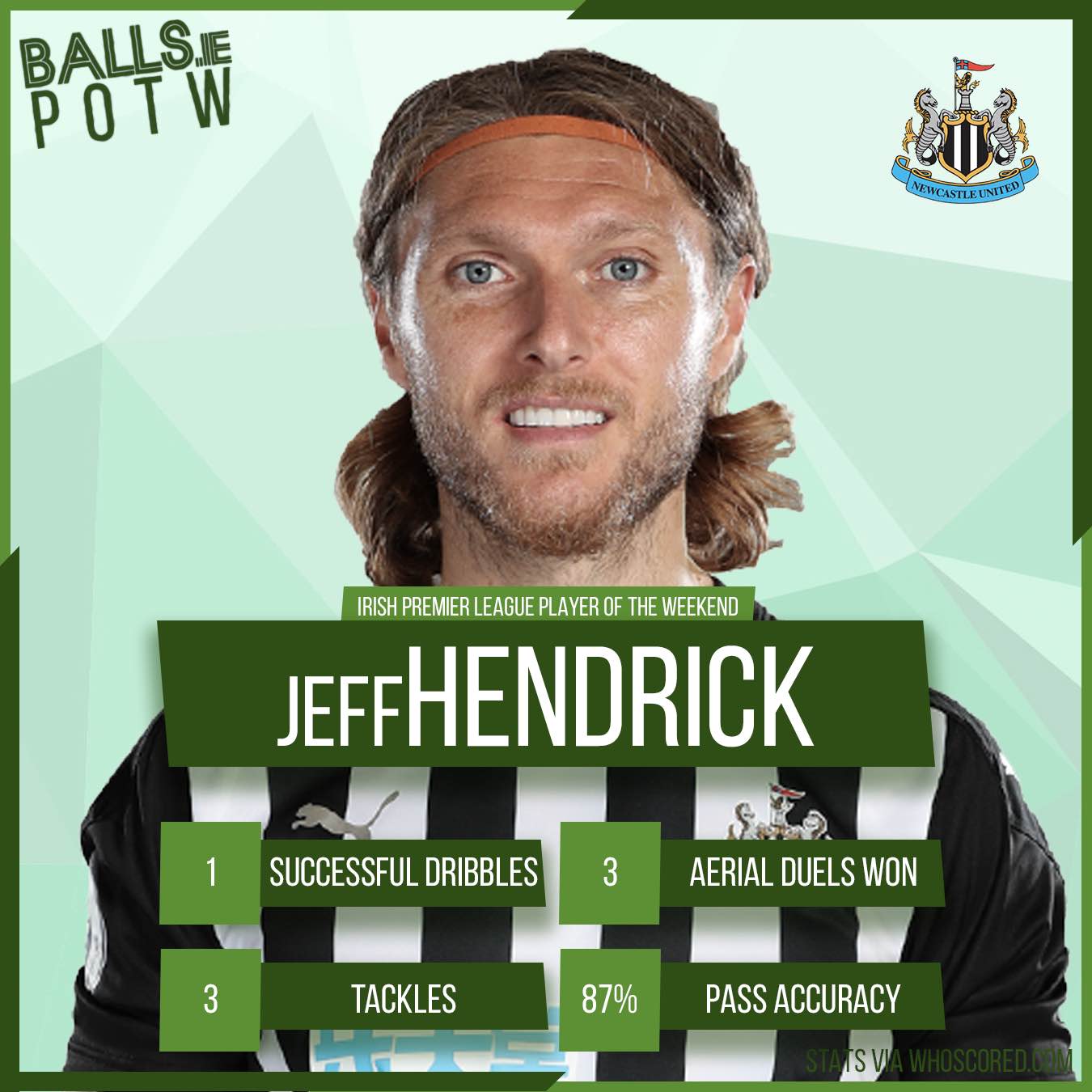 It wasn't a great week for Irish players in the Premier League. After a large number of Irishmen playing in the division each week, only seven featured over the weekend, five of whom started.

Those numbers could be boosted later this evening when West Brom and Burnley play this evening, but for now Jeff Hendrick was the highest rated Irish player.

The Newcastle United man played 88 minutes of his side's 4-1 home loss to Manchester United, although he was substituted just after Bruno Fernandes  gave the away side the lead.

Aaron Connolly assisted Brighton's late equaliser against Crystal Palace, although it's fair to say he was fairly fortunate after the ball rebounded off his heel into the path of Alexis Mac Allister.

There was also an injury blow in the form of Seamus Coleman. The Everton man missed the recent international window due to a hamstring issue, with the injury flaring up once again in the game against Liverpool. He was withdrawn on the half hour mark. 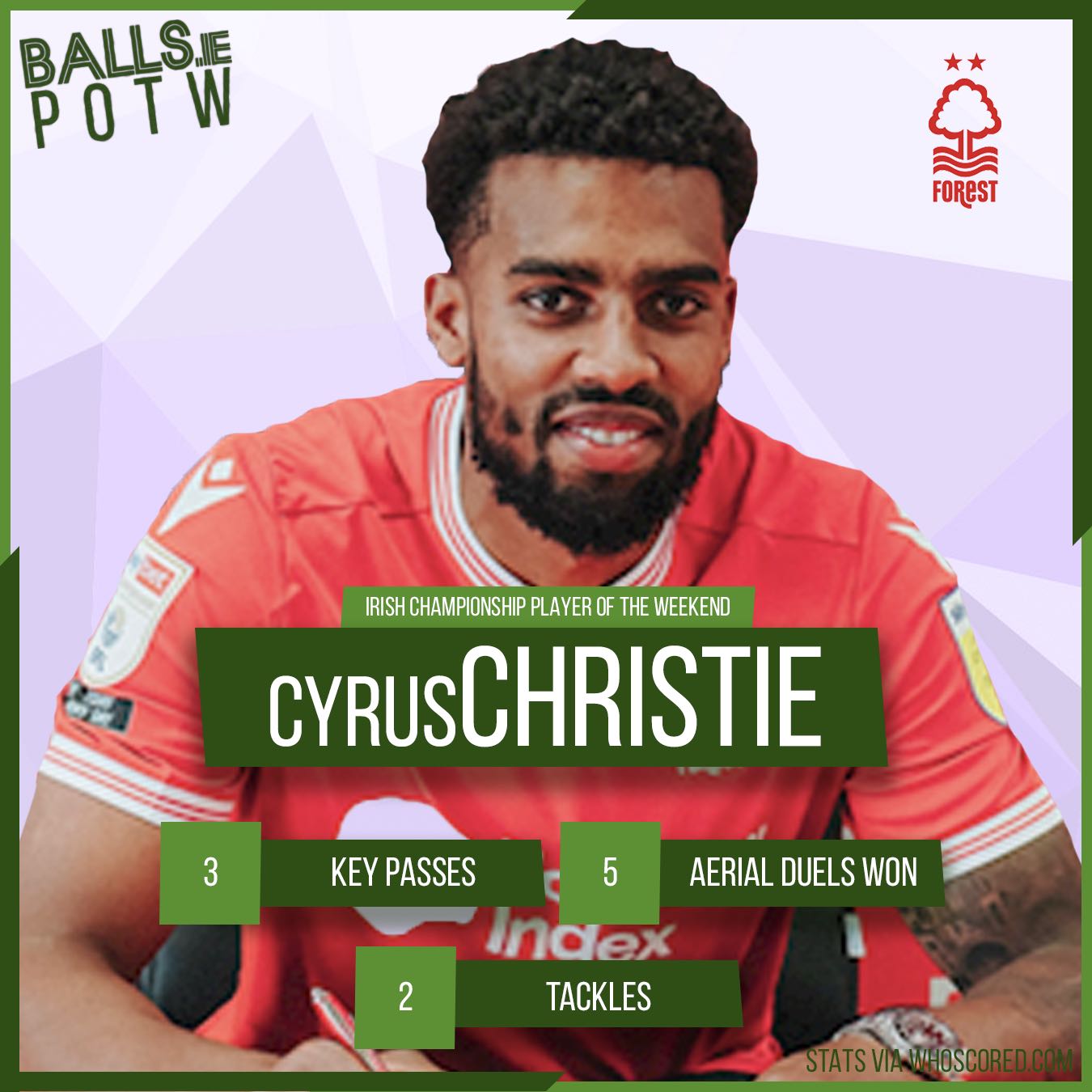 There were no Irish goalscorers in the Championship over the weekend, although a couple of players did put in very impressive performances.

The best of them came from Cyrus Christie, who was named man-of-the-match in Nottingham Forest's 1-0 win at Blackburn Rovers. He was included in the Champions Team of the Week.

Harry Arter came off the bench after being forced to withdraw from the recent Ireland squad due to injury.

Darragh Lenihan also bounced back from his recent injury issues to put in a solid performance in that game despite the loss.

Nathan Collins put in a cracking display, with the 19-year old centre back playing the full 90 minutes and assisting a goal in Stoke City's 2-0 victory at Luton Town.

The Leixlip native is highly regarded at the club, captaining them on a number of occasions last season despite his lack of first team experience.

Jason Knight, Adam Idah, Sean Maguire, and Alan Browne all started for their clubs after featuring for Ireland during the international break. 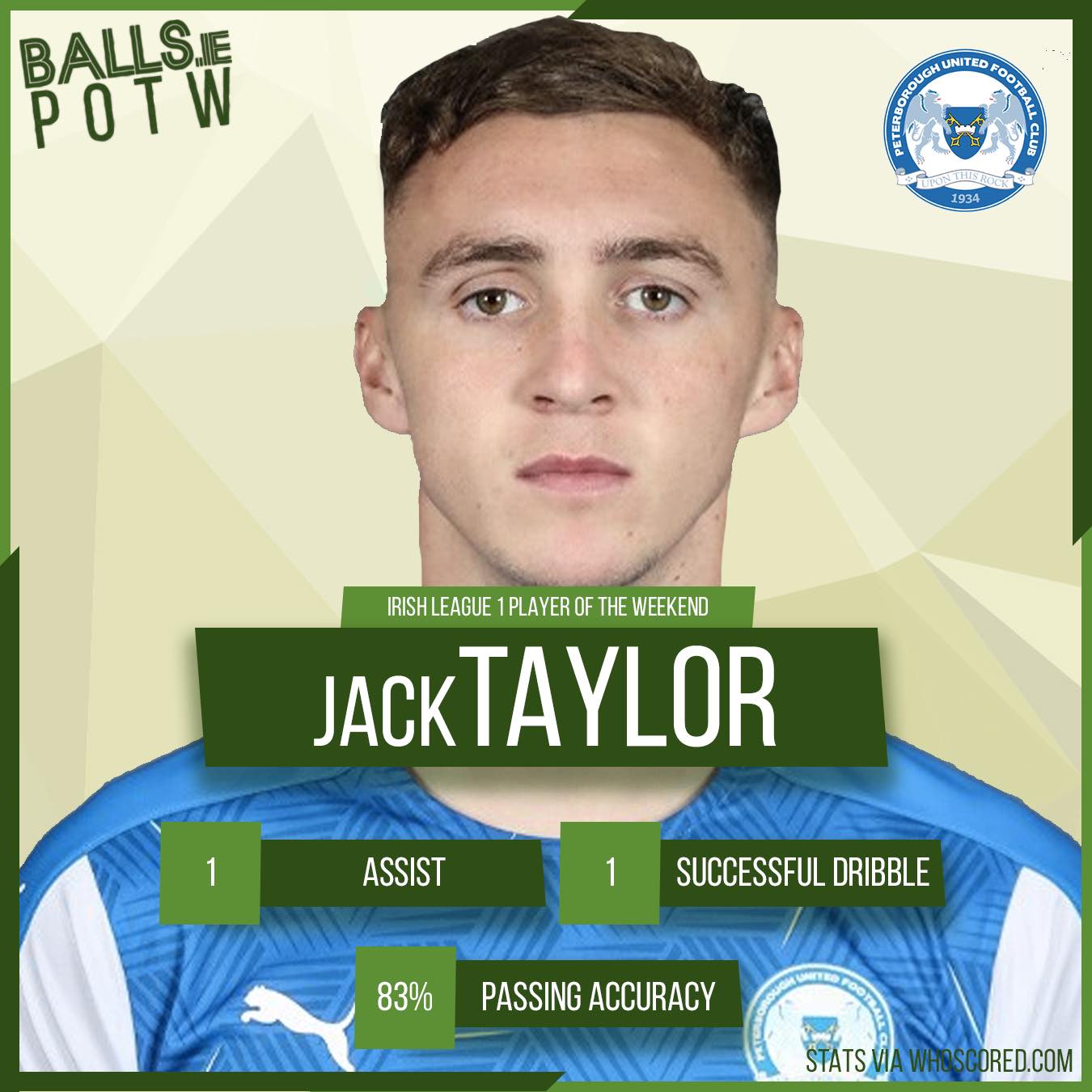 22-year old Jack Taylor was the standout Irish performer in League One, producing this cracking assist in Peterborough's 2-0 win over Oxford United.

The midfielder has been a regular in the Ireland U21 squad in recent times, winning six caps since June of 2019. He moved to his current club from Barnet in January for a fee of around £500,000, which could eventually rise to £1million.

Alan Judge was also amongst the assists, shining in an unfamiliar striker role during Ipswich Town's 2-0 win over Accrington Stanley.

Rochdale continued to depend heavily on Irishmen at the back with Gavin Bazunu, Paul McShane, Jimmy Keohane, and Eoghan O'Connell all starting their 3-0 loss to Hull City. 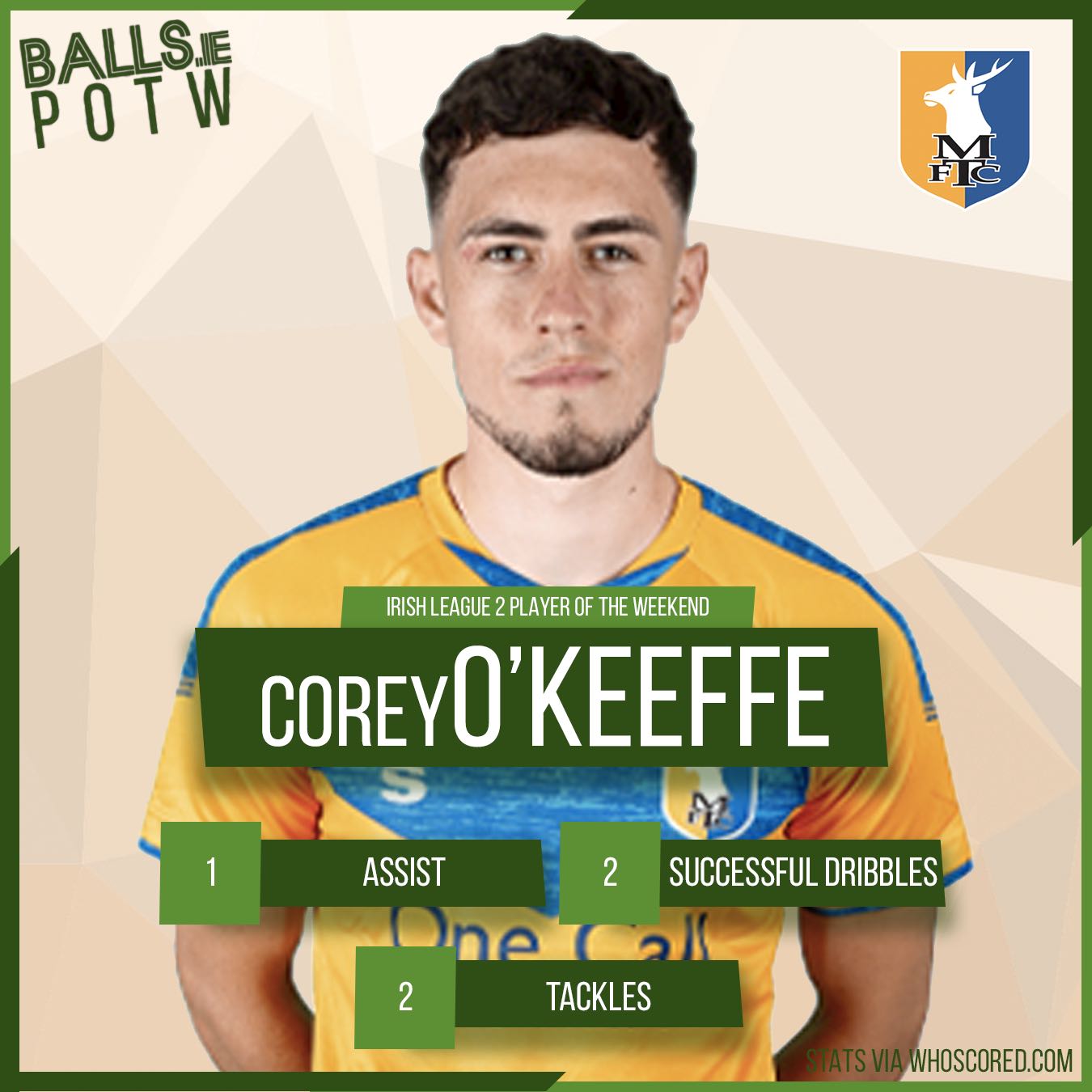 Conor Wilkinson was the only Irish player to score in the top four divisions of English football over the weekend, with the 25-year old scoring the opening goal in Leyton Orient's loss to Grimsby Town.

The top Irish performer in League Two was Mansfield Town's Corey O'Keefe, who registered an assist in his side's 3-1 loss at home to Bradford City.

Born in Birmingham, 22-year old O'Keefe has represented Ireland up as far as U19 level.

Bradford City defender Anthony O'Connor impressed in that one, earning a place in the League Two Team of the Week in the process.

Powered by @WhoScored ratings, it's time for your #SkyBetLeagueTwo Team of the Week! 🔋#EFL | #TOTW pic.twitter.com/ARR8I5QcJB

Recent Ireland U21 call-up Joshua Kayode also continued his strong form at Carlisle United in their 3-2 win over Colchester. The forward, who is on loan from Rotherham, was part of Jim Crawford's squad for the recent qualifier against Italy. 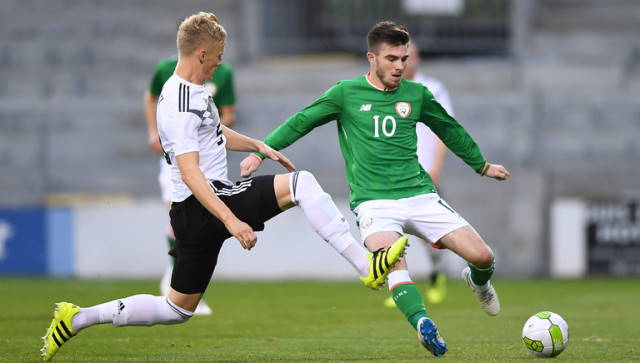