With the Euro 2020 play-offs quickly approaching, the form of our internationals is as important as ever. A number of players have come into some strong form in recent times, which is a good sign for Mick McCarthy.

Here's how they got on over the weekend:

Ciaran Clark started for Newcastle in their lacklustre home draw against Norwich City, with the defender performing well. He played a major part in keeping the opposition attack at bay with seven clearances and goal line clearance, earning an 8/10 ratings from Chronicle Live as a result.

James McCarthy was in the Crystal Palace midfield as they suffered a 1-0 defeat at home to Sheffield United. It wasn't his best performance, getting 5/10 from Football London.

Both John Egan and Enda Stevens were in the opposition side, with the pair performing very well. Stevens was given a 7/10 by the Sheffield Star, with Egan given 8/10.

The former Brentford defender has been hugely impressive in his debut Premier League season, winning more aerial duels in his own box than any other player in the division so far:

Most Aerial Duels won in own penalty box

This is one stat that is sure to please Mick McCarthy, with the Ireland manager placing a major emphasis on defending the penalty area. It is also a testament to the form Egan has been in this season.

Shane Long started up front in Southampton's 4-0 loss to Liverpool. Despite the heavy defeat, Saints Marching were impressed with his performance and recent form in general:

Was his usual self, running hard and winning the ball in the air... Has formed a quality partnership with Danny Ings, and against a lesser opponent he may have found the back of the net (7/10).

Michael Obafemi played 30 minutes off the bench but didn't make much impact.

Wolves played out a reasonably uneventful 0-0 draw at Old Trafford, with Matt Doherty resuming his role as right wingback. He put in an 'improved' performance according to the Express & Star, who gave him a 7/10.

Jeff Hendrick started on the right of midfield in Burnley's 0-0 draw with Arsenal, missing a golden opportunity to seal all three points for the home side. He was rated at 5/10 by The Mirror.

In the Championship, James McClean started on the left wing for Stoke in their heavy 4-0 defeat at Derby. He was moved to left back in the second half, but did little stop the opposition in a 5/10 display according to the Stoke Sentinel.

Darragh Lenihan put in a strong showing in Blackburn's 1-1 draw with Middlesbrough, earning a 7/10 from Lancs Live as he captained the side. 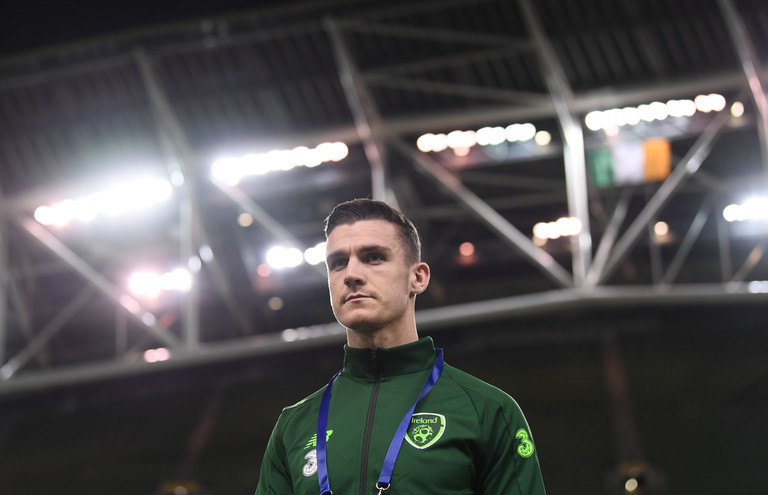 Millwall drew 1-1 at Sheffield Wednesday, with Shaun Williams starting and Jayson Molumby coming off the bench.

Cyrus Christie may not have gotten his move to Roma, but he was in the Fulham team for their 3-2 win over Huddersfield at the weekend. He assisted his side's second goal, getting a 7/10 from West London Sport.

Josh Cullen continued his recovery from injury, starting Charlton's 2-1 win over Barnsley. He put in a big performance, getting an 8/10 from News Shopper:

Dynamo in midfield and sets the tempo. His set-pieces caused all sorts of problems throughout and added a swagger to a side that lacked confidence during an injury crisis.

Such a big player for The Valley outfit.

Callum Robinson made his debut for West Brom in the 2-0 win over Luton Town. He had a huge impact on the game, with his cross forcing the opening goal. He got an 8/10 from the Express & Star, while manager Slavan Bilic was hugely impressed with what he saw from the Ireland forward:

I was very impressed with his first game. He is present, he is dangerous and he fits in with the other players.

We knew who we were getting. He’s exactly the type of player that we wanted.

Dara O'Shea started that game in the less familiar position of right back, getting a 7/10 after a good display.

It wasn't a great day for the visitors, who started with James Collins up front. He captained the side and had a goal disallowed for offside, being rated at 6/10 by Luton Today.

Preston drew 1-1 with Swansea to stay within touching distance of the play-offs. Alan Browne put in a 6/10 display in midfield, while Sean Maguire only managed five minutes off the bench according to the Lancashire Evening Post.

Conor Masterson continued his run in the QPR team during the 1-0 defeat. It was another good performance from the defender despite the loss, who had quickly become an important player in recent weeks. He was one of only two players to be rated at 7/10 by West London Sport.