Football
May 6, 2019
By Gary Connaughton

As the season comes to an end, our internationals keep performing. The weekend's action featured typically outstanding performances from the likes of Matt Doherty and Shane Duffy, but it was a young Irish goalkeeper who stole the headlines.

Mark Travers was named man of the match on his Bournemouth debut, leading his side to a 1-0 win over Tottenham. Not a bad start to life in the Premier League, eh?

Seamus Coleman grabbed his second goal of the season, as Everton continued their good run of form with a 2-0 win over Burnley. It may have been a tap-in, but his overall performance earned an 8/10 from the Liverpool Echo:

Carried on his brilliant form over the last few weeks by nodding Everton's second goal home, holding his run well in the process. His defensive contribution throughout the match was stellar and his work getting forward was also key, especially in the first half. If anyone deserved a goal, it was him.

Robbie Brady started the game for Burnley, while Jeff Hendrick came off the bench.

Mark Travers was perhaps the story of the weekend in the Premier League, earning man of the match honours on his debut against Spurs. The 19-year old goalkeeper was sensational in keeping the Champions League semi-finalists at bay, with Bournemouth securing a late 1-0 win. 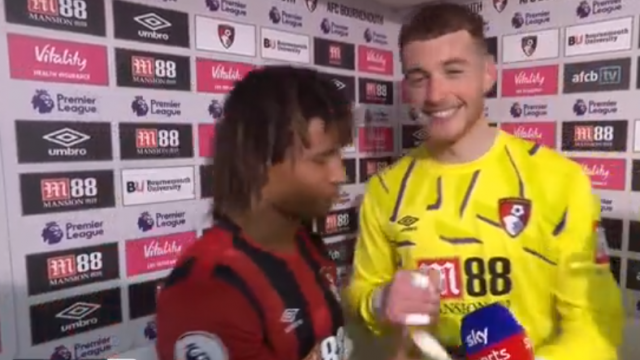 He was given a 9/10 by The Independent, and the future of Irish goalkeeping certainly looks in safe hands.

Wolves confirmed a seventh-placed finish after their 1-0 win over Fulham, with Matt Doherty assisting on Leander Dendoncker's goal. It was his eighth assist of the season, to go along with eight goals. It was another star showing from the right back, who earned an 8/10 from the Express & Star.

Cyrus Christie started in a back three for Fulham, getting a 5/10 from 90min.com.

Shane Long started for Southampton at West Ham, but was unable to continue his hot streak as they fell to a 3-0 defeat. He was given a 6/10 by Saintsmarching.com after a fairly quiet afternoon.

Brighton held Arsenal to a 1-1 draw at The Emirates, with Shane Duffy starring at the back. He was rated at 8/10 by the Brighton & Hove Independent, putting in another 'aerially dominant' display.

Derby County secured a spot in the play-offs after a 3-1 win over West Brom, with Richard Keogh captaining the side and getting an 8/10 from the Derby Telegraph.

That earned him a 7/10 from The Star, who were impressed with his play going forward. John Egan and David McGoldrick also started the game, with both players earning 6/10. We look forward to seeing those boys in the Premier League next season.

Sean Maguire, Alan Browne and Callum Robinson all started as Preston fell to a 3-0 defeat at Brentford, ending their season on a disappointing note. Browne and Maguire were given 6/10 by Lancs Live, while Robinson got 5/10.

Alan Judge grabbed an assist as Ipswich ended their season with a 3-2 win over Leeds United, earning a 6/10 from the East Anglian Daily Times.

Blackburn drew 2-2 with Swansea City, with Darragh Lenihan opening the scoring in the game. He was partnered at the back by Derrick Williams.

Middlesbrough came away with a 2-1 win at Rotherham, but Darren Randolph's side still fell short of making the play-offs. It was a strong performance from the Ireland goalkeeper, who got an 8/10 from the Teeside Gazette.

Glenn Whelan and Conor Hourihane started for Aston Villa as they lost 2-1 at home to Norwich City. Hourihane grabbed an assist, and put in a strong passing display accruing to the Birmingham Mail (7/10):

Put so many dangerous passes into the box and was a threat every time he crossed the ball. Set up Kodjia for his equaliser and went close himself with a first-half volley.

Whelan was give 6.5/10 for a typically battling display in the middle third.

Football
1 day ago
By Gary Connaughton
Quiz: Name The Top 19/20 Premier League Goalscorer At Every Age
Previous Next