In Stats: How Irish Players Performed In This Season's Premier League

The 2018-19 English Premier League season is over and it really can't be considered a vintage season for players from the Republic of Ireland.

15 players made an appearance in the league, with another three appearing in matchday squads (but didn't play).

Matt Doherty was ever-present for Wolves appearing in all 38 games (including a very impressive 35 starts).  Only six players were on the pitch for more than 1,500 minutes in total.

Top scorers with five were striker Shane Long and centre half Shane Duffy. Doherty (five) and Seamus Coleman (two) were the only players with more than one assist.

There is some hope for the future with four players under the age of 20 appearing in squads. Mark Travers, who made two late starts for Bournemouth, joined full international Michael Obafemi in the short list of Irish teenage Premier League footballers. Conor Coventry and Jayson Moloumby nearly joined them late on in the season.

Here are statistics for all 18 Republic of Ireland players to feature in a Premier League matchday squad listed by minutes played. 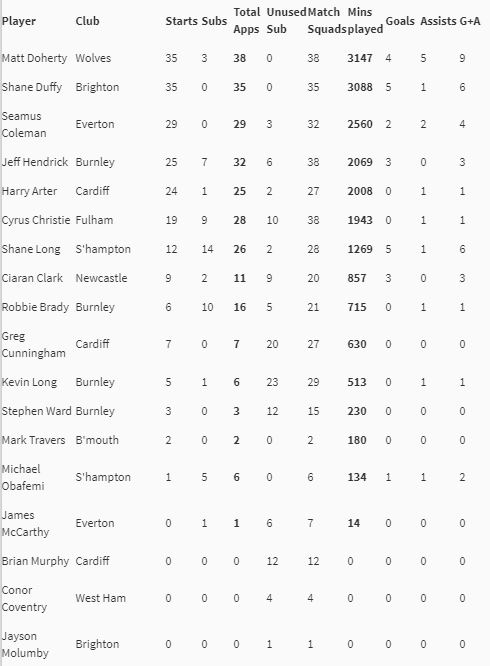 Some other players such as Brighton's Aaron Connolly and Liverpool's Caoimhin Kelleher appeared in squads in other competitions but we only include the Premier League here.