A lack of domestic development supplemented by eligible recruits, the essential tale of Irish football. It is time to ask is either strategy being appropriately implemented.

“Liam Brady rang Kevin’s. He wanted to know what a kid from Kevin’s was doing moving to London and why he hadn’t come near Arsenal,” McCracken explains to Balls.ie.

It had not taken long for the 12-year-old talented Dubliner to attract attention. Shortly after his family emigrated to the English capital, he began playing schoolboy football. Before long London’s professional clubs would all come calling. It took one trial game for West Ham to offer to extend his stint to six-weeks.

After his second game, they wanted to make it permanent. The opposition that he had faced, Fulham, also reached out.

The phone at St Kevin’s began to ring relentlessly. Fulham enquired about compensation; they were told to deal directly with the boy’s family. The Arsenal invitation arrived, and a four-goal debut convinced them to make an offer. At the same time, Chelsea declared their interest.

“We did call Arsenal back and said, 'Listen, we might try Chelsea,’” recalls Reginald Okoflex Inya, Armstrong’s father.

“They said they would come to the house. Then I said to his Mum ‘I love Arsenal, I supported them as a child, and it reminds me of St. Kevins,' and we talked to him. All he wanted to do is play football. They actually signed the contract in the living room of the house. The rest is history.”

Reginald Okoflex Inya is a renowned figure in North inner-city Dublin. After emigrating to Ireland over two decades ago, he studied at Dublin City University and Dublin Institute of Technology. Soon he helped establish the Migrant Family Support Services and Community Foundation for Ireland programme for which he was awarded numerous UN and Social Entrepreneur Ireland accolades.

Describing himself as a proud Irish-Nigerian and 'one global village' advocate, it is through this lens which one must view Okoflex’s upbringing:

I was always looking forward to the time when my son could be a symbol of a different Ireland. His age-group and generation, a mixed raced kid from different parts, being successful. If you see African people on a Dublin street, people still associate that with an asylum seeker. Not a professional, not a pro football player or a rugby player.

But in time we will respect a black man for who he is, not what he looks like. Knowing he can be a doctor, or a TD, or in the four courts deciding cases. He could be a policy-maker in the Irish system. There is a moment when we will get there.

Last summer, Okoflex turned down a new Arsenal deal in favour of Celtic. Manager Brendan Rodgers had compared his situation to Raheem Sterling’s and Okoflex declared it his goal to make his debut before turning 17.

Roll forward to last Sunday; his father watched proudly as his son was included in the senior squad for Celtic’s SPL contest against Kilmarnock.

His prowess attracted the attention of various professional clubs and eventually an international underage side but remarkably, it was not Ireland.

Due to emigrating and living in London, Okoflex is eligible to play for England as well as Ireland, his country of birth and Nigeria, where his father is from.

“To be honest, he was first called up and played with England before Ireland even called him. He already played for England, then Ireland called him up. He is still playing with the two.”

The FAI did wake up and call in Armstrong subsequent to his initial England appearances, and he has represented both at U15 and U16 level.

Balls.ie understand that Nigeria have also been in contact with an invitation but thus far, Armstrong has not accepted it. His father is reluctant to dwell on international teams, with their focus firmly on his own footballing development.

“We just want to see how his future works out. He has a chance to play. You know what? Anything about international is a pure longshot right now to even think about.”

Armstrong Okoflex is an Irish-born prospect who was called up by a different nation before Ireland. As it turns out, he wasn’t the only one. 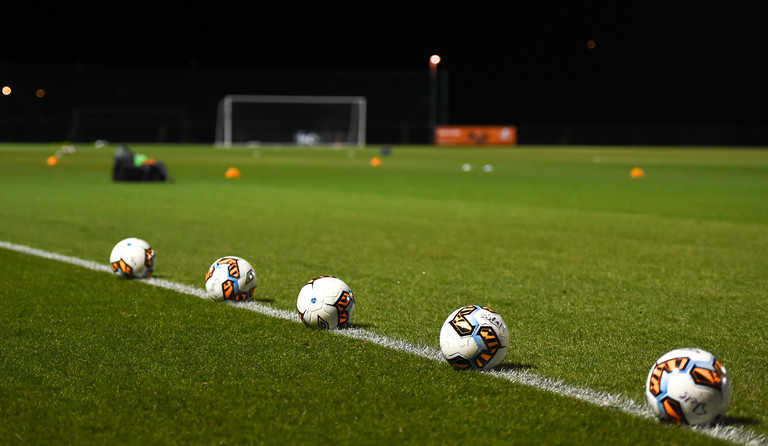 “Darragh is happy. He’s in with the North U17 squad,” says St. Patrick’s Athletic director of football Ger O’Brien.

Darragh Burns initially played for Bohemians U15s before moving to the Inchicore club. At the time, both St. Pats and coaches from the Dublin schoolboys league contacted the FAI about the ability of the technical midfielder and recommended his inclusion. He was not selected.

“His Dad is from Northern Ireland, he just wasn’t getting called up,” O’Brien explains.

Then an invite to link up with the Northern Ireland U17s was extended and accepted.

Days after his impressive involvement with Northern Ireland, Burns was also invited into the Republic of Ireland U17s squad. He made his debut off the bench against Turkey in a friendly at Tallaght Stadium and grabbed a goal and an assist a week later.

Then a choice had to be made, the player opted to continue with Northern Ireland.

As O'Brien details, there are implications to this.

That’s at any level. Look, Darragh is happy. He’s in the North squad. In fairness to Colin O’Brien, he came and met him. I let Colin explain his thinking for his plans for him, Darragh went away and decided he wanted to go North.

Saint Darragh Burns has been named in the Northern Ireland U17 squad for two friendly internationals against Greece this week. The games on Tuesday & Thursday are in preparation for the Euro Championship qualifiers next month 🔴⚪️⚽️ pic.twitter.com/jHratK8fYT

For football associations, recruitment and development go hand in hand. While the FAI has recently scaled back their UK-based scouting set-up as part of a ‘restructuring’, neighbouring countries have intensified their efforts.

It is a wave Martin O’Neill predicted in 2014 in relation to the English FA: “While the rules remain the same for us and them, there is very much a case of them not wanting young talent to disappear just under the radar. Whether they are actually going to use them or not, they want to make sure they have first call on them.”

With the Declan Rice clamour ringing in their ears, several English-born Irish underage players have recently been contacted by the FA. This includes Bolton’s Luca Connell and West Brom striker Louie Barry, who has now represented both Ireland and England at U16. 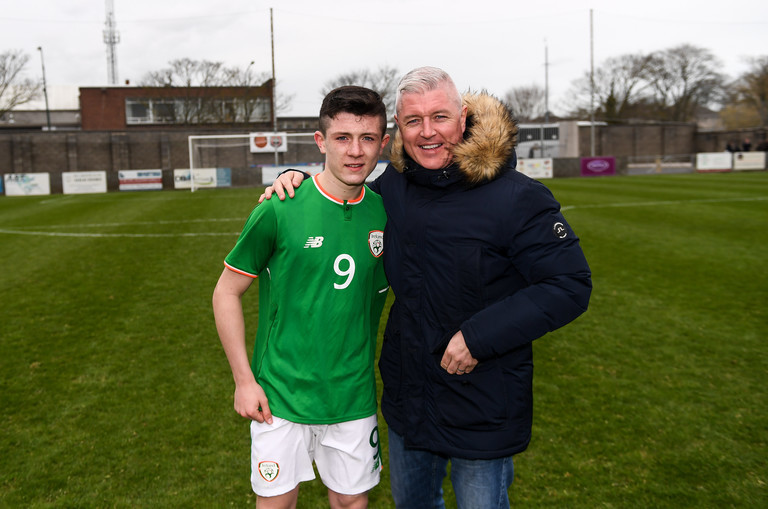 Former Republic of Ireland international Graham Kavanagh has witnessed this recruitment drive up close. Currently working as a coach with Middlesbrough and scout with Bristol City, Kavanagh’s 15-year-old son Calum was also recently approached by the English FA after impressing with Ireland’s underage sides.

Born in Cardiff but playing for Middlesbrough, Calum is yet another young prospect eligible for several different nations.

We got approached from the football club to say that the England scouts had been to watch Calum and they were keen to have him in. They felt they had seen good development in him. The club knew straight away in fairness that it wasn’t something I would entertain.

It got mentioned to me by the head of recruitment in the academy, Martin Carter. I just said ‘you done wisely not asking me because you know the answer.’ We did have a conversation with Calum to gauge his feeling, but I knew anyway. It was even just confidence-wise it, it could give him a boost that there are elite FA scouts watching- you are doing well.

"We had a conversation.  It didn’t come on his radar, he just said ‘no chance, I’m Irish.’"

Yet Kavanagh is wary of the process taking place in the UK: “With young players, England have cast the net out for an awful lot of players, hoping they are impressed by the set-up and the way they operate.”

One man who is keenly aware of the power the English FA now hold is Liam George. The former Irish youth international was an English-born kid who opted for Ireland. Now based in Luton, he is quick to stress the gulf in standards and acknowledges that while it certainly did not influence his decision in the modern-day game it can be a factor.

"England have just won the World Cup U17s and U20s. It is such a more attractive proposition any way you look at it apart from the fact, the most important fact, that I’m Irish." 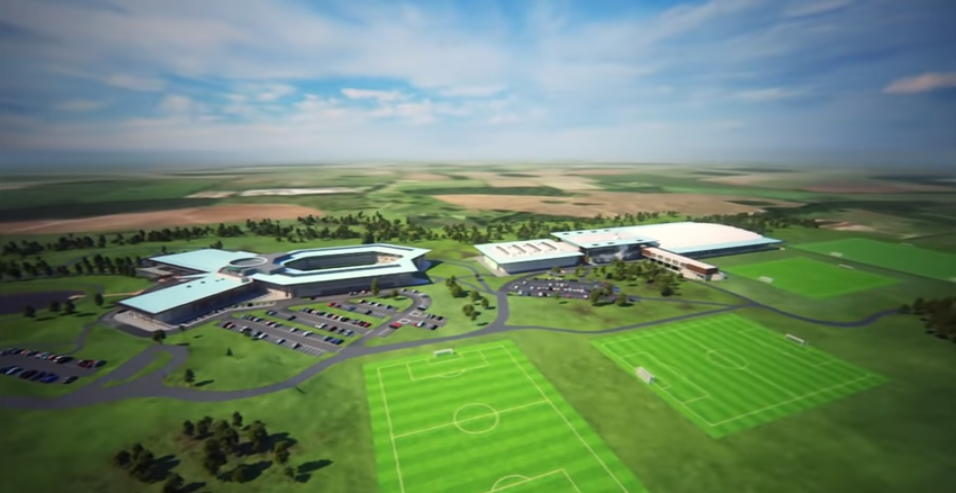 The English FA have got a far bigger reach than the FAI in regard to funding, their bottom line, their facilities, you only have to look at the gulf in facilities. Any of my involvement, we were at the AUL, at buildings that were not purpose-built for Irish football. We are doing favours and training places that we can use while we are about. The power of the English FA, just look at St. Georges Park.

It's a corporate giant.

Until recently, the national team has been able to overcome root problems with Irish football thanks to a contentious relationship with the 'granny rule.' Successful stints have always been supported by outside influences. The discovery and pursuit of eligible players has become policy.

Yet without sufficient development and recruitment, the risk of losing players is ever greater.

As a consequence of an intense UK focus, players like Seamus Coleman, Alan Browne and Sean Maguire who were based in Ireland were omitted from the U21 starting team in favour of English-born prospects. In the case of Coleman, he did not even make the squad.

None of the English-born players who started ahead of them went on to make a senior appearance.

A feature of recent U21 squads has been significant 'granny rule' influence, the question remains does this infatuation now come at the cost of home-grown development? The prospect of Irish-based players inclusion remains remote and logistically challenging, given League of Ireland matches are often fixed for the same day as U21 games.

Ultimately, when it comes to recruitment this is a new world with players increasingly eligible for more than one country. The task of competing with rival nations for top-class prospects is now a formidable one, and fixating on it comes at a cost.

Football
2 weeks ago
By Gary Connaughton
Could West Ham Starlet Be The Next Irish Player To Burst Onto The Scene?
Football
5 months ago
By Andrew Dempsey
West Ham's Irish Trio Score 5 Goals In U23s Hammering Of Arsenal
Football
1 year ago
By Sean Meehan
Here's The Reason Armstrong Okoflex Wore Airpods On The Celtic Bench
Previous Next

Football
2 weeks ago
By Gary Connaughton
Could West Ham Starlet Be The Next Irish Player To Burst Onto The Scene?
Football
5 months ago
By Andrew Dempsey
West Ham's Irish Trio Score 5 Goals In U23s Hammering Of Arsenal
Football
1 year ago
By Sean Meehan
Here's The Reason Armstrong Okoflex Wore Airpods On The Celtic Bench
Popular on Balls
Basketball
1 day ago
By Eoin Harrington
Kieran Donaghy And Tralee Warriors Claim National Basketball Cup Title In Tallaght
Football
1 day ago
By Gary Connaughton
Carragher Reveals Unhappy Instagram Message From Lionel Messi After MNF Comments
The Rewind
1 day ago
By Gary Connaughton
Quiz: From Which Irish County Did This Company/Product Originate?
Football
2 days ago
By Jonathan Byrne
Women Footballers Call Out 'Embarrassing' Sun 'Exclusive'