Ireland are not unfamiliar with a couple of eh, Danish pastings.

As grim as the 5-1 defeat in November was, it was at least unaccompanied with the final salty twist delivered by the RTE continuity announcer after the 4-1 defeat to the Danes in 1985. "And after the break, more comedy with Cheers".

That 4-1 defeat at Dalymount was the final game of the Eoin Hand era, and his talented squad were thrust to Jack Charlton and then, well, you know the rest.

32 years later, Denmark went a goal better in Dublin, but this time it wasn't accompanied by a change in manager for Ireland. Instead, via a flirtation with Stoke City, Martin O'Neill committed to a new contract with the FAI.

Last month's hideous 4-1 battering in Cardiff however, has put him under pressure to avoid having that contract broken. The fact that O'Neill was forced to answer questions about his job security ahead of Saturday's game with Denmark speaks volumes.

While a good result would be valuable to the Irish team, it looks necessary to O'Neill. In order to get it, here's the team and formation we think he should play. 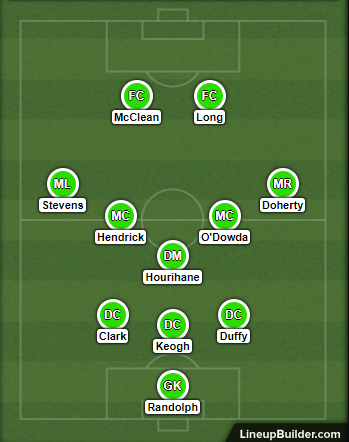 O'Neill experimented with three at the back in this year's friendlies, deploying it away to Turkey and at home to the United States. We saw it most recently away to Poland. While it hasn't exactly been a roaring success, given the players at our disposal it looks our best option.

The manager told the media on Tuesday that they have been working at system built on a back three, and given that Ireland's most in-form player is a wing-back, our relatively plentiful supply of defenders and that other systems hopelessly isolate the striker, it looks the best bet.

Keogh played reasonably well in Poland and is a more experienced option than either Kevin Long or John Egan (who may once again audaciously wear the No.10 jersey). Clark is still somewhat unconvincing but he probably still deserves his place, and Duffy is an automatic starter as he is, er, one of our most potent attacking threats.

This game will surely mark the day that Matt Doherty plays a competitive game for Ireland, and tie him down for good. (As unlikely as it seems, Doherty is still technically eligible to play for Holland). He has been superb for Wolves in exactly this position in the Premier League this season, and his form and experience in that position should nudge out O'Neill favourite Cyrus Christie.

James McClean has been used as a left wing-back by O'Neill - most recently against the United States - but his attacking edge is blunted in that position: he lacks the guile to make a true impact from that role and is much more effective closer to goal.

There may be a temptation on O'Neill's part to try either Doherty or Christie on the left (Doherty has played there for Wolves but is less effective) but we think Enda Stevens is worth a shot: he has been playing in that position in a Sheffield United team flying high in the Championship.

Martin O'Neill has confirmed that Jeff Hendrick will definitely start, and while he has largely disappointed since the Euros, we feel that playing slightly further forward rather in a flat midfield two (as he did in Wales) might suit his game better. O'Dowda was impressive against Poland but peripheral against Wales - he is much better centrally.

Hourihane, in spite of a very poor performance in Cardiff, should probably just keep his spot ahead of Millwall's Shaun Williams.

Long hasn't scored for Ireland in more than two years, and Martin O'Neill this week admitted that he is not a prolific goalscorer. He will likely keep his spot, however, with Seani Maguire unfit to start. James McClean is one of the few players we can rely on to score, and has to play. Callum Robinson, Aiden O'Brien, and Maguire offer hope from the bench.