In a week of much doom and gloom - the Republic of Ireland women's national team has brought some much-needed distraction.

An 11-0 win against Georgia on Tuesday was the biggest win of any Irish team - men or women. The win has cemented that night in the history books.

After such a dominant win - it's easy to think this group of women are full professionals and spend every minute of their days preparing for these matches.

However, the team's appearance on Friday night's Late Late Show paints the picture of quite the opposite, or at least for a portion of the squad.

No senior Irish team, men or women, had ever scored double figures

Shelbourne's Ciara Grant was one of the attendees and stepped away from the game a few years ago to pursue her medical training.

"I took a step away, did my internship in Beaumont with a lot of my classmates and stuff," she said. "I had a lovely job at the RCSI, Royal College of Surgeons, where I was training and teaching undergrad students."

"I really enjoyed it but it also allowed me to play football 9 to 5, no weekends. But then when the pandemic struck. Donegal is kind of on the edge of the world as we all know."

Grant, like many others, moved back home to help out her local hospital during the pandemic. "I just knew they would be stuck for staff."

"So I spoke to RCSI and they said I could go home for I think about 12 or 13 weeks and work there in a hospital to help out."

Galway WFC's Savannah McCarthy juggles her sporting life with work in the hospitality industry. She makes the commute to Galway from Kerry several nights a week.

"I work in a local restaurant in Listowel where I'm originally from. I work there full-time and also play for Galway Women's FC."

"It's a case of like my work kind of works around me because obviously, football is my number one thing. They support me in my decision."

It's far from your typical work week for McCarthy. Her call-up to the Republic of Ireland setup has stretched her days even more.

"I drive to Galway three nights a week. Then on a Saturday, we could be anywhere, we could be in Dublin, Wexford, depending on where the game is. It's really busy but I love it."

"Now I'm training with the (Listowel Celtic) boys team ... just for an extra session. I'm in with the boy's senior team once, twice a week."

Another strong theme throughout the squad is family. Given the semi-professional nature of many players - family has played a big role in their rise to the top.

Savannah McCarthy understands strong family values having grown up in the travelling community. "My family are my number one supporters."

"They go everywhere with me. They're at every single game. Especially my dad, since I was a kid, he just drives me everywhere. Literally watches my training sessions. I'm like 'Dad go on away home'!"

A fantastic story to emerge this week was the debut goal of Cork woman Saoirse Noonan - with brother Eóin on the end of the Sportsfile lens to capture the moment.

"He's at every game. So I think to catch the moment - especially that one. To have him in the corner and run in his direction."

| @saoirse_noonan was lucky to have her brother @SportsfileEoin on hand to capture her first international goal.... she does wonder what his colleague @sportsfilesteve thinks about it however #latelateshow #rtesoccer pic.twitter.com/q4Db5WqoIL

Denise O'Sullivan is one of the stars of the team and she too described how much it meant to her to share the win with those close to her.

"To get one goal for your country is fantastic but to get three on the same night is an honour. To have my family there watching in the crowd was something special."

O'Sullivan was the only hattrick hero on the night so rightfully kept the match ball, but it didn't end up in her hands when she went home.

"I kept the ball. My nephew was in the crowd, Jack, he absolutely loves football. Went straight over to him and gave it to him. His mam sent me a picture that night - he was sleeping with the ball next to him as well!"

The Republic of Ireland team will be taking a deserved break before making the trip to Sweden for their next World Cup qualifying game.

Many Irish football fans will look back on this week with fondness. Savannah McCarthy aptly summed up the effect she hopes it has on others.

"My nieces and nephews, hopefully just one day they can do the same thing that I'm doing." 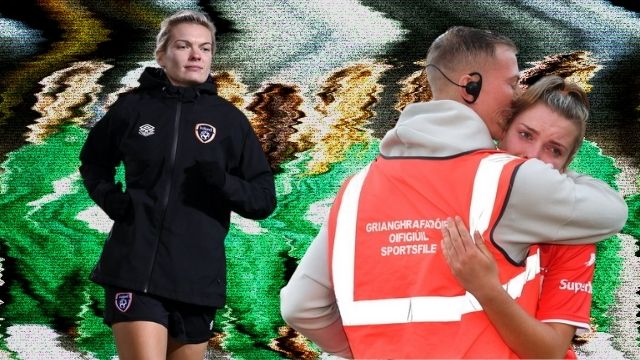