The Three Irish Footballers Who Played In The Bundesliga

Of all the big leagues in Europe, Irish football has left the smallest imprint on the Bundesliga.

While rumours of others joining them pop up every now and then, to date only three Irish men have played in the German top tier, and none of them for more than one season.

The three had different routes to the Bundesliga; one was an international before he moved, one was born in Germany and another remained virtually unknown until recently.

These are the Irish men who have played in the Bundesliga.

Noel Campbell came from a strong Dublin footballing family. Aged only 17 he was playing for St Patrick's Athletic in the League of Ireland alongside his brother Jimmy. In his first season he helped the Saints reach the 1967 FAI Cup final, losing to Shamrock Rovers in the first game televised live by RTE.

The following season he got his first taste of European football when the Saints played Girondins de Bordeaux in the Inter-cities Fairs Cup. Campbell scored twice in Bordeaux but the Saints lost home and away. By now one of the most highly rated players in Ireland, Campbell remained with the Saints and was their top scorer in 1969 and 1970.

At the end of the 1971 season,  the 21-year-old received his first call up to the Irish national team. He was the only the 6th St Pats player to play for Ireland (and there have been none since) when he started in the 4-1 European Nations Cup qualifier defeat to Austria in Lansdowne Road.

That summer the great Shels striker Ben Hannigan was looking for a move to full time football and went on trials throughout Europe. He was offered a deal with Fortuna Koln in the second tier in Germany, but they wanted another Irish player: Noel Campbell.

Hannigan didn't play a game in Germany before returning to Dublin but Campbell quickly settled into life in Cologne. He told the Irish Examiner in 2014:

I was very young. But I was an old man before I ever grew up. I lived in England for a while. I was on my own and I went to school there. So, I was an old hand as far as living somewhere else — that didn’t bother me. In Germany, the language was a bit of a barrier but I got over that fairly quickly.

Campbell made an immediate impact in Germany scoring twice for Fortuna in his first season and also playing his part in a shock 2-1 win over Bayern Munich in the German Cup (Bayern would win the second leg 6-0).

The second season was even better with Fortuna Koln finishing second in their league and qualifying for the Bundesliga play offs. There they played right games, winning six of them to win promotion to the Bundesliga (with Campbell scoring twice against Karlsruher along the way).

Campbell retained his place in the side upon promotion and became the first Irishman to play in the Bundesliga as Fortuna Koln opened the 1973/74 season away to Borussia Mönchengladbach (losing 3-1).

See if you can spot his distinctive big red mop of hair in these grainy highlights.

After a defeat to Bayern, and a home draw with Fortuna Dusseldorff, Koln earned their first win beating fellow promoted side Rot-Weiss Essen 2-0 away.

Unfortunately despite winning two of their last four games against Stuttgart and Hamburg, Koln finished second from bottom and were relegated on goal difference.

At the end of that season, Germany would go on to win the World Cup on home soil and it seems liked Campbell enjoyed playing against the big names:

You were always aware of who you were playing against because the players were so famous. And it wasn’t only Bayern (Ed - with Beckenbauer, Breitner, Muller, Hoeness and more).

There was the great Monchengladbach team with Gunter Netzer. There were great players playing for Frankfurt at the time like Jurgen Grabowski.

And there were two players for FC Koln, which was the bigger team in the city: Wolfgang Overath and Heinz Flohe — he was a brilliant player and probably my favourite at Koln.

Campbell played 29 times in the Bundesliga and stayed with Fortuna after relegation. He played 33 of their 38 league games as they finished fifth in the re-organised 2.Bundesliga. They were fourth the following year but didn't threaten promotion again in Campbell's time.

1976/77 was his most prolific in Germany, scoring eight goals in 36 games in the second tier including two in a big 3-0 win away to Wolfsburg. His final season in Germany was 1977/78 with his final goal coming in a 3-1 away win over Tennis Borussia Berlin in October.

After undergoing surgery on his knee three times he had to miss out on a move to Hamburg and retired from full-time football in 1978. 2 years later he made a brief comeback at Shamrock Rovers and made a handful of appearances for the Hoops. He was Johnny Giles's assistant at Rovers and even managed the club for a spell in 1983.

While with Fortuna Koln, Campbell would add 10 more international caps to the one he earned with St Pats.  In 1972 he became the first man to play for Ireland while playing his club football on mainland Europe, and he remains the only player to earn caps while in Germany.

His last cap came in controversial fashion as he was sent off minutes after coming on as a sub as Ireland lost a World Cup qualifier 2-1 away to Bulgaria in June 1977. 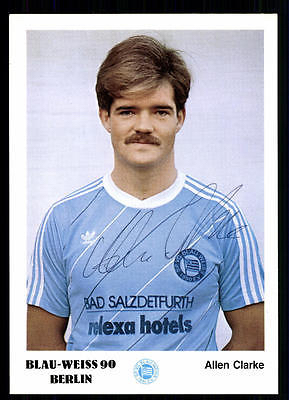 Dubliner Alan Clarke took the more traditional route to fame and fortune for Irish footballers when he left for England at an early age. However he didn't flourish at Leeds United and without having played a senior game, he moved to Germany aged 20.

He signed with Borussia Lippstadt in the regional Oberliga Westfalen (third tier) before moving on to Hammer in the same league the following season.  In 1984 Clarke signed for Blau-Weiss 90 Berlin in the (second tier) 2. Bundesliga. That first season Clarke's side finished seventh (becoming the highest ranked Berlin side in West Germany). A year later the Blue-Whites won promotion to the Bundesliga with Clarke scoring four times along the way including the third in this win over FC Koln in April.

The 1986/87 season would be the only season in the Bundesliga for Clarke and Blau-Weiss 90 Berlin. He started their first game of the season where despite a goal from Karl Heinz Riedle (who'd go on to win the World Cup with Germany less than four years later), Berlin lost 4-1 at home to Kaiserslautern.

Two weeks later they'd get their first win of the season when, losing 2-1 at home to Borussia Mönchengladbach, Clarke came off the bench to inspire Berlin to a late 3-2 win.

Unfortunately, injury kept Clarke out of the team for nearly six months but he returned in April to feature in most of Berlin's run in. That included starting in the Olympic Stadium as Bayern Munich won 2-0 on their way to winning their third successive title.

Blau-Weiss 90 finished bottom and were relegated back to 2.Bundesliga (never to return). He ended the season with 15 appearances in the Bundesliga.

Clarke remained with the club for another couple of season (playing nearly 50 more league games for the Blue-Whites) before dropping a  division to play for Tennis Borussia Berlin (themselves a former Bundesliga team) in the regional third tier. He helped them win the Oberliga Berlin in 1990/91 but lost out on promotion to 2.Bundesliga in the play offs. 1991/92 was his last season with Tennis Borussia Berlin, and his last in the professional ranks in Germany.

Unlike Campbell, Clarke stayed in Germany and played local football for a couple of years before transitioning to a new profession, and a new sport. He turned to golf, attempting to become a touring professional, before settling into the life of a resident golf club pro. He currently resides in Berlin and is the club pro at Kallin Golf Club.

You might argue the third Irish man to play in the Bundesliga took the most conventional route of all, seeing as it was his local league. Patrick Kohlmann was the son of a German man and an Irish woman, who spent time as a kid in his mother's home town of Trim.

Kohlmann joined the youth side of Borussia Dortmund at an early age and received his first call up to the Irish national teams when Brian Kerr picked him for the under-18s in 2000. In 2002 he made his league debut for Borussia Dortmund II (the reserve team). The following year he made the first of five appearances for the Ireland under-21 team.

Kohlmann was called up to the Borussia Dortmund senior team for the 2004/05 season. On the 13th November Kohlmann became the third Irish footballer, and the first not to be born in Ireland, to play in the Bundesliga when he started for Borussia Dortmund away to Kaiserslautern. It was a nightmare start for the defender as he suffered a serious injury just before half time and had to be replaced. He would never play another first team game for the German giants.

He left Dortmund after the 06/07 season to play for Erfurt in the regional leagues before joining Union Berlin and helping them win promotion to 2.Bundesliga in 2008/09.

He'd spend six seasons with Union in the second tier before dropping a league to play for Holstein Kiel in 2014. After three years there, Kohlmann retired from playing in 2017 and took up coaching with the team in Northern Germany.

At the start of 2019/20, German-born Conor Noß (Noss), sat on the Borussia Monchengladbach bench for a couple of games but has yet to appear for the senior team.  The 19 year old was part of the Ireland under 18 and under 19 squads last year.

Aside from these Bundesliga players, there have been other Irish lads to play in the lower leagues in  Germany.

After earning eight caps for Ireland playing with Bohemians, full back Eamon Gregg joined Vfl Lubeck in the German third tier for a year in 1980. He was joined by journeyman LOI striker Eddie Byrne. After being released by Newcastle in 2003, another full back Joe Kendrick played 10 times as 1860 Munchen II (the reserve side of 1860) won the regional fourthh tier.

We've also seen a number of German-born players called up to Irish underage squads too in recent years.  Selcuk Tidim was born in Hamburg but played for the Irish underage sides all the way up to under-21 level while playing with the youth sides of St Pauli and Hansa Ronstock II.

Perhaps, the most high profile recent case was Ryan Johansson of Bayern Munich who, it has emerged, is unlikely to represent Ireland again.  Johansson has since moved to Spain.  Spanish born defender Anselmo Garcia McNulty has featured in the Irish underage setup for the past few years and is currently with Wolfsburg.

With the Bundesliga now targeting talented youngsters playing in England, perhaps we'll see a couple of Irish players make the move. We can only hope that someone joins Campbell, Clarke and Kohlmann in the list of Irish men who've played in the Bundesliga soon.

Quiz: Can You Tell Us From Which County These 15 Irish Footballers Hail?

Football
1 month ago
By Eoin Harrington
Borussia Dortmund Boss Rose Rallies Against Didi Hamann Criticism
Football
2 months ago
By Gary Connaughton
Exciting Bundesliga Prospect Reveals He Is Eligible To Play For Ireland
Football
2 months ago
By Eoin Harrington
Jude Bellingham's Incredible Solo Goal For Dortmund Needs To Be Seen
Popular on Balls
Football
1 day ago
By John Dodge
These Are The Irish Footballers Who've Received Ballon D'Or Votes
Rugby
7 hours ago
By Colman Stanley
Jimmy O'Brien Announced His Arrival On The Biggest Stage This Afternoon
The Rewind
11 hours ago
By Gary Connaughton
Quiz: From Which Irish County Did This Company/Product Originate?
Football
14 hours ago
By Gary Connaughton
Carragher Reveals Unhappy Instagram Message From Lionel Messi After MNF Comments