Belgian scoffs at Ireland's 'sore butt' defeat to Belarus were short-lived, with the Red Devils struggling to a 1-1 draw with Finland in their final Euro 2016 warm-up.

Across the continent, 'tis the season for newspaper pull-outs providing vague previews of the opposition, and Colm Murphy has sent an absolute beaut to our Euro 2016 Facebook group (join here) from Belgium's most popular newspaper - the Dutch-language Het Laatste Nieuws.

It's clear from Het Laatste's analysis of Ireland that despite our perceived lack of talent, they're concerned about the physical, defensive approach of Martin O'Neill's men.

As translated by Colm Murphy, the Belgian prognosis reads:

A dangerous opponent. If the match is only decided on quality and talent, the Belgians will win with double digits. A fair ensemble play in the Premier League, but nothing more impressive than mid-table sides like Everton and Southampton. The greatest talent actually lies on the bench. Roy Keane, the 44 year-old Manchester United icon, is the assistant coach. However: the enthusiastic direct and concise football style of the bears of the Irish island did cause problems in the qualifiers for Germany - the Mannschaft did not get past the double wall more than once. The duel in Bordeaux becomes a masterclass for the Red Devils. How will they dismantle an ultra-defensive Irish side? 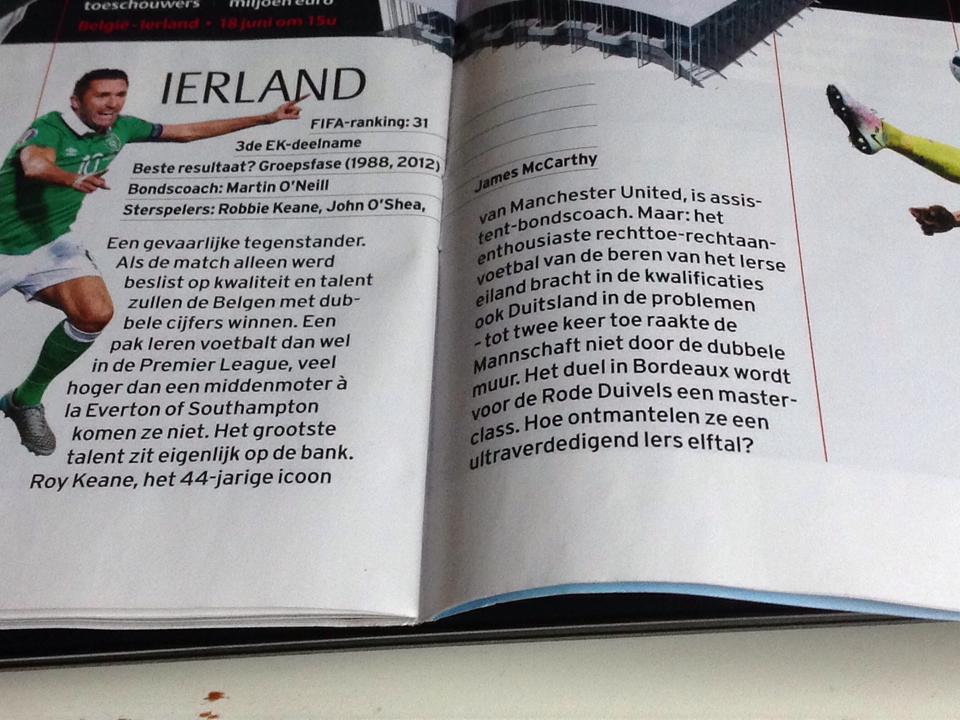 'The Bears of the Irish Island'? We'll take that. Meanwhile, the newspaper lists Robbie Keane, John O'Shea and James McCarthy as Ireland's 'star players', perhaps disregarding Jan Vertonghen's comments having faced both Shane Long and Jon Walters in the Premier League this season.

You could find yourself in France, enter now! https://t.co/KLOSBe7Hut

Perhaps more pertinently, Het Laatste Nieuws are pretty much spot on bar the comment about double digits, but of course it wouldn't be like Irish football fans to take that kind of arrogant, condescending bullshit personally, right?

A massive thanks to Colm and also to James Kavanagh for his help in identifying the newspaper. Meanwhile, the craic is 91 over in the Balls.ie Euro 2016 Facebook Group, which you can join here.

Football
1 week ago
By Andrew Dempsey
Italians Dominate Official Euro 2020 Team Of The Tournament
Football
3 weeks ago
By Eoin Harrington
Italian Football Was Its Most Glorious, Shithousing Self Tonight
Football
4 weeks ago
By Gary Connaughton
Roy Keane Labels Portugal Star As 'An Imposter' After Portugal's Euros Exit
Previous Next

Football
1 week ago
By Andrew Dempsey
Italians Dominate Official Euro 2020 Team Of The Tournament
Football
3 weeks ago
By Eoin Harrington
Italian Football Was Its Most Glorious, Shithousing Self Tonight
Football
4 weeks ago
By Gary Connaughton
Roy Keane Labels Portugal Star As 'An Imposter' After Portugal's Euros Exit
Popular on Balls
Olympics
16 hours ago
By Andrew Dempsey
'She's A Superstar': Swimmers Heap Praise On Mona McSharry Ahead Of Olympic Final