Five member of the Italy squad who won Euro 2020 have been named in the official Euro 2020 team of the tournament, picked by a team of UEFA Technical Observers. The team also includes three Englishmen, as well as one from each of the beaten semi-finalists, as well as a Belgian.

Gianluigi Donnarumma, Leonardo Bonucci, Leonardo Spinazzola, Jorginho and Federico Chiesa were all selected after helping the Azzurri to their first European Championship in 53 years.

The Italian quintet all played a key role in their Euro 2020 success, with Donnarumma also being named as UEFA’s player of the tournament.

Gianluigi Donnarumma is the first goalkeeper to be named Player of the Tournament at the Euros 👏 pic.twitter.com/mq6LDO92O6

Runners-up England also had three players named in the team.  Manchester City duo Kyle Walker and Raheem Sterling earned their spot after impressing for Gareth Southgate's side who reached the final.

Sterling played in all of England’s seven Euro 2020 games, and scored three goals in the process.

He also won a questionable and decisive penalty during their semi-final victory over Denmark.

Meanwhile, Manchester United central-defender Harry Maguire, who missed the first two games of the tournament with injury, was also named.

Danish midfielder Pierre-Emile Hojbjerg also earned himself a place in the team along with Spain’s teenage sensation Pedri.

Spurs' Hojbjerg starred in the absence of Christian Eriksen for the Danes, whereas Barcelona’s Pedri established himself as one of the many breakout stars of the competition.

Belgian forward Romelu Lukaku completed the line-up. This was despite Roberto Martinez’s side crashing out of the competition in the last-eight against Italy.

The 28-year-old scored four goals in five games for Belgium, and missed out on being top scorer behind Cristiano Ronaldo and Czech Republic striker Patrik Schick who netted five goals apiece.

The breakdown of the team includes five Premier League players and five Serie A players (with Donnarumma on his way to Ligue 1). Pedri was the sole representative of La Liga.

Euro 2020 Team of the Tournament

SEE ALSO: 'It's Coming Home' Chant Was Big Motivation For Bonucci And Italy 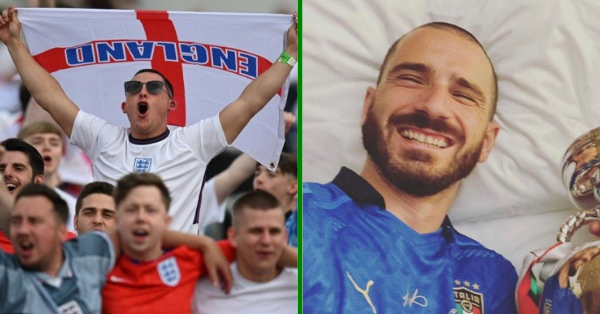