It's Only May, But Irish Fans' Optimism Is Seriously Kicking In Ahead Of Euro 2016

Half of Irish football fans believe Martin O'Neill's side will emerge from our Euro 2016 group, which contains Sweden, Belgium and Italy.

Yes, we're still 38 days away from tournament kick-off in France, but 50% of Irish football fans have already let their imagination get the best of them, and the rest reckon Ireland will reach at least the Last 16.

As part of their #FootbALLorNothing campaign, Life Style Sports conducted a study amongst Irish football fans to find out what exactly they feel are the best moments in Irish football history, and perhaps more importantly, to discover what incredibly mean things they'd be willing to do to loved ones in order to get to France. Standard practice, really. Sacrifices have to be made.

But while the pint glass is at least half-full for half of our football faithful, it might be half-empty if you're currently engaged to an Irish football supporter; all we can say is we'd advise against putting down any deposits until July at the earliest.

Almost 30% of those questioned revealed that they would be willing to miss their own wedding to attend Euro 2016 - this figure, rather bizarrely, a full 6% higher than those who would be willing to pull a simple sickie from work. Ghosts of recessions past, and all that. However, one Irish follower revealed that he has already packed in his employment in anticipation of a journey to the host nation.

19% of Ireland fanatics admitted they would skip a family member or close friend's big birthday or occasion, while a number of students suggested they'd be willing to skip their Leaving Cert or college exams. Sure there's always August! Or, you know, another entire year of school.

'Come On You Boys In Green' and 'Olé Olé Olé' received an almost identical portion of votes (one-third) in the running to be crowned the nation's favourite song to belt out from the stands (Please Note: singing is only only permitted when we're winning this year - we're not going over there for a sing-song). 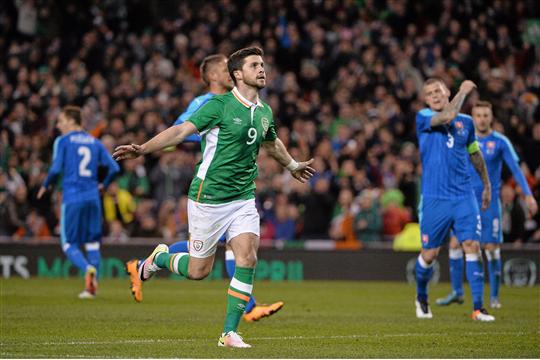 Just under half of people quizzed as to their preferences named Roy Keane as their favourite footballer to ever wear the green jersey, while just over half named Shane Long their favourite of the current crop (Big Jon Walters, farcically, polled at just 21% in the same category).

Irish fans famously bring something extra to big tournaments; flagons of cider, for one thing. And yet, for all the seas of green that have invaded foreign lands such as the States and Japan over the decades, it's the homecoming scenes following Italia '90 which resonate most with the average punter - half of them in fact.

And so, with Italia '90 nostalgia in mind, Life Style Sports have told us that they are teaming up with Umbro to give fans the chance to be part of the Ultimate Football Fan Experience by recreating the open top bus tour from the summer of 1990, to honour a group of lucky Irish fans ahead of the final home friendly against the Netherlands on Friday, 27th May.

To get involved, all you have to do is buy an Ireland jersey in Life Style Sports between now and May 22nd and you will be entered into a draw to win tickets.

Football
1 month ago
By Balls Team
Watch: Bask In The Commentary From Around The World For That Brady Goal
1

Football
1 month ago
By Gary Reilly
Watch: Robbie Brady's Post-Match Interview Is The Most Beautiful Thing We've Ever Seen
1