Jack Byrne is looking forward to playing in front of the APOEL Nicosia fans once Covid-19 restrictions are lifted in Cyprus.

Upon joining the club, Byrne was briefed about the nature of the supporters.

"I love the hostile environment, the fans expecting you to win every game and do well," Byrne told EJ Menswear's 'The Changing Room' show.

"The fans over here are so involved. They came and weren't happy with a couple of the results, and I think they smashed up a couple of cars in the training ground.

"As a player, you either fold under that pressure or you like it. For me, I like that. I like trying to be the man at a huge club, and show people over here that a young Irish lad coming over can do well.

"I'm looking forward to playing in front of the fans - whether they're behind or you're losing a game and they're pushing you to get another goal - that's what football is all about.

"Different culture, different country and a different way fans do things. When the fans came to the training ground there just after Mick (McCarthy) got the sack, the ultras were on the pitch, we were training and they were having a chat with the board.

"I do like it. There's a pressure involved in it. There's pressure on myself to do well and try to make something over here."

Byrne made the move to Cyprus in early January. Two days later, Mick McCarthy - one of the main factors in Byrne joining the club - was gone.

"There was nothing I could do. The ink was dry," said Byrne.

"Obviously, I love Mick. I’ve huge respect for Mick, he gave me my Ireland debut, he had me in Ireland squads. And as a person I can’t speak highly enough of Mick. He took a chance on bringing me here.

"I knew the president here and the board wanted me as well. They reassured me when Mick left.

"It's not only [about] England or Ireland. I've played in Holland before and I loved my time out there. When chances come available, that you can go new places and meet new people, why not take them?

"I’ve only played two games now, played a half an hour, 40 minutes yesterday (Sunday), played 20 minutes the weekend before that. So it’s going to take me a while to get used to it and see what it’s like, but it is technical. They want to get the ball down, they want to play. The new manager that is after coming in here really wants to play football.

"They expect that at this club because it’s the biggest club out here, they are used to winning trophies, winning leagues, being in Europe every year.

"They plan to be in Europe. And that was one of the big factors why I came here in the first place, European football, and they’re really hungry to get that.

"Hopefully I can be a part of that."

You can watch the full interview with Jack Byrne below.

See Also: 15 Of The Finest Post-Match Interviews Ever Recorded 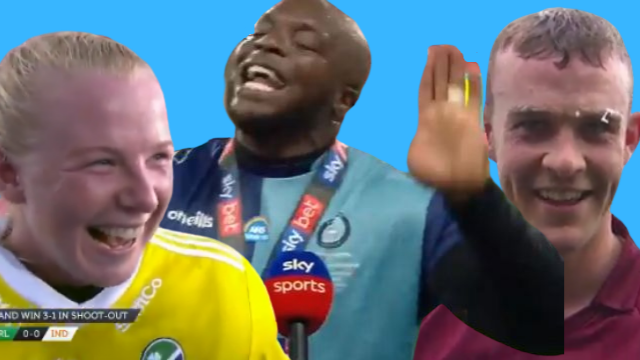