A supreme spin and shot past Hakon Opdal was just reward for Jack Byrne who helped Shamrock Rovers to a 2-1 victory over SK Brann to progress to the next round of the Europa League 4-3 on aggregate. 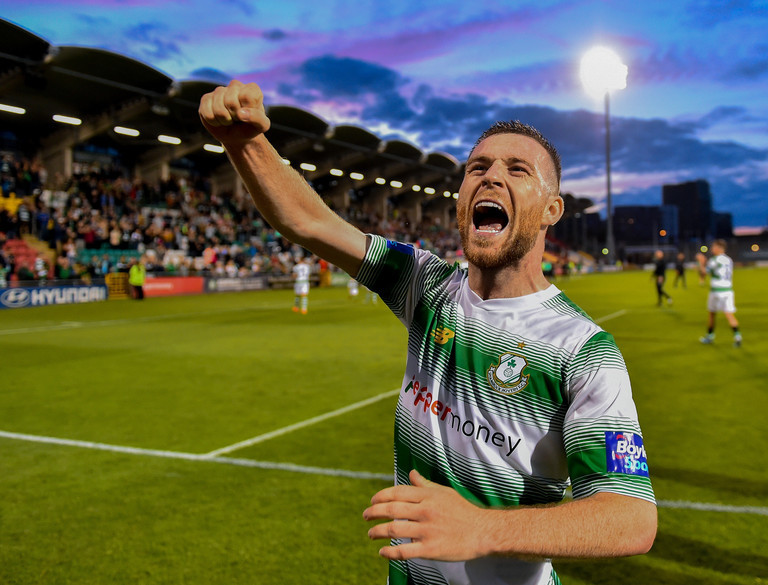 Twice the Tallaght Stadium patrons invaded the field in celebration as Byrne's magic instigated pandemonium. His was a performance of precision and persistence, a fantastic passing spectacle that a small but vocal travelling Norwegian support were still discussing as they had the short journey back to their hotel after the game.

A second-half breakaway goal had Rovers behind but shortly after Byrne made it all square.

Simply beautiful turn & finish from @Jackb_8 to put Rovers back ahead in the tie ???

He turned provider for the second, setting up new boy Gary O'Neill after some good work by substitute Dan Carr. The post-goal celebrations will likely attract further UEFA attention.

Good finish from Gary O'Neill after a brilliant counter attack as Rovers take the lead on the night and surely secure their place in the next round. #LOIinEurope pic.twitter.com/WaunmH4j0g

It means another European tie awaits for Stephen Bradley's side who will take on Apollon Limassol in the next round.

There was no such delight for the other two Irish teams. Cork City secured a 2-1 away win against Luxembourg's Progres Niederkorn but went out 4-3 on aggregate. A spirited St Patrick's Athletic lost 2-1 away to IFK Norrköping which included a stunner from midfielder Conor Clifford.

SEE ALSO: The Future Of The Ireland Under 19s Squad According To Football Manager

Football
1 week ago
By Balls Team
'They Suspended Me Again For A Tweet: Two Emojis They Said Referred To The Club'
6

Football
1 month ago
By Michael McCarthy
Did Jack Byrne Do Enough To Force His Way Into Irish Squad For Slovakia?
Previous Next

Football
1 week ago
By Balls Team
'They Suspended Me Again For A Tweet: Two Emojis They Said Referred To The Club'
Football
3 weeks ago
By PJ Browne
Jack Byrne Performance Gives McCarthy 'Plenty To Think About'
Football
1 month ago
By Michael McCarthy
Did Jack Byrne Do Enough To Force His Way Into Irish Squad For Slovakia?
Popular on Balls
The Rewind
2 hours ago
By Gary Connaughton
Tiger King's Doc Antle Appeared In One Of Most Iconic MTV VMA Performances Ever
The Rewind
3 hours ago
By Gary Connaughton
Watch: Backstreet Boys Recreate 'I Want It That Way' Video In Isolation
5