As Brexit bumps and shudders along, it has become clear that the DUP are happy to grittily stand against what might serve them best.

Out of a similar recklessness for self-interest, Arlene Foster gave up her evening to travel to watch the Republic of Ireland play the kind of bloodless, goalless and pointless football for which they now stand.

The FAI were eager to use this game as the latest episode in the tightening of cross-border ties. The cover of the match programme featured an illustration of John Giles and George Best arm-in-arm, with John Delaney found inside citing his invitation to speak at the IFA's AGM, the ovation IFA President David Martin received at the FAI's shindig in August, and the agreement to try and co-host the U-21 Euros in 2023 as proof that relations between both bodies are healthy. That Martin O'Neill's middle name is Michael, and Michael's Martin went, sadly, unsaid.

Once the game started, the Republic's players continually gave the ball away, perhaps as a further gesture of goodwill.

As has become the well-remunerated reality, the Republic didn't fashion a chance of any note from play in a game in which their goalkeeper was the best player.

The complete absence of attacking intent has become so regular that it engenders little but a kind of numbed ambivalence; this is the new norm.  We have long since reached the final part of that Emily Dickinson description of death: "First – Chill – then Stupor – then the letting go –".

More interesting was what was happening in the stands.

Vast swathes of empty seats were evident even when Michael D. Higgins was greeting the players, but the stands suddenly swelled prior to the anthems. God Save The Queen was then greeted with an intense and loud chorus of boos, sustained throughout.

It was the worst-received visiting anthem this reporter has heard since the Aviva opened, and that included the same anthem before England played an equally desultory 0-0 draw in 2015.

The only real target for jeering in that game was Raheem Sterling, who was forcing his way out of Liverpool at the time. (Proof that the Aviva is often filled with fans who, in the words of a wise Irish philosopher, follow the Queen's football teams).

There were murmurings of "James McClean hates the fucking Queen" from the Irish singing end once this game kicked off, but these were soon swallowed by defiant shouts of "I'm Ulster 'til I die" from the Havelock Square End.

James McClean, naturally, proved to be the magnet for all passions. Everytime he touched the ball he was booed by the Northern Ireland fans, which triggered a wave of fevered, full-throated adulation from the home fans.

McClean was chided throughout with renditions of "James McClean, you're one of our own", a song adapted by a group of Northern Ireland fans before the game for new Garda Commissioner Drew Harris, once of the PSNI.

Harris has promised to treat whistleblowers with the utmost respect, and amid the tumult McClean stayed on the right side of the man in that role tonight. While he hurtled into tackles, there were no bookings in a game that was played in the kind of good spirit that springs from barren stakes.

When he was substituted, both crowds scrapped for volume to the point that there were a number of different, staggered crescendos as McClean trotted across the field.

The intense start to the game soon lost its oxygen. The football the Republic are currently playing is sufficiently arid to strip the passions from any political situation. As the home fans settled to watch their customary fare, they only ever truly stirred when it came to defending James McClean.

Meanwhile, the visiting fans ran through their repertoire. "We're not Brazil we're Northern Ireland" got an outing, as did the Kyle Lafferty song: "He's seven-foot/He plays the flute/Kyle Lafferty".

Lafferty was introduced as a substitute in the second half to a loud chorus of boos, but he is not the first Rangers player to be met on the Landsdowne pitch with hostility: Tore Andre Flo was in Dublin during the summer to promote a Chelsea friendly at the Aviva, saying his main memory of Dublin was being booed during a Norway friendly in 2003.

Glenn Whelan got a rapturous send-off, and was then given a farewell presentation at half-time in front of a quarter-filled ground. Even the reward for his best work goes unseen.

The night was thankfully free of atavistic or incendiary chanting; the only offensive emblem on show was a flag in the Northern Ireland end emblazoned with their bewilderingly-jolly version of Mr. Tayto, who, let's be honest, wears the exaggerated cartoonish grin of pure evil. 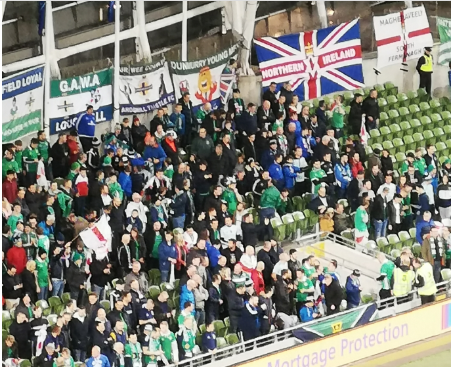 Muted chants of "You're just a small town in Europe" were about as current as things got all night.

The game ended as it began, cloaked in ambient jeers. As the home fans grew restless amid the realisation that this would be a third-straight home game without a goal, there followed a cascade of boos.

These weren't aimed at God Save The Queen, however.

They were for Martin O'Neill.

Football
2 weeks ago
By PJ Browne
'When I Go To Ibrox Or Tynecastle, You're Getting Called A Fenian Such And Such'
210

Football
2 weeks ago
By PJ Browne
'When I Go To Ibrox Or Tynecastle, You're Getting Called A Fenian Such And Such'
Football
1 month ago
By Gary Connaughton
Linfield's 'UVF' Kit Is Really Causing A Storm In Northern Ireland
Football
2 months ago
By Balls Team
'And Up Yours As Well' - Jack Charlton On The Famous Row With Billy Bingham
Popular on Balls
GAA
17 hours ago
By PJ Browne
'It's Not All About Winning Underage. It's About Building Players And People'
3