'Do You Want The God’s Honest Truth? They Are A Bunch Of Cowards'

James McClean has hit out at the English football authorities for their lack of action in response to the persistent anti-Irish racism he suffers.

Earlier this month the Republic of Ireland international revealed the sickening abuse he has received in a birthday card. He posted a picture of the card on social media. It included vitriolic references to Hitler and Bloody Sunday as well as lengthy personal abuse.

It is just the latest in a persistent stream of abuse sent towards the Derryman and as for as he is concerned, the FA's silence on the matter has been telling.

Do you want the god’s honest truth? They are a bunch of cowards, the footballing authorities. A bunch of hypocrites. Sterling is this and that. A hero and getting awards. What I get week in, week out, compared to what he’s got in one week, one game? For the last seven, eight years there hasn’t been a word.

They are a bunch of hypocrites. A bunch of cowards. 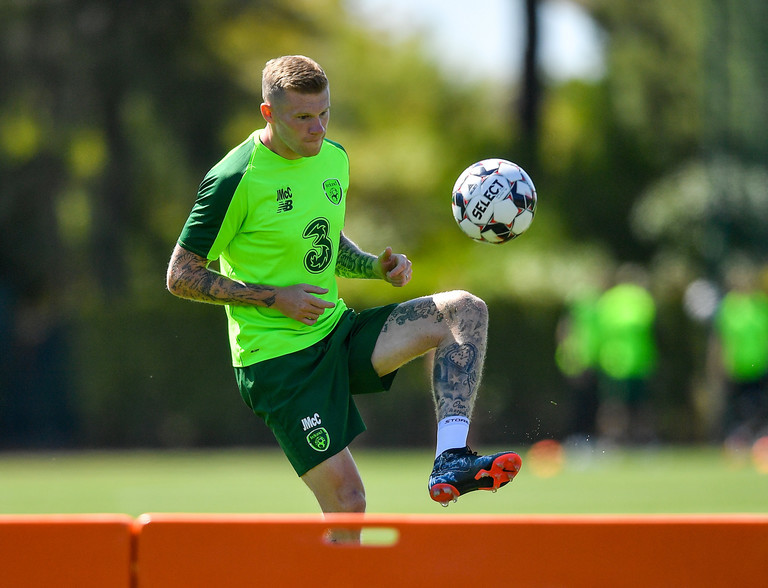 McClean has been a target for a number of years due to well-documented political reasons and his choice not to wear the poppy. He maintains he's used to it now and his only motivation in posting the card was to expose contrast in responses.

Like I said the last seven, eight years, for me it is just water off a duck's back. The reason I put it up is to highlight the fact if I wasn’t a white Irish guy there would’ve been something bigger. I was right in doing that because there was still nothing. It proved my point right.

Again, to put it bluntly. I'm a white Irish man. That doesn’t matter to them. The same thing happened to Neil Lennon, he gets abused about being Irish and no one does anything. The proof is in the pudding. You’re a white Irishman, nothing changes.

The 30-year-old is calm and articulate throughout. It's not so much anger as it is acceptance. 'It is what it is,' he mutters with an emotionless expression.

He is quick to point out if he was in Dubai, they wouldn't force him to wear a Burka. Why should England try and impose their principles on him? He's not asking for any special treatment, just the standard one.

"It’s pretty clear what has to change it. What they are doing with the whole Sterling thing. Don’t be a hypocrite, do it for whatever kind. Racism, sectarianism it is all the same. Discrimination."

James McClean was speaking at the Aviva Soccer Sisters Dream Camp in Aviva Stadium where over 100 girls were given the opportunity to play on the same pitch as their international heroes. See aviva.ie/soccersisters or check out #SafeToDream on social media for further details.