Ireland face a couple of key games next month, but as has become custom during the Stephen Kenny era, they will be missing a number of players.

Sheffield United defender John Egan has been ruled out due to a dislocated toe, while winger Callum O'Dowda also looks likely to be sidelined as he continues to get over his long-term fitness issues.

You can now add another player to that absentee list.

Stoke City boss Michael O'Neill revealed before yesterday's loss to Brentford that James McClean is set to miss 'four to six weeks' due to a foot injury:

McClean had an injection on a foot injury so the time frame for him is four to six weeks.

That means he is highly unlikely to feature in the qualifier in Serbia on March 22nd, with a friendly against Qatar and a second qualifier against Luxembourg to follow in the days that follow.

Stephen Kenny has certainly become used to selecting from a reduced player pool during his Ireland tenure. The 2020 international windows were plagued with injuries and covid related issues, with a huge number players ruled out.

For example, by the time the final fixture of the November international window against Bulgaria rolled around, 14 players that had been named in the original squad were unavailable for selection.

That type of misfortune certainly affected Ireland's performances, although it was still no excuse for their incredibly poor run of results under the new manager.

Kenny will be hoping this will be the last of his injury concerns, but with the Serbia game still over three weeks away, that is certainly no guarantee. 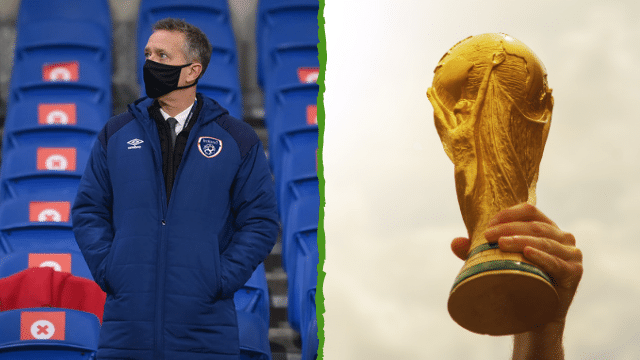 Football
6 months ago
By Colman Stanley
Nathan Collins: Taking a Family's Football Legacy To New Heights
Football
6 months ago
By Jonathan Byrne
Stephen Ireland's Son Joshua Gets Republic Of Ireland U18 Call-Up
Football
9 months ago
By Andrew Dempsey
James McClean Takes One Last Parting Shot At Stoke City Boss Michael O'Neill
Popular on Balls
Football
3 hours ago
By Eoin Harrington
Juan Mata Questions Manchester United Management After Dire Season
Golf
2 days ago
By Gary Connaughton
Padraig Harrington Glad He Didn't Have To 'Make A Decision' On Saudi Golf League
Football
1 day ago
By Gary Connaughton
The Frank Lampard Love-In After Everton's Survival Was Downright Bizarre
GAA
2 days ago
By PJ Browne
'It Came At An Awkward Time. I Didn't Think It Would Be So Bad'