Jason Knight scored his first goal of the season for Derby as his side drew 2-2 with Luton in the Championship.

The Ireland international put Derby 2-1 up in the 60th minute, turning superbly in the box to open up space for a shot after Tom Lawrence's through ball. Knight's strike went through the legs of Luton goalkeeper Simon Sluga and hit the net.

"I was just talking to BBC Radio there, I can't say I meant between the legs, but I meant on target, so I'll take it!" Knight told Rams TV after the game.

40 minutes earlier, it was Knight who set up Lawrence for the opening goal of the game. After winning the ball just outside the Luton box, the Dubliner played in his teammate.

"We've worked on winning the ball higher up the pitch. It's going to give you those opportunities," Knight said.

Two sloppy goals cost Derby what would have been just their fourth win of the season. In the 83rd minute, Derby goalkeeper Ryan Alsopp left his line to claim a cross but failed to get there before the head of Luton's Elijah Adebayo.

"We had a great reaction with a very good goal from Jason Knight," Derby manager Wayne Rooney said after the game, "but then obviously it’s a clear mistake from Ryan Allsop which has cost us three points".

Derby remain rooted to the bottom of the Championship with just four points following their 12-point deduction for going into administration.

Watch: Plymouth Score Comedy Rain-Soaked Goal For The Ages In League One 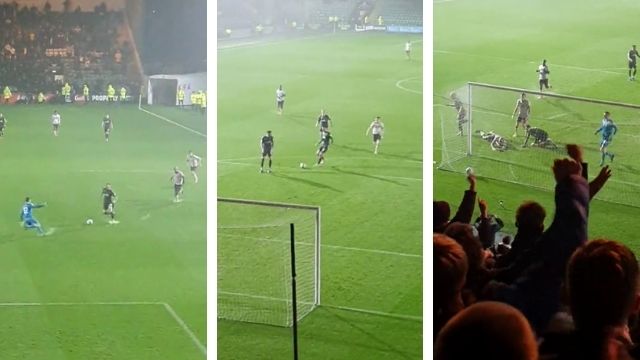