Jeff Hendrick Had The Perfect Reaction To John Egan's Goal

We're still a bit shook after watching Ireland nearly beat Portugal Wednesday night. It took a star turn from one of the world's greatest players - and a scandalous refereeing performance - to stop Ireland from stealing a result in Faro. After a few bad months, John Egan's goal had us all believing again.

The FAI were kind enough to release some touchline video footage of Egan's headed goal from Wednesday night. The FAI's videographer Matty Turnbull happened to be encamped in front of the Irish end when Aaron Connolly won the corner that Jamie McGrath would rocket off the forehead of the Sheffield United player and into Rui Patricio's net.

It's a great alternative angle on the goal that also captures the Ireland celebrations after the goal.

It's the best footage you'll see all year 🤩

Celebrate with @JohnEgan92 after his goal in Portugal

While there were a lot of 'come on's', 'well done's' and pumped fists, we especially loved Jeff Hendrick's attitude to the celebrations.

Arriving a few moments behind the celebrating pack, Hendrick implores his teammates to savour the moment.

'Stay! Stay! Stay!' he shouts just as the Ireland team began to head back to their half of the pitch.

It's possible Hendrick wanted his teammates to take a second to truly appreciate the brilliant feeling of going up 1-0 on the Eur0 2016 champions in their own back garden.

Or the Artane man was already thinking about stealing a few precious second  to eek out a 1-0 win over one of Europe's giants.

Either way, his heart was in the right place. Ireland would hold out for 89 minutes before Ronaldo got the better of them.

The result might have gone against Ireland but it was one of the best performance from an Ireland team in years.

Stephen Kenny's men will face Azerbaijan at the Aviva tomorrow afternoon, and for the time during the Kenny era, Ireland fans will be present to cheer them on.

SEE ALSO: Ireland's Portugal Performance Will Count For Little If They Can't Follow It Up Against Azerbaijan 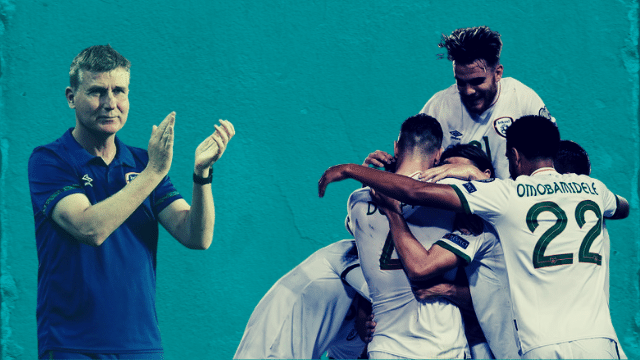 Football
1 year ago
By Eoin Harrington
Matt Doherty On Spurs Travails: 'I’m Starting To Turn The Corner'
Football
1 year ago
By Balls Team
Millwall Manager: Parrott Should Have Come Off Sooner
Football
3 years ago
By Mark Farrelly
Breaking: Harry Arter Included In Ireland Squad For Denmark And Wales
Previous Next