There are a number of exciting young Irish talents coming through at the moment, but few have more potential than Evan Ferguson.

The forward first came to the attention of the Irish footballing public after playing against Chelsea as a 14-year old in a pre-season friendly for Bohemians back in 2019, going from strength to strength since.

Ferguson was linked with all of the biggest clubs in England in the months that followed, ultimately opting to sign for Brighton. He would make the move across the Irish Sea soon in January of this year, a few months after his 16th birthday.

He has already impressed at the club, starring for their U23 side despite often coming up against opponents much older than himself. That includes a cracking brace against Liverpool back in April.

Having made his senior Brighton debut in the Carabao Cup a couple of weeks ago, the player has also been nominated for the PL2 Player of the Month for August after three goals in three appearances.

The 16-year-old striker has been nominated for August's #PL2 Player of the Month award. 🏆

Now, Ferguson has been rewarded with a call-up to Ireland's U21 squad.

The Meath native would come off the bench during the win against Bosnia & Herzegovina on Friday, becoming the first 16-year old to feature at that level for Ireland since 2006.

Despite the major step up in age groups, Jim Crawford said Ferguson has been far from phased since his arrival into the squad.

Speaking ahead of their game against Luxembourg tomorrow, the Ireland U21 boss said that he can already see what a talent Ferguson can become.

He’s come in and he hasn’t looked one bit out of place, that’s for sure. He’s been excellent in training. There are even crossing and finishing drills that he’s been excellent with his movement. For somebody so young, he has a good understanding of the game.

Can he improve? Of course, he can. He’s a fine specimen of a boy. He’s big, he’s strong, he can hold it up, he can run in behind. It is exciting — and probably the most important thing for me is he’s a good character.

He understands he’s far from the finished product. He’s willing to learn, ask questions and he’s an exceptional character, so we’re delighted to have him here.

As long as he’s with us, we’ll work hard to help him develop into the player he can become. I’m delighted with him.

Certainly a player to keep your eye on in the near future, starting with tomorrow's European Championship qualifier. 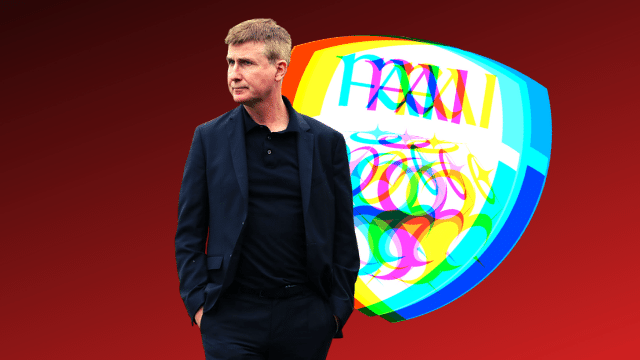