Six Years After All-Ireland Win, Jim McGuinness Is Ready For His Biggest Challenge

Jim McGuinness remembers reading an interview with Steven Gerrard. The now Rangers manager disclosed some guidance Jurgen Klopp had given him shortly after he had taken up a coaching job in the Liverpool academy. It resonated with McGuinness.

Around this time, having just left as assistant to Roger Schmidt at Chinese Super League side, Beijing Guoan, McGuinness was contemplating the next step of his career.

Klopp's words convinced him it was time to take the leap and become a manager or head coach rather than an assistant.

"When I read that, I just thought that all my experiences have been in that environment of observation; when I went to Celtic originally or then as an assistant [in China]."

Last week, six years after his first steps from Gaelic football to association football were taken, McGuinness was announced as manager of Charlotte Independence on a three-year deal. The North Carolina side play in the United Soccer League, the second tier of the American game.

McGuinness was open to joining a team in the League of Ireland - he had a number of offers from sides in the Premier and First Division. The short and long-term visions outlined by those in charge of Charlotte convinced McGuinness it was the right move. That long-term ambition includes the building of a new stadium for the 2022 season and one day becoming an MLS team.

"This is a direct quote from Brendan Rodgers from a conversation we had: he said 'Jim it's not about getting a club, it's getting the right club,'" told McGuinness.

Through it all, McGuinness has been counselled by some trusted confidants, including golfer, Paul McGinley, and businessman, Dermot Desmond, who is also the largest shareholder in Celtic. McGuinness credits Desmond as a major influence for where he finds himself in his career. "He’s the man who’s taken me from one sport and brought me into another."

In 2012, six weeks after winning the All-Ireland with Donegal, McGuinness agreed to join Celtic as a performance consultant. Joining the club while Neil Lennon was the manager, he would go on to also work with Ronny Deila and Brendan Rodgers and progress to coach at U16, U19 and U20 levels.

McGuinness did not grow up in a soccer environment. As a young sportsman, his only experience of it was playing twice a weekend during the winter with Kilmacrennan Celtic. It was more about staying fit for the GAA season than a love for the game. "I'm not a guy who spent all my childhood around soccer pitch with my dad being a soccer coach - I'm not that kid, I'm another kid," said McGuinness.

Starting from the bottom rung, McGuinness has done all his coaching badges through the FAI. He now lectures on their UEFA A and B courses. In January will begin the final part of his coaching certification when he starts the UEFA pro licence course. 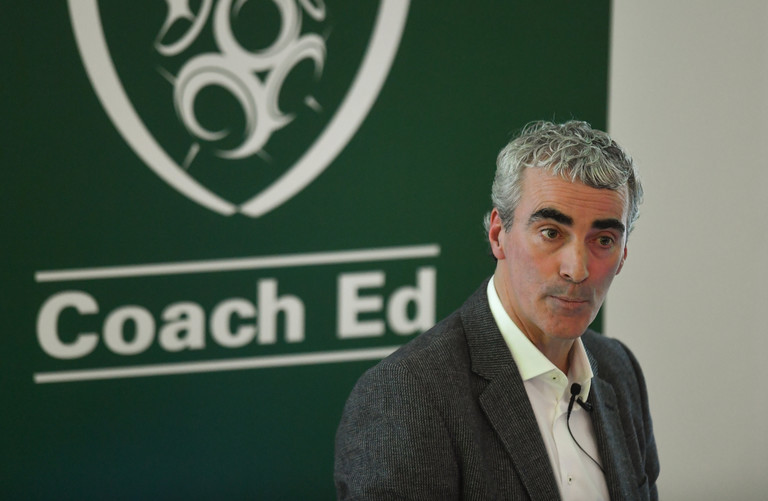 The Glenties man's transition to another sport came about by chance.

He's good friends with another Donegal native, Mick McGinley, father of the golfer, Paul McGinley. After a year (2011) which saw Donegal win their first Ulster title in 19 years, Paul McGinley decided he wanted to consult McGuinness about managing a team - he had the ambition of captaining the European Ryder Cup side. McGinley senior set up the meeting that Christmas.

McGuinness travelled to Mick McGinley's home in the village of Dunfanaghy in north Donegal. A meeting with Paul McGinley which was supposed to last an hour ended at four o'clock in the morning. Following that discussion, McGinley, obviously impressed with the then Donegal manager, told Dermot Desmond to keep an eye on his progress.

It set in motion a chain of events which eventually led his appointment as Charlotte Independence boss.

We won Ulster again [in 2012] and then we won the quarter-final against Kerry and I got invited over to Celtic Park for a Champions League game. I thought, 'Fantastic, I'm a Celtic supporter, I'll take that.'

"Then I came back and we won the semi-final and I got invited over to another Champions League game and I thought 'This is a bit strange but you know I'll take it.'

Then at that stage the chief executive Peter Lawwell took me out to the VIP room off to the boardroom and he said 'What do you think?'

I said 'What about?'

He said 'About joining the club?'

That was the first time I knew anything about it.

Then there was nothing on it then until after the [All-Ireland] final. Dermot invited myself and Yvonne to Dublin. He's been the catalyst of all this. He'd been tracking me sort of if you like.

As have Mick and Paul, they've been people that have been really, really important to me. Personally, I've gone on this journey and they've helped facilitate and mentored me along the way.

Their support is really important to me and I continue to receive their support and every decision that I've made to this point, including this one and the last one to go to China.

The two met while McGuinness was at Celtic and struck up a rapport. They stayed in touch via email and when Schmidt got the Beijing job, he asked McGuinness to join him.

In his first football job as the man with the final say, McGuinness's approach and the style with which he ultimately hopes Charlotte will play will draw from every experience of his coaching career. 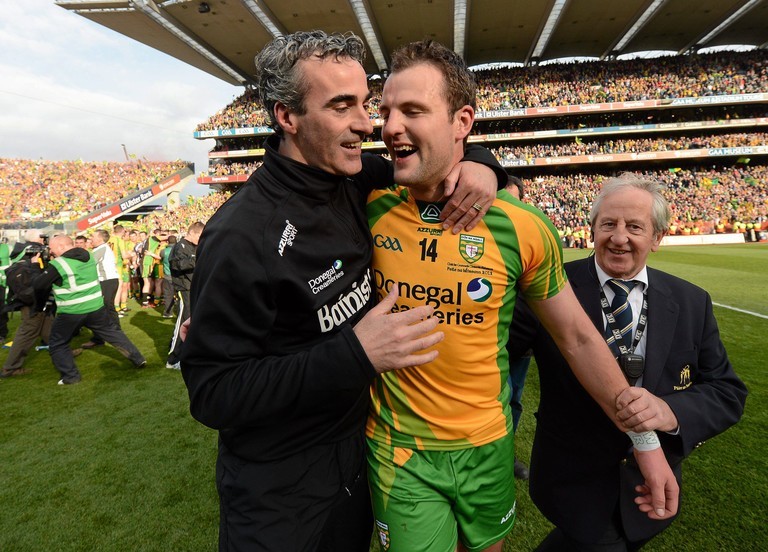 "A lot of the things we were doing in Donegal will be relevant. We were trying to build a system on intensity and overwhelm the opposition, create and be aggressive on the transition.

"At the same time, possession based football, like Brendan plays at Celtic, and having the capacity to break teams down will be very important.

"There’s the capacity to force the game and that’s what Roger did brilliantly. The game was played continually on the transition.

"If I was to describe it in a few sentences I would say the capacity to play the game through the thirds but also always looking to be aggressive and dynamic and direct as part of that.

"I think to an extent, Liverpool play that type of game. They can play ball, there's no doubt about that. They can build the play and play it through the thirds. But you'd have to say they're very dynamic and they like to play in the transition and in behind. They've got pace, they're not afraid to play a vertical pass."

McGuinness wants a close, focussed group in Charlotte, one where everyone feels important - he doesn't believe in big squads.

What he does believe in: embracing a challenge. It's why he moved sports.

"There’s a saying in psychology that ‘fear lies in the unknown’.

"They understand all the different variables that can happen within a game and they have a game plan in their head for that so you don’t get this ‘rabbit in the headlights’ moment. That for me is coaching.

"Six years is a short period of time when you are involved in something like this, but it’s a long stretch as well in terms of the experiences that I’ve had.

"I think I’m out the other side of it now and I’m ready to stand on my own two feet now and move forward."

Football
2 months ago
By PJ Browne
Quiz: Can You Match The Senior Football Championship Cup To The County?
Previous Next

GAA
1 day ago
By Maurice Brosnan
Inside The Most Dramatic Declines In Irish Sport
Football
1 week ago
By Gary Connaughton
Jack Grealish's Father Believes Gaelic Football Made Him The Player He Is Today
Football
2 months ago
By PJ Browne
Quiz: Can You Match The Senior Football Championship Cup To The County?
Popular on Balls
Football
14 hours ago
By Gary Connaughton
McCarthy Stresses Form, But Will He Practice What He Preaches In Irish Midfield?
10