As one of Ireland's best ever defenders, we thought of celebrating today by recounting his "Iron Curtain" performance in Moscow yet again, but there was possibly an even more heroic moment in Dunne's career - taking on Joey Barton in a bar room brawl after the his teammate slapped a 15-year-old boy.

In Barton's autobiography, "No Nonsense," released in 2016, the now manager of Bristol Rovers goes into some detail about one of the most controversial incidents in his life, his alleged assault on a 15-year-old boy during a Manchester City pre-season tour in Thailand.

Richard Dunne, Barton's former Man City team-mate got caught up in the controversy surrounding the incident at the time but was cleared of any wrongdoing by his then-manager, Stuart Pearce.

Barton has offered his own version of events in his book, starting the tale thus:

When Dunney had the bright idea of ordering a couple of bottles of wine, and then a couple more, the tenor of the night was set.

Events then proceed where Barton ends up getting into an argument with an Everton fan and his 15-year-old son, who Barton alleges kicks him in the shin. When Barton responded by slapping the boy, things got a bit heated.

(The boy's dad) slipped away to complain to Dunney, whom he recognised from his time at Everton. I went back to my pint, and was soon confronted by the 'Honey Monster', who was as buried in the booze as I was.

'Fucking get over there now and apologise!' he screamed.

Dunney grabbed me by the throat, and pushed me back against the wall. He was raging, oblivious to my warning that he had precisely two seconds to let me go. He was bigger and stronger than me, so wrestling was out of the question. I turned feral, and sank my teeth into his fist as hard as I could. He roared, let me loose, and involuntarily looked down to see that I had drawn blood.

I rugby tackled him before he could react, pushing him backwards across the room. Bystanders were bulldozed out of the way, human skittles in bizarre game of bar billiards. Our momentum took us over some steps and into a secondary tier, where Dunney crashed through a glass coffee table.

While Dunne gathers himself, Barton ponders his next course of action and concludes that he will grab a pint glass with intention of "smashing it across Dunney's head", only for his efforts to be foiled by the couragous figure of Tim Flowers while 'Dunney' is "screaming blue murder."

Barton is then led away. But the story doesn't end there:

In the distance I could hear Dunney screaming: 'Why is this happening?' He was being frogmarched to a secure area and was so out of control he kicked a plant pot, breaking a bone in his foot. He would miss two key internationals for the Republic of Ireland.

Barton appears to have got his facts wrong here, though. He says that the incident happened after a 1-1 draw with Bolton in the Premier League Asia Trophy that Man City ended up losing 5-4 on penalties. This was in 2005, and reports indicate that Dunne did break his foot kicking something on his way out ("a door", most seem to say). But, contrary to what Barton says, Dunne didn't miss Ireland's friendly against Italy or their World Cup qualifiers against France or Cyprus. 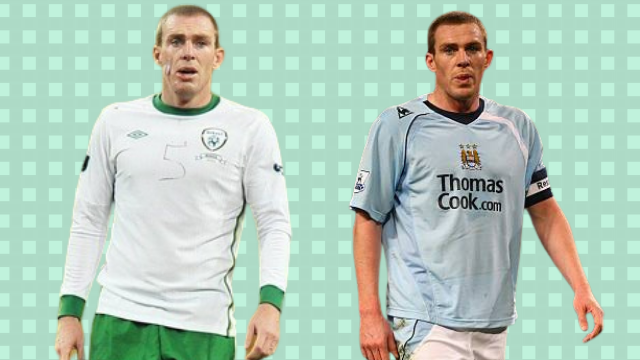 Football
2 months ago
By Gary Connaughton
Joey Barton Apologises For 'Holocaust' Comments After Newport Loss
Football
4 months ago
By PJ Browne
Stephen Ireland Explains Why He Hated Playing With Joey Barton
Football
9 months ago
By PJ Browne
Joey Barton Throws Players Under Bus After Curtis Relegates Bristol Rovers
Popular on Balls
GAA
2 days ago
By PJ Browne
Insane Drama As Late TJ Reid Goal Sends Ballyhale Into All-Ireland Final
Rugby
1 day ago
By Colman Stanley
Yesterday Was Not The First Time Wayne Barnes Sent A Player Off For Getting Lippy
Rugby
22 hours ago
By Colman Stanley
Champions Cup Predictions And Permutations For The Irish Provinces
The Rewind
2 days ago
By Jonathan Byrne
The Definitive Ranking: Deli Items Ranked From Best To Worst