Eamon Dunphy and John Giles described as "cruel" and "heartless" UEFA's decision to back Denmark and Finland into a corner over the restarting of their European Championship game following the collapse of Christian Eriksen on the pitch.

"UEFA, apparently, we didn't know at the time, but they insisted that the two teams had a choice: One was to go out and finish the 50 minutes that was left or to play the next day at 12 o'clock," Dunphy said on his podcast, The Stand.

"Peter Schmeichel has come out today and declared that UEFA didn't give them any choice, except when they wanted to finish this game, which seems rather cruel, to put it mildly."

"All they are concerned is a football tournament, and these lads having gone through what they went through. To be putting football, and the fixtures in front of a situation like that, is absolutely outrageous.

"Why didn't they give them a point each? Nobody would have complained. All they are worried about is the fixtures in a situation like this."

Dunphy and Giles on 'greedy' UEFA

The two also took issue with the ball being brought onto the pitch by a toy car for Friday's opening game.

"We all know how avaricious the people that run football are at club level, and it's probably worse with FIFA and UEFA," said Dunphy.

"There was a moment at the beginning of the tournament, the Italian game against Turkey, where the referee had no ball when he went to the centre circle.

"The ball came out in a little toy Volkswagen car. Volkswagen are one of the principal sponsors. I just thought, 'How greedy... How many ways will they find to actually get an extra few shillings? It was really quite disgusting.

"It couldn't have been a lot of money, but obviously the sponsor suggested or maybe insisted that they do this. It was actually wrong."

Giles added: "I saw it going on the pitch. I knew straight away, 'This is an advert, this is a moneymaker'. It's cheap, a few quid extra. It shows you what they're like in a commercial situation." 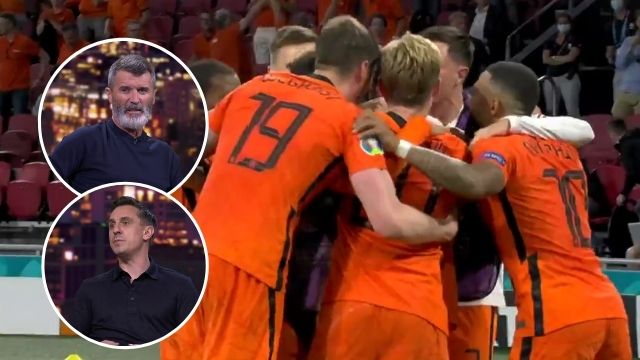