The Mayor of Waterford.

That is how Rio Ferdinand compared the status of a particular defender when I interviewed the ex-England international. He was referring to the time Manchester United toured Ireland one pre-season long ago when a young Irishman, fresh to the senior scene at Old Trafford, came along for the ride.

Ferdinand had recently become the world’s most expensive centre-back when Alex Ferguson’s men landed in Waterford that summer. In terms of fan adulation, United’s new £30million star used to worldwide acclaim was forced to step aside. John O’Shea, from Ferrybank on the Waterford-Kilkenny border, had arrived in town.

O’Shea didn’t crave the attention, of course. It’s just, he had little choice. The boy wonder was home. 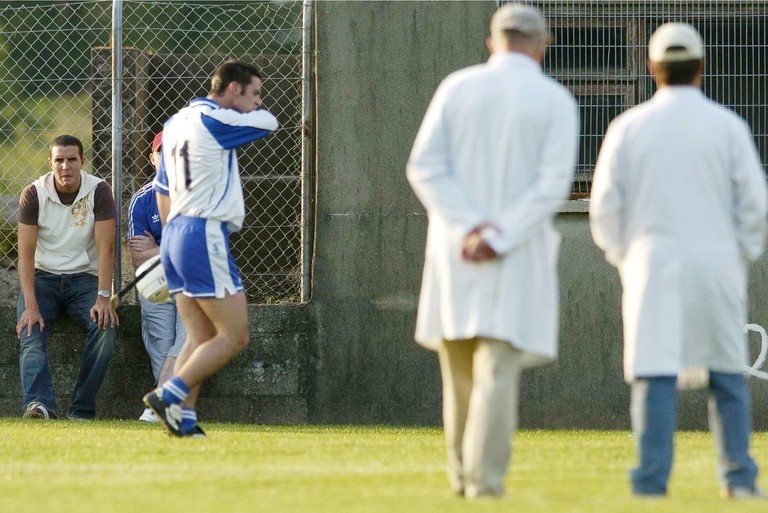 Not long before the aforementioned interview, O’Shea had scored an unlikely last-minute equaliser away to Germany in a vital Euro 2016 qualifier.

It was typical that he would save his finest moment in a Republic of Ireland shirt for his 100th appearance. With 116 caps (and counting) and two European Championship tournaments under his belt, he is a contemporary Irish sporting stalwart, representing a dying breed of great Irish players who have played at elite European clubs.

This past month, 15 years after pulling off that now-legendary nutmeg on the former Ballon d’Or Luis Figo, O’Shea has been named Sunderland fans’ player of the (admittedly rotten) season.

Quite a lot has happened in the intervening years with so much achieved en route. And still, his name alone continues to conjure that one dominant memory among many Manchester United supporters.

23rd April 2003. 15 years ago today. A date permanently etched into all of our minds for one reason and one reason only. The day John O'Shea nutmegged Luis Figo. We will never forget.pic.twitter.com/w28hkOJdeo

That April evening in 2003 marked the end of the road for United’s Champions League campaign as they fell at the feet of a Ronaldo-inspired Real Madrid. But John O’Shea had officially arrived, delivering on the grandest of club stages. United would finish that season as Premier League champions having regained the title from Arsenal.

O’Shea played a huge role in this championship-winning side, his first, excelling at left-back despite his slightly awkward-looking, heavily right-footed tendencies. This guy had clear class, demonstrated most prominently in his performance during the 6-2 demolition of contenders Newcastle United at St James’ Park.

Four years would pass before United celebrated another Premier League victory but when they did, it was O’Shea who once more played a key role.

Tormenting Merseyside, he scored an injury-time decider in a pivotal 1-0 win at Anfield in spring 2007 and followed this with an equally important strike away to Everton.

Their achievements aligned, however unusual at times. For instance, the pair share the slightly inauspicious feat of collecting a Champions League winners’ medal without playing a minute of the final – Keane, injured and suspended in ’99 against Bayern and O’Shea, an unused substitute in ’08 against Chelsea.

They have also been connected in unhappier times. O’Shea was one of the victims of Keane’s infamous 2005 MUTV interview when he turned on certain teammates to such a vociferous extent that it signalled the end of the Corkman’s time at United.

O’Shea survived the chastising though he never fully regained a regular first-team place. Even so, he remained an integral member of the squad. Winning an FA Cup and three League Cups, O’Shea also added four additional Premier League crowns – including three in a row between 2007 and 2009 – to his increasingly glowing cabinet of silverware.

Along the way, he created more magical moments, most notably his delicate and incongruous chip away to Arsenal in what was an otherwise chaotic occasion, on and off the pitch. His facial expression when the ball hit the net has gone down in history.

There was also the time he played in goal for the closing minutes of a 4-0 victory against Tottenham Hotspur at White Hart Lane. Displaying fine handling skills in his brief cameo, the impromptu performance earned O’Shea the prestigious honour of having represented Manchester United in every single position on the pitch.

It demonstrated the regard in which Ferguson held for his stellar utility man that O’Shea was guaranteed a start in the 2009 Champions League final against Barcelona, having missed out the previous season.

O’Shea returned the favour by playing admirably on the night. However, United were soundly beaten by an era-defining Barca team and when the sides met again at the same stage two years later, there was no place for O’Shea in the squad.

His time at Old Trafford was up and off to Sunderland he went where he has remained ever since. Now in his 38th year, the club has a decision to make this summer regarding their supporters’ player of the year as they drop down to League One under new ownership.

With his contract at the Stadium of Light set to expire, the future is wide open for this Waterford warrior.

This is the story of a modest man who maximised his opportunity and talent while never taking it for granted.

From his youth team days at United on loan spells at Royal Antwerp and Bournemouth, he has worked closely on improving perceived weaknesses in his game (he regularly trained on his weaker left foot as a youngster) and has sought to highlight and evolve his many strengths.

Forever improving and never shirking, he is the Rolls-Royce version of the versatile footballer who became one of the most decorated Irish sportspeople of all-time while at Manchester United.

John O’Shea has proved to be a delightfully ordinary man, so often capable of extraordinary feats. Just ask Luis Figo.

SEE ALSO: Ireland's Playoff History - How Robbie Keane Found Himself "In His Element"

Football
1 week ago
By Gary Connaughton
7 Republic of Ireland Matches With Far-Reaching Consequences
Football
2 weeks ago
By Balls Team
Here's The Last Irish Football International From Every County In The Country
Football
2 weeks ago
By Sean Meehan
Stephen Kenny - Ireland Manager: 26 Years In The Making
Popular on Balls
Football
1 hour ago
By Balls Team
Rank Your Favourite 90s Football Italia Heroes
21