In a story that will sound familiar to Waterford fans, Swindon manager John Sheridan blasted his players after his first home game in charge ended in a chastening 3-0 defeat to Accrington.

The Robins never recovered from goalkeeper Joe Fryer’s comical early own goal and further strikes from Colby Bishop and the impressive Dion Charles put Accrington out of sight by half-time.

Sheridan said: “It was a poor display obviously and we know we’ve got to be stronger defensively.

We conceded comical goals and were sloppy all night. Our performance was nowhere near good enough. We gave ourselves a mountain to climb in the first 20 minutes. We have got good footballers in the side but we need to learn how to play a bit differently because this is a strong, tough league.

In this league you do not get away with mistakes. We have got to try and get a system where it will make us stronger defensively. As a team, we concede too many poor goals.

Accrington were gifted the lead when Akinwale Odimayo played a simple pass back to Fryer, who slipped as he attempted to clear and watched in anguish as the ball trickled over his line.

Fryer was also partly culpable for the visitors’ second goal in the 25th minute. Cameron Burgess’s left-wing cross was volleyed goalwards by Matt Butcher and when Fryer came racing off his line to punch the ball away, Bishop nipped in to nod into an empty net.

Swindon’s nightmare first-half was compounded when Charles rounded off an excellent team move from close range to make it 3-0 seven minutes before the interval.

The struggling Robins at least stemmed the tide in the second half but are now without a win in three league games and only one point above the relegation places.

Sheridan, a former Republic of Ireland international, is managing his 4th club so far in 2020. He was sacked by Chesterfield in January. In July, he took over Waterford where he created a number of headlines before departing after just eight games to take over Wigan Athletic. Last week, exactly two months after taking charge of Wigan, he was appointed as the new manager of Swindon. 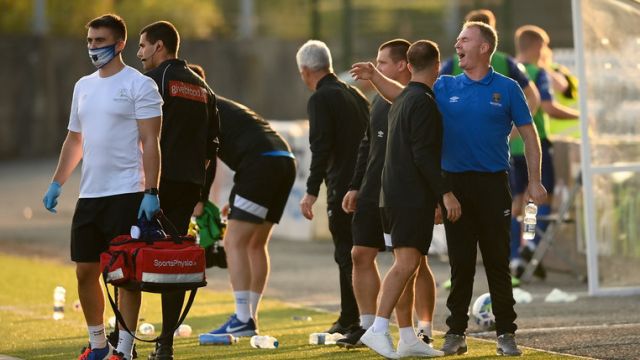