Watch: Irish Midfielder Opens His MLS Account With A Cracker

It's been quite a few days for Dundalk born footballers. On Sunday night, Burnley's Jimmy Dunne scored on his Premier League debut. The night before, Jon Gallagher scored his first ever MLS goal for Atlanta United.

The 24-year-old has been with Atlanta since 2018, having played four years of college soccer for Notre Dame. He played for the club's second team for over a year before being loaned to Aberdeen last season. During this loan spell, Gallagher established himself as a first team player and was recalled by Atlanta for the return of the MLS season in July. Since then, he has finally broken into the first team, and has played in the team's last four games.

On Saturday, the attacking midfielder truly announced his arrival with a stunning left footed shot.

Unfortunately, like Burnley at the weekend, Atl Utd were beaten 2-1 by David Beckham's Inter Miami in the game, and are struggling and sit in 12th place, third from bottom, in the Eastern Conference after 12 games.

After the game, Gallagher spoke about scoring his first goal for the club.

It’s a mixed bag of emotions. Obviously, I am delighted to have scored my first goal. It has been a long time at the club kind of working my way up from the USL team and to have a moment like tonight was really special for me and my family. But as I said, the mixed bag of emotions obviously because the team is in a bit of a tough spell. When you’re out there, after the goal it was more focus on getting a win. Obviously, that didn’t happen

"It has been a long time at the club kind of working my way up from the USL team and to have a moment like tonight was really special for me and my family."

Gallagher was joined in the Atlanta team for the game by Dubliner and former Republic of Ireland Under 21 international Jake Mulraney, who joined the club this year and has scored four goals in ten appearances. 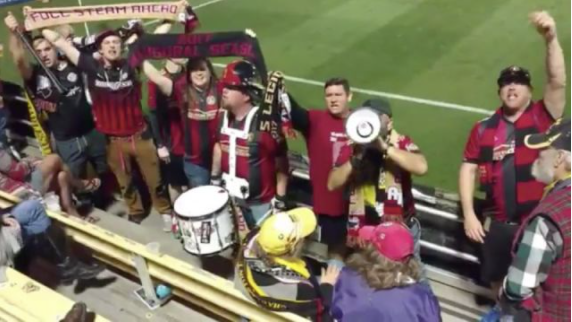