Whatever About The Ref, Can We Appreciate All That Jon Walters Does For Us?

If you had offered Irish football fans a 1-1 draw with Austria before kick-off, the reaction would have been divided as taking 4 points from Austria would represent a success, and it would keep us in a good position while ruling them out of contention. However, this is not a great Austrian side, and many fans would have backed us to do the job at home.

Had you offered Irish football fans a 1-1 draw after 70 minutes of that game however, they would have bitten your hand off, and yet, frustration at having not taken all three points is what will be focused on after the final whistle.

We can moan about the ref, and there are many reasons to, but without the unrelenting effort of Jon Walters, and his knack for thumping one into the back of the net, by the way, we would have been lost at sea.

Not just today, either.

5 - Five of the last seven goals the Republic of Ireland have scored in home qualifiers have been scored by Jonathan Walters. Leveller. pic.twitter.com/v6nZcIAd4e

Put up front, on his own, against two 6-foot plus defenders, he was given absolutely nothing in terms of support, and yet he pulled his markers around, won free-kicks to relieve pressure, and was a constant thorn in the side of Austria.

Where most strikers would throw the hands up in the air and ask for more help, Walters channels that frustration in working harder himself, to the point where it almost guilts his teammates into putting more effort in.

He'll miss chances. He's never been a ruthless finisher and for some reason it seems that the relatively easier chances are the ones that don't hit the back of the net, but he will always be there for them, and more often than not he comes up big when we really need it.

The finish today was outstanding. In the first half he had a similar chance from a very similar position, and he decided to try and place it with venom into the top corner. When he was given a second try, he put his foot through the fecking thing and ran off with his arms in the air.

If that goal doesn't come, it's easy to imagine the visitors holding out. If Austria won that game they would have been one point behind us, breathing down our necks and full of confidence going into their final fixtures, and our unbeaten run at home out the window. It would have been a disaster. 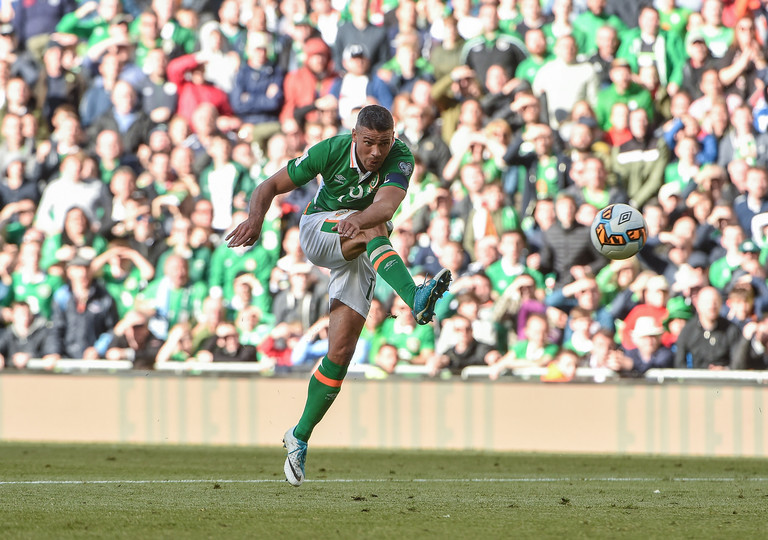 Instead, we're still in a really strong position to qualify for a World Cup at which Jon Walters would be 34. It's not fair on him to keep carrying the burden we are asking him to, but he will keep on doing it until he physically can't.

Some people roll their eyes when we praise the spirit of our footballers after battling back from dreadful starts, which we have to do on a regular basis, but it's the likes of Jon Walters who put their personal pride in the jersey above everything else that have us playing above ourselves. Otherwise we'd just be Scotland (sorry, lads).

Look at the way Walters dribbles. He's got no pace, and can't beat a man, and it always looks as if he's about to be tackled, yet he will always make an additional five or ten yards when he knows he needs to, because he will not allow the defender to get to the ball. He just refuses. He's a nightmare to play against because he wants it more than you, and he'll try harder to win every ball than you will.

He won't make it every time, but it will never, ever be for lack of effort. And when he does come up with that bit of quality to go along with his blood-and-guys workrate, it strikes you just how important he is to this Ireland side.

The man is a hero, and it would be a great shame if he didn't get the recognition he deserved because a Spanish ref has been watching too much of the NBA Finals.

SEE ALSO: The Irish Player Ratings As Ireland Get Out Of Jail Against Austria

Football
2 years ago
By Mikey Traynor
Meyler Wore The Armband, But Several Leaders Stood Up To Be Counted In Cardiff
Previous Next

Football
8 months ago
By Balls Team
8 Things Irish Fans Can Do To Disrupt Denmark Ahead Of Crunch Qualifier
Football
2 years ago
By Mikey Traynor
Callum O'Dowda Starts - The Ireland Side To Play Denmark Has Been Named
Football
2 years ago
By Mikey Traynor
Meyler Wore The Armband, But Several Leaders Stood Up To Be Counted In Cardiff
Popular on Balls
Cricket
12 hours ago
By Michael McCarthy
Irish Commentator Gets Rather Excited On BBC As Ireland Beat World Champions England